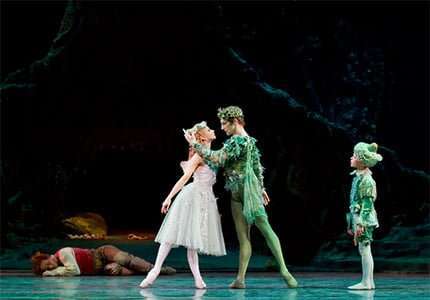 This is a triple bill that works. It has the right combination of moods, music and styles which stimulates and entertains. It starts with The Dream, Frederick Ashton’s masterly distillation of Shakespeare, followed by an abstract new ballet by in-house choreographer Alastair Marriott, and finishing with Jerome Robbins’s surreal The Concert, and, a few minor cavils apart, shows The Royal Ballet in fine form.

The Dream is a difficult work to pull off – fifty years ago Antoinette Sibley and Anthony Dowell created the sparring Queen and King of the Fairies, launching a now legendary dance partnership – it was fitting that both came onto the Covent Garden stage to receive the audience’s acclamation. Steven McRae is in every way Dowell’s successor – his technical mastery of the fiendish turns, footwork and sudden halts is a joy to behold. He allies this facility in the steps with a farouche personality, a volatile temper and a sense of fairy mischief which bring the character of the vengeful Oberon to life – I cannot think of another dancer who could so successfully convey the other-worldliness of the Fairy King. Some can execute the steps well enough (not many!) but often this supernatural side escapes them and Oberon remains admirable as a dancer but unconvincing as a character. McRae is in full command of both (his elevation and speed in the Scherzo were extraordinary) and has deepened his characterisation, making the role emphatically his own – his insouciant shrug when challenged by Titania about the disturbing dream (memory) of loving an ass had just the right amount of faked innocence and secret pleasure.

Would that Roberta Marquez were on the same level, but her Titania remains one-dimensional, as if she cannot quite break out of the idea of the ballet fairy to engage with Ashton’s decidedly more characterful concept. She has improved in the role, not least in the evident care she takes in bending her torso and making her arms both sinuous and seductive, but at all times she remains most resolutely a ballerina executing her steps and does not cross the line into the magic world of becoming Titania. Paul Kay’s Puck was brightly danced – brimming with character, he was mischievous, delighting in the games he plays with the mortals. He worked well with McRae and brought an engaging, irrepressible quality to the sprite. The four mortal lovers were well danced, without exaggeration, and thereby getting the laughs their moves and manners should elicit. Something has gone from the character of Bottom (despite Bennet Gartside’s many talents), and here his hard work garnered smiles rather than guffaws. Ashton gave the attendant fairies some complicated and challenging choreography, so it was particularly gratifying to see the corps de ballet and the four named fairies dancing so well and, crucially, so musically. 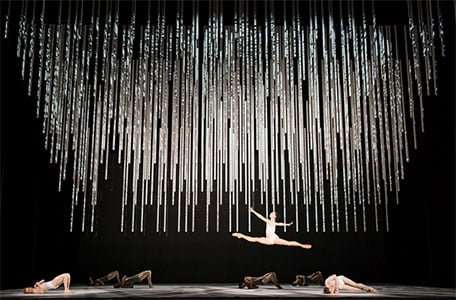 Connectome refers to the map of the connections of the brain, and for his latest ballet Alastair Marriott explores the physiological source of our character and moods. In it, he shows himself to be heavily influenced by the work of Wayne McGregor, the company’s Resident Choreographer and very much in the zeitgeist of marrying science with art. It is an intelligent work, set to four pieces by Arvo Pärt, and intriguingly set on a solo woman, two male leads and four male ‘corps’. Scenically, it is pleasingly sparse, beautifully set by Es Devlin who has created a forest of vertical white poles which rise and fall, enlivened by Luke Halls’s projections. The movement is something of a departure for Marriott, who has also absorbed some of McGregor’s movement vocabulary and involves a great deal of hyper-extensions and complicated partnering. The dancers, clad by Jonathan Howells in what seems to be a spring underwear collection, twist and leap, turn and stretch (Edward Watson must yearn for a costume which is more than a pair of skimpy briefs and movement which does not involve crawling about) but what it has to do with the mapping of the brain is less easy to discern. Most impressive were the four very young male corps dancers, who display estimable physicality without yet having developed the pin-point synchronicity of movement that characterises the ballet world at its highest level. Watson and McRae are so different that the contrast between their physical shapes, their movement quality and their interpretative slant make watching these two superlative artists together a constant pleasure. More of question mark over Natalia Osipova who, perhaps purposefully, seems detached from her fellow dancers – she dances with them, of course, but all too often her inflexions are at odds with theirs, and while Marriott provides much to show off her prodigious physical attributes, not least her spectacular leap, she is sometimes a little ‘lost’ on the stage.

Jerome Robbins’s comic masterpiece The Concert was solidly revived, with all the favourite episodes comfortably in place. Perhaps the past naturally acquires its own gloss, but I found myself wishing for Lauren Cuthbertson’s ‘glamour-puss’ dreamer to be just that bit more ditsy, and James Wilkie’s ‘shy boy’ to be even more painfully so. These are minor criticisms, as a new generation of Royal Ballet dancers take to Robbins’s zany creation with relish. It is a ballet about ballet, a surreal observation of the characters and conventions of concert-goers and a true setting-free of the imagination – dancers become butterflies pursued around by Robert Clark’s slightly manic on-stage pianist, they all put up umbrellas for the ‘Raindrop’ Prélude, and are rushed around like tailors’ dummies. Bennet Gartside is a gloriously lustful Groucho Marx-like husband, hen-pecked by his shrew-like wife (Laura Morera in battle-axe mode), and the ‘Mistake’ waltz in which six corps de ballet dancers constantly get their grouping wrong remains the acme of comic dance. Set with grinning perversity to a selection of Chopin piano music, the ballet is pure, escapist delight, and continues, nearly sixty years after its New York creation, to set the audience and allow its delight to gurgle up in genuine laughter.