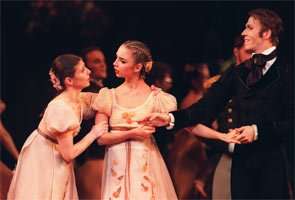 John Cranko’s Onegin makes a most welcome return to London. A 1965 work for Stuttgart Ballet (and still one of the company’s mainstays of repertoire) it was finally acquired by The Royal Ballet in 2001, and ranks as the only saving grace from the late Ross Stretton’s disastrous directorship. It suits the company very well indeed, the tradition of narrative and dramatic work running still strongly through the veins of its dancers, and Cranko’s lyrical choreographic style very much cousin germain to that of his close friend Kenneth MacMillan.

This is a fine, carefully coached revival, with many of the work’s felicities already firmly in place. It is a lean work, coming in at two and half hours, and telling Pushkin’s tale with clarity and aplomb. It centres on a sequence of pas de deux to propel the narrative forward, and contains many moments which are repeated or alluded to later on which bring the threads of the story together. One example to illustrate: in the first scene Madame Larina plays a game with her two daughters, Olga and Tatiana, in which if they look into a mirror, the first man they see in it (behind them) will be the love of their life. Olga is first and sees Lensky, her beloved fiancé. Tatiana is persuaded to do the same and sees Onegin, Lensky’s friend.

In the final scene, some ten years later, Tatiana is now the Princess Gremin and has seen Onegin at a ball given by her husband in their Saint Petersburg palace. She is distressed at having seen him again and sits in her room staring into her table mirror; her husband enters and approaches her from behind and she starts at his reflection. We know that he will never be the love of her life and thereby understand more the subsequent kisses and desperate embraces of her husband, as she tries madly to remain faithful in her mind, as she will try soon after with her body when Onegin enters her apartment. Cranko’s use of these scenic leitmotivs makes this a taught and satisfying telling of the tale. 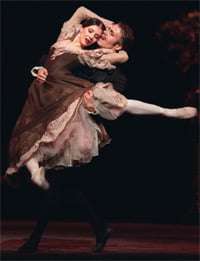 But to the performance. I can only write in the most glowing terms of Johan Kobborg in the eponymous role and Alina Cojocaru as Tatiana. A long established dance partnership, their understanding of each other as dancers and as artists informs their on-stage performance, absolute trust in partnering, an abandon in the knowledge that whatever one does, he or she will anticipate it in the other and react with spontaneity. Kobborg remains a superlative dance-actor, every gesture clear in delivery and every thought behind it comprehensible.

Never before have I seen the core quality of Onegin so brilliantly transmitted – his pride and haughtiness, his schlach, again and again makes him go too far and at each instant (the unnecessarily cruel ripping-up of Tatiana’s love letter to him, the mischievous flirting with Olga, his angry acceptance of Lensky’s hot-headed challenge to the duel, the determination to kill his friend because of a slap to the face), he is then flooded with remorse. And yet Onegin does not learn, and at each instant reacts with wounded pride, only to feel overwhelming guilt again. Kobborg portrays it as I have never seen before, his acting imbued with the subtlety and nuance of the finest ‘straight’ actors. 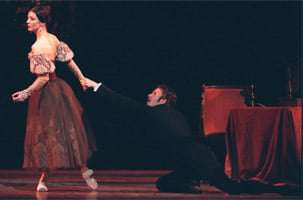 He is matched in all of this by Cojocaru’s superlative Tatiana, who, she too, grades her every action with meaning and pathos. Her virginal disbelief at the sensual nature of her dream (Cranko has her fall asleep after having written ‘the’ letter and engage in a charged pas de deux with Onegin who steps out of her bedroom mirror) gives way to exultation at her burgeoning sexuality and abandon to the fantasy of Onegin; it is wonderfully wrought by Cojocaru during a daring and physically demanding pas de deux. She crowns it all with a remarkable final scene when she painfully relents to Onegin’s pleadings but finally tears herself away and, as the Princess Gremin, orders him to leave. A searing final scene which left her, Kobborg and the audience emotionally shattered.

Steven McRae made his role debut as Lensky and was in fine form. We all know of his technical mastery (the first part of his pre-duel solo was adroitly performed), but it was in the second more expressionistic section that we saw another, more intense side to McRae, promising much of him in dramatic roles. It was good to see him cross the ‘boundary’ and we can only hope that, as a virtuoso, he will be also be cast in dramatic parts. 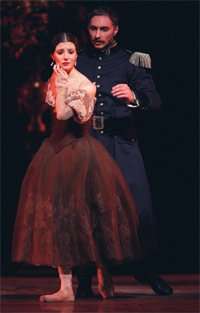 Akane Takada came to the company in 2008 as an apprentice after winning a prize at the Prix de Lausanne competition; two years later she assumes a major role in the opening performance of the season. Technically very assured (wonderful balances and elegant, sharply pointed feet), she easily conveys the youth and ebullience of Tatiana’s younger sister, Olga, but as yet does not have the stage experience to bring out her coquettish qualities, those qualities which make her so attractive and also frustrating to Lensky; Takada needs to convey more clearly the foolish quality which blinds her to the effect she is having on the young poet as she dances ever more carelessly with the malicious Onegin at her sister’s name day party.

Bennet Gartside impressed greatly as the Prince Gremin, his first glimpse of Tatiana at that party marked by a thunder-struck quality which makes it no surprise that he determines from that moment to have her as his own. His pas de deux with Tatiana at his ball ten years later was a masterclass of sympathetic partnering on a dance level, but also in the depiction of tender love – Cojocaru also makes touchingly and tellingly clear her deep affection (rather than passion) for him.

Cranko is less sure with his treatment of the corps de ballet and ‘extras’ and, if truth be told, a discreet veil must be drawn over the choreography for the ball and the preposterous old grotesques who people Madame Larina’s party for Tatiana; but we don’t come to Onegin for them, and they are a small price to pay and easily forgotten as we focus on the central characters.

Sets and costumes are after Jürgen Rose’s 1965 originals, and while the latter remain fine (even if I have never liked Tatiana’s old rose ball gown and mud-brown day dress for the final scenes) and the outdoor settings evocative (the location for the duel is particularly atmospheric with its Corot-like trees) his interiors desperately need re-design, with their clumsy attempts at false perspectives and being saddled with acres of faded lace and trim.