The road to hell is paved with good intentions and behind The Royal Ballet’s disastrous new triple bill lies a perfectly laudable good intention: to allow the company to work with three living choreographers. Monica Mason is quite right to have one eye on the future, for no matter how lustrous the company’s back catalogue of works (its repertoire is without doubt the richest in the world), the future must include new work. However, what the good old RB seems to have forgotten is that it is not simply enough to be alive; one has to be good too. Of the three ballets on offer, two are utterly devoid of classical choreography of any kind and the third shines merely in comparison with them.

William Tuckett is a fine character dancer for The Royal Ballet, and the company continues to be loyal to one of its sons by staging his works. He has been most successful in recent years with his fusion of movement, song, words and narrative in such works as The Wind in the Willows, Pinocchio and, lately, The Thief of Baghdad. But all these pieces have been small in scale, all presented in the Linbury Theatre, and all essentially destined for children. Here Tuckett takes to the main stage and promptly reduces it in size by the means of Lez Brotherston’s monumental, ugly set.

Tuckett’s is a small choreographic talent best suited to the small-scale, and in The Seven Deadly Sins he seems unsure how to expand his vocabulary to fill the void. His answer is to become over-fussy, gimmicky and vulgar. Using the extensive dance resources of The Royal Ballet – at a matinée he employed no fewer than four principals in bit parts – he has created a non-dance dance work, for there is not one scrap of meaningful choreography in the piece, not one movement whose nature or quality makes one take note, not one step of beauty or intrinsic meaning.

Criminally under-using fine classically-trained dancers, Tuckett plods his way through the seven sins, except that nothing in the bump and grind of a tedious half an hour evokes Sloth, Pride, Anger, Gluttony, Covetousness or Envy – they all become Lust with Tuckett falling into that old trap of trying to épater les bourgeois of Covent Garden. So we have crotch-groping, knicker-grabbing and troilism and it matters not one bit because we are all bored and desperate for the two Annas to get back to Louisiana, for the curtain to fall and for us to get to the bar.

For the record, I salute the four singers, who gave their considerable all despite being amplified and utterly unintelligible; I liked Martha Wainwright’s expressive rendition of the text, but miss the eighty-a day throatiness which seems right in the music; and I applaud the dancers, not least brave Kristen McNally as Anna II, for putting up with this tosh and giving it their best shot.

The Seven Deadly Sins was, however, a walk in the park compared with Mats Ek’s Carmen. In what my esteemed colleague Clement Crisp has termed the annus horribilis of the late Ross Stretton’s directorship of The Royal Ballet, the acquisition of Carmen must count as the nadir, so utterly misguided, so totally devoid of choreographic talent, so ugly and, at 49 excruciating minutes, so long. Why this waste of time has returned to the repertoire while so many masterpieces by Ashton, MacMillan, Cranko, de Valois, Fokine and Nijinska moulder away in the cupboard goodness only knows. 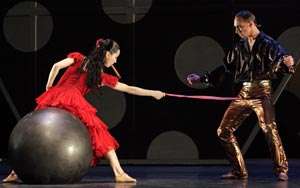 Carmen was a vehicle for Sylvie Guillem first time round, and here it is Tamara Rojo who dons the red dress of shame. Rojo is an artist of world class and a dancer of exquisite beauty so she can be forgiven for wanting to let her hair down and have a bit of fun; it is the management of the company who should be ashamed to present this worthless work to the public – London deserves better than Ek’s tasteless, un-erotic farrago. 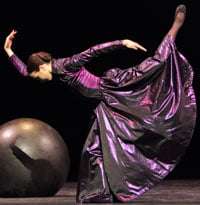 It starts badly with Shchedrin’s vulgar arrangement of Bizet – more percussion than sense – in which the music from the opera does not suffice so we are treated to two interpolated numbers from l’Arlésienne. So, pots and pans heard accompanying choreographic bric-a–bric seen. Ek has achieved international status through his radical reinterpretations of the classical repertoire – his mad-house Giselle has left an indelible stain in my mind – and here he gives his cooky Scandinavian twist to Mérimée. It is very much a north European’s view on the south, rather like those Renaissance artists painting exotic animals they had never seen.

So just as Breughel gives us lions and elephants which look nothing like the real thing, Ek gives us a world of movement which evokes nothing of Spain or indeed the Spain seen through French eyes that both writer and original composer created for us. He plays fast and loose with the narrative, introducing new characters, notably ‘M’ who is Micaëla but also apparently represents Motherhood, and juggling events around. In terms of movement, he has a limited palette, based more on earthbound and stomach-centred modern dance than the aerial quality of classical ballet; that in itself can be fine, but the effect is boring: his musicality tends to the obvious and all too often a gesture or movement accompanies the latest ping, plonk or thud emanating from the pit.

Rojo was an earthy Carmen, happily puffing away on a huge cigar and entering fully into the finger-twiddling, bottom thrusting tackiness with gusto. Thomas Whitehead gave his all as Don José, as did all the brave cast even when called upon to shout and scream in cod Spanish – it was all rather like a therapy session for retired Costa del Sol cabaret performers. They clearly needed to get something out of their system. 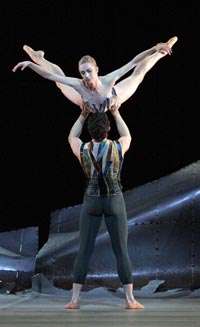 Chirstopher Wheeldon’s DGV came as something of a relief after all this nonsense. Not that it is a great work – far from it – but at least we got to see a ballet company actually dancing. It is over-burdened by Jean-Marc Puissant’s set, which looks like a motorway accident involving a lot of chicken wire; the costumes are ugly, but at least Wheeldon understands classical dance. Set to throbbing Nyman, it is divided between four couples and a corps de ballet in the familiar Balanchinian structure of a couple for each movement and a coda when they all appear together.

The work is littered with favourite Wheeldon movements and poses, the outstretched arms jerked in as if placing a hat on the head, the torso horizontal in profile, legs straight and in an inverted V shape. He shows his usual facility with pas de deux which tends to blandness and an over-use of complicated lifts. But it is a well-crafted work, which responds intelligently to the music and shows an understanding of the classical vocabulary.

The matinée cast was instructive: many hopes for the future took main roles and among them shone Melissa Hamilton who danced the central pas de deux with Rupert Pennefather. They both gave assured and flowing performances, comfortable in all the demands Wheeldon places upon them. Hamilton is fast drawing attention; rejected by The Royal Ballet School and thought unpromising by others, she was taken up by Masha Mukhamedova, who discerned her talent and who, in private tuition, prepared her for entry into The Royal Ballet. She has a beautiful line, lovely feet and legs and an easy, unforced quality of movement. Pennefather is rapidly developing into a dancer of note, very much in the self-effacing mode of yore, and no the worse for that.

Steven McRae, who blazed his way into the company a few years back and who admittedly is recently returned from injury, was underpowered and no match for the fizzing Laura Morera. McRae’s star is in danger of being eclipsed by Sergei Polunin, whose début on Wednesday as Solor sent the audience buzzing into the night and who here impressed again, although he needs to look a little more interested in his partner than he did with an assured Mara Galeazzi. The corps de ballet looked ragged, but then I couldn’t blame them – it was the first time they were properly dancing in the entire bill.

In all then, a poor evening. Were I to give a star rating, it would be one star alone, and that for the long-suffering audience so they don’t feel it was all a monumental waste of time and money. The dancers seemed happy enough, but then dancers are always happy to dance; it is just the poor old audience who have to sit through it all. This is without exaggeration the worst programme this company has presented in many a year and it is sincerely to be hoped that this is a path down which it will never go again.