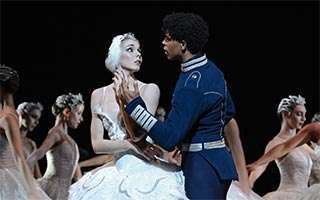 Covent Garden was agog for The Royal Ballet debut of Russian star Natalia Osipova, late of the Bolshoi Ballet and now ensconced with her partner, Ivan Vasiliev, at St Petersburg’s Mikhailovsky company and American Ballet Theatre. Brought in to replace Tamara Rojo, recently departed to be Director of English National Ballet, and to offer Carlos Acosta a partner of world-standing, she caused a stampede at the box-office when news of her engagement for three performances broke. Having guest artists perform does a company the power of good, allowing the dancers to peer out from their cocooned world to see what causes all the fuss elsewhere and to appreciate and learn from different approaches.

Would that the vehicle had been other than The Royal Ballet’s current production of Swan Lake, second-to-none in terms of its choreographic text, but burdened by the now deeply dated costumes and, especially, sets from Yolanda Sonnabend’s 1985 designs. It looks like an explosion in a haberdashery, so many baubles and bangles, ribbons and trinkets, so much extraneous flummery that it distracts immeasurably from the dance. Nowhere is this more apparent than in the over-busy Act One, which bustles and teems like last-minute Christmas shopping in GUM. Dowell favours piling on detail, but what was once subtle has now become coarse, the acting broad as a battleship, the gags so obvious that you see them coming over the ridge. It all needs to be cleared out, like a forgotten attic – the cadets put on a charge, the extras told to stop trying to ‘act’ and the drunken tutor put up against the wall and swiftly dispatched. The only jewel in this tawdry, overblown setting is the pas de trois, a lustrous example of Petipa’s choreography. Alas, at this performance, its sparkling multi-facetted nature was dulled by deadening tempos and performances that contrived to be both over-careful and arch. Surely it is not too much to ask that all dancers in this company can execute entrechats to ballet school standard at least? 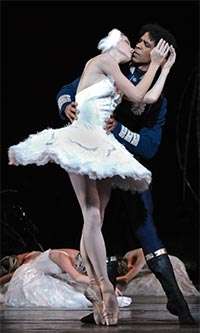 Shining through it all was Carlos Acosta’s aristocratic reading of Siegfried, a real prince, for whom noblesse oblige comes as second nature. He was gracious in Act One, partnered superbly throughout the evening and came into his own in the final two acts. As he has aged, he has acquired greater simplicity in his dancing, distilling his technique so that it now runs pure and clear, free of the temptations to embellish that afflict the young. Osipova, a whirlwind dancer, has plenty of technique to go round, so Acosta’s wise decision as a mature performer not to try to keep up with her made for pleasing contrast, not least in the Act Three ‘Black Swan’ pas de deux where her fireworks were offset by his purity of line and execution, a model delivery of the Prince’s solo, everything placed just so, every landing in fifth position, the line impeccable. Osipova crackled in this act – she is natural virtuoso – and she displayed the insouciant bravura (and brashness) of her original company, the Bolshoi. It sat sometimes uneasily on British eyes, used to something altogether more demure, but it was, nonetheless, hugely exciting. Where opinions can divide is on her interpretation of Odette in the ‘white’ Acts Two and Four. Her Odette is very much an avian, but probably a smaller, quicker bird than a swan. Her performance contained many innovative touches, and her growing love for Siegfried was tellingly conveyed, but at times there was simply ‘too much’, too many, deviations from the purity that this role ultimately requires. Her mime – so important to us in the UK – was smudged, clearly she was unused to delivering it. It may all have been nerves, because she was far calmer and more focussed in Act Four, and her resolve to die was heart-rending. In short, a fine dancer, still exploring the part, but whose appearance with the company is, whatever quibbles one might have, most welcome.

The Act Three Ball is a scenic disaster, a Chocolate Factory visualisation which is now simply ugly in its concept, but contained some spirited national dances which can drag horrifically. Paul Kay impressed greatly as a compact Neapolitan, shaping Ashton’s quicksilver choreography with evident care, and Ricardo Cervera leading the Czárdás was as farouchely Hungarian as they come. Elsewhere, the corps were pleasingly well-drilled as the swans, and both Helen Crawford and Claire Calvert were notable for their finely-judged ‘big’ swans, their duet in Act II quite superb.

Musically, it was a ballet of two halves. Boris Gruzin had not, it seemed, quite come round from his afternoon nap in Acts I and II, tempos sleepily sluggish and drawn-out, fatally robbing the dances of their impetus (the Act One pas de trois was painfully leaden, poor dancing made all the poorer), but had clearly had his coffee and a breath of fresh air for Acts Three and Four, which were altogether sprightlier and drove the drama and the dance on. The Orchestra was encouraged by him at times to ‘blare’ à la russe somewhat, but they played with welcome finesse, not least Concert Master Vasko Vasiliev, whose Act Two pas de deux violin solo was truly exquisite.