Tchaikovsky
The Nutcracker, Op.71 – Ballet in two acts to choreography by Peter Wright after Lev Ivanov, based on an original scenario by Marius Petipa after E. T. A. Hoffmann’s Nussknacker und Mausekönig

Artists of the Royal Ballet

The Orchestra of the Royal Opera House
Barry Wordsworth

The Royal Ballet’s Nutcracker is like Christmas pudding – a tradition, enjoyed it when one has it, but one does not want it all the time. This present production dates from the mid-1980s, but wears its age well, such is the intelligence and internal logic of PeterWright’s concept. It is ultra-traditional, satisfying, and progresses as a stately pace (especially so with Barry Wordsworth’s leisurely tempi, nowhere less pulse-quickening than in the leaden overture). It is sumptuously costumed, lavishly set and contains a truly wonderful growing of the Christmas tree to gargantuan proportions. But, like good-old Christmas pudding, there is a tendency to stodginess and to sit heavily on the stomach, a tendency which can only be counteracted by superlative and idiomatic dancing. In this performance, the general standard of dancing was good, but not great, with several of the minor solos quite seriously under-cast and given to dancers neither temperamentally nor technically suited to them. 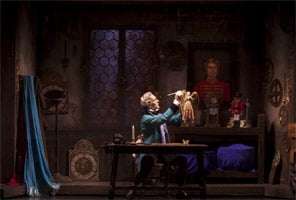 There is much to praise, not least in the detail of the party at the Stahlbaums’ – a scene which gets some children and adults fidgeting in their seats because of its lack of ‘proper dancing’, but which is a delightful evocation of the Christmases that perhaps never were, the ideal of family and children together for the festive season. Wright’s production here is packed with clever and interesting detail, affording the performers a chance to flesh out even the smallest of roles. Mrs Stahlbaum’s clearly frosty relationship with one of the visiting maiden aunts and the nascent attraction between the nearly pubescent Clara and her partner is lovely, full of shy yet curious glances. This the company does well, and, the increasingly embarrassing ‘grandfather section’ apart, with subtlety. Of the dolls brought to life for the guests’ entertainment, Sabina Westcombe as Columbine was the only one to strike the right note both interpretatively and in terms of her dancing – precise and characterful. Christopher Saunders’s warm Drosselmeyer was likeable and he handled his maître d-ing of the second act divertissements with avuncular efficiency.

The Tin Soldiers’ fight with the mice hoard of scurrying and strutting Royal Ballet School children is heavy-handed in its treatment, and much relief comes when the battle is over and some proper dancing emerges. Wright has over the years beefed up the roles of both Clara and The Nutcracker, giving them an impressive and tricky pas de deux after Clara has broken the spell on the imprisoned doll, releasing Drosselmeyer’s nephew. Here, as throughout, both Loots and Cervera were superb. Loots is an experienced dancer who manages to convince as a girl but also succeeds in bringing many layers to what can be a bland character – her Clara has mettle and she is, as already mentioned, on the cusp of puberty, with all that will bring. Cervera is one of the company’s unsung heroes, a highly musical dancer with fine technique and quicksilver delivery. He is lively, reacting fully in character and etching the lines of the choreography with both finesse and aplomb. 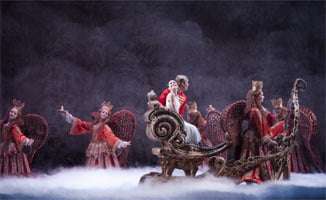 Even though the Act One Snowflakes displayed admirable cohesion and style, few of the dancers in named parts stood out, preferring a one-size-fits-all approach to their classical choreography. The character dances came and went with little effect, so it was with huge relief and great delight that Grand pas de deux followed. Not only did the somnolent orchestra seem to dust off their instruments and engage with Tchaikovsky’s lush, melancholic music for this duet, but the treatment of the dancers gave one of the most successful renditions of this choreography to be seen for many a year. Federico Bonelli was every inch the Prince, executing his steps with a cool classicism even if it seemed that he is not yet entirely rid of the effects of his recent injuries. His partnering was exemplary and showed Laura Morera’s lustrous Sugar Plum Fairy to near perfection. The high point was the entrée during which both dancers performed in symbiosis and Morera made total sense of the movement, drawing one arc over the whole section, pin sharp with her legs and feet, warm and generous in her upper body, smile radiant. This was dancing of the highest calibre from an artist who, like Cervera, has not always received the attention she deserves – she is a Principal but is yet to tackle the mainstays of a repertoire that should be hers: Aurora, Odette-Odile, Juliet and the like. Her Sugar Plum shows her deep understanding of the classical idiom as well as the precise requirements of Ivanov’s inventiveness. This was fine dancing indeed and, alongside Bonelli, Loots and Cervera, Morera showed how stylish and impressive The Royal Ballet can be. It was amongst the rest that, above Tchaikovsky’s familiar but brilliant score, could be heard the faintest of alarm bells ringing.