Tchaikovsky
The Sleeping Beauty, Op.66 – Ballet in a prologue and three acts to an original scenario by Ivan Vsevolozhsky with original choreography by Marius Petipa, with additional choreography by Frederick Ashton, Anthony Dowell & Christopher Wheeldon 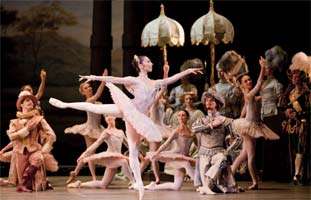 The health of The Royal Ballet can be gauged by watching a performance of its signature work The Sleeping Beauty. So essential is it to the company, so integral to its identity, so illustrative of its strengths and weaknesses at any given time, that it is, in essence, the ultimate test. On the evidence of the first (matinee) performance this season, the patient remains alive and in generally good health but with some worrying symptoms which, if left untreated, could develop into something more serious. The good news is that, thanks to the generosity of Lord and Lady Sainsbury, many of Peter Farmer’s pallid and unimpressive costumes have been replaced with bolder, more ‘Messel’-like creations. The King, the Queen and their court benefit most – we now have a clearly seventeenth century setting with acres of velvet, brocade and ruffs; it makes much more sense and fits with Messel’s extravagant backcloths of their fantasy baroque palace. In later acts, more of Farmer’s costumes are kept but to no harmful effect. The only jarring note is struck by the Lilac Fairy’s frankly hideous bodice and tutu – inexplicably magenta. Not good. The production looks good overall, lighting is effective and the complexities of the panorama and the entrance into the slumbering palace smoothly engineered. 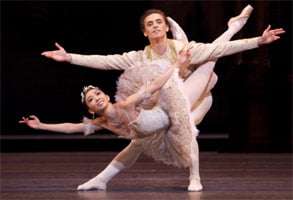 The problems started to arise when attention was drawn to the pit – at times the orchestra, under Boris Gruzin’s sporadically wayward baton sounded glorious, with warm Tchaikovskian strings and delicate woodwind, and at others frankly unimpressive, the brass, once again, either producing sound of beauty or not. At one moment in the Act Two Vision scene the orchestra split into two, each going its own way, and neither being that of the conductor. Matters improved in the final act which enjoyed suitable swell in the music. 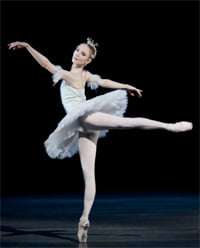 And so to the dancing. Sarah Lamb was not scheduled to dance at this performance, but was replacing an injured Akane Takada. Lamb is a cool dancer, one who has not ‘warmed up’ since her arrival from Boston Ballet a few seasons ago. Her Aurora is efficient but uncommunicative – the wonder of the sixteen year-old princess at her birthday celebrations, the surprise at being awoken by the Prince, the womanly grandeur of the last act, were all missing from her portrayal. In the Rose Adagio she barely looked at her four suitors, and when she did it felt it was because that was what she had been told to do in rehearsal. She is remarkably inexpressive with her arms and décolletage, so much so that the wondrous gestures of her Act Three solo – so beautiful when danced by Fonteyn – went for nothing at all. She dances well, has a strong technique and executed her steps with efficiency and diligence, but at no time did one feel that her performance came in any way from within. 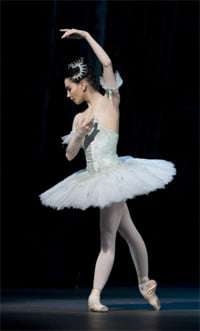 As Florimund, Steven McRae was quite different. An instinctive actor, he laced his portrayal of the melancholy prince with so many felicitous touches that every moment was a pleasure to watch – he resembles Johan Kobborg in this respect. His dancing was exemplary, his naturally ebullient technique suitably restrained and intensely classical – he delivered Frederick Ashton’s melting Act Two solo with great élan, even though there is even more to be found in it. His Act Three Grand Pas solo was superbly danced; it was a pity then that instead of sticking to the choreography as set in the coda, he chose to execute admittedly impressive yet flamboyant, and ultimately vulgar, Soviet-style ‘barrel jumps’; a small error of judgment which did nothing to mar his superb interpretation of what can be a very bland part.

Elsewhere matters were uneven Kristen McNally’s spitfire Carabosse was likable, but Gary Avis over-egged his King Florestan somewhat – this evocation of Louis XIV must be restrained and dignified at all times. Alastair Marriott’s Cattalabutte is an aberration: like a balletic Charles Hawtrey he minces, pouts, primps and camps around like a drag queen in some bus-and-truck production of La Cage aux Folles. He must be stopped – oh for the dignity of Leslie Edwards. Indeed, the vulgarisation of Florestan XXIV’s court is something to be noted and, please God, reversed.

There was a very good Bluebird pas de deux from Hikaru Kobayashi and Kenta Kura, admirably in unison, technically in command, and a delicious Puss in Boots duo from Paul Kay and Iohna Loots. The Florestan pas de trois went extremely well with all dancers showing real panache, although more Ashtonian style from Dawid Trzensimiech was needed. Emma Maguire was superb, as she had been in the Prologue as what used to be called Fairy Temperament (and is here Fairy of the Golden Vine). The other fairies were distinctly lacklustre (not helped by Gruzin), with poor or dutiful execution of the choreography – theirs should be a sparkling series of solos. There was clearly a difference of opinion in most ensemble dancing over the appropriate musicality, leading to some unwarranted raggedness. The restoration of the costumes for the four princely suitors is welcome and Thomas Whitehead’s farouche Russian prince drew one’s eye constantly – all sables and Slavic attitude.

The rethink of this production has not, however, extended to ridding it of one element and restoring another: Christopher Wheeldon’s Garland Dance remains in all its tediousness, an under-baked confection which gives the corps de ballet next to nothing to do and is in no way a visualisation of the glorious score. Oh to see Ashton’s version again. I had hoped that with shorter-than-usual intervals time had been made to restore the Hunting Scene Farandole without which it feels truncated and perfunctory. No such luck – as soon as they all arrive, they trot off again after a spot of blind man’s buff.

It is certain that the company will settle into the ballet – first nights often give the feeling of a dress rehearsal – and that more senior casts will give a more even performance. One hopes so – if The Royal Ballet cannot get The Sleeping Beauty absolutely right, then something is wrong indeed.