Les Patineurs – ballet in one Act to choreography by Frederick Ashton

The Concert – ballet in one Act to choreography by Jerome Robbins 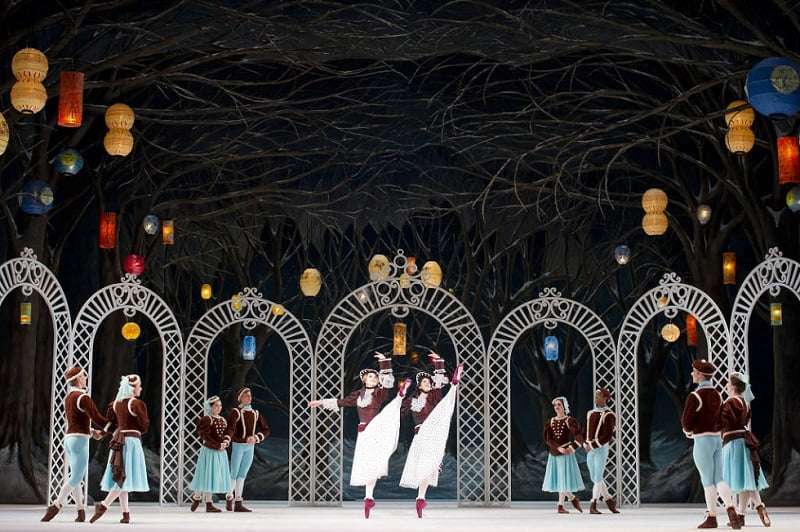 God is in His heaven and all is well in the world when Frederick Ashton’s Les Patineurs is on the stage of the Royal Opera House, all the more so when performed with such style and verve as at the opening performance of The Royal Ballet’s latest mixed bill. It is the perfect opening to an evening, a charming evocation of a Victorian skating party in the still-striking designs by William Chappell, all naked tree branches festooned with Chinese lanterns and the dancers in fur-trimmed velvet jerkins, hats and boots. It is almost unbelievable that this perfect little ballet dates back to 1937 and features no fewer than seven major roles which still challenge the far stronger and technically accomplished dancers of today. This was a superb performance, lovingly taught and coached by Christopher Carr, which saw the brightest and liveliest of the company’s artists sail assuredly through the work and, crucially, do so in the correct style. A crisp ensemble of corps de ballet skaters was augmented by the characterful ‘Red Girls’ pairing of Beatriz Stix-Brunell and Mayara Magri who brought suitably high dudgeon to their reaction to their own fall on the ice. 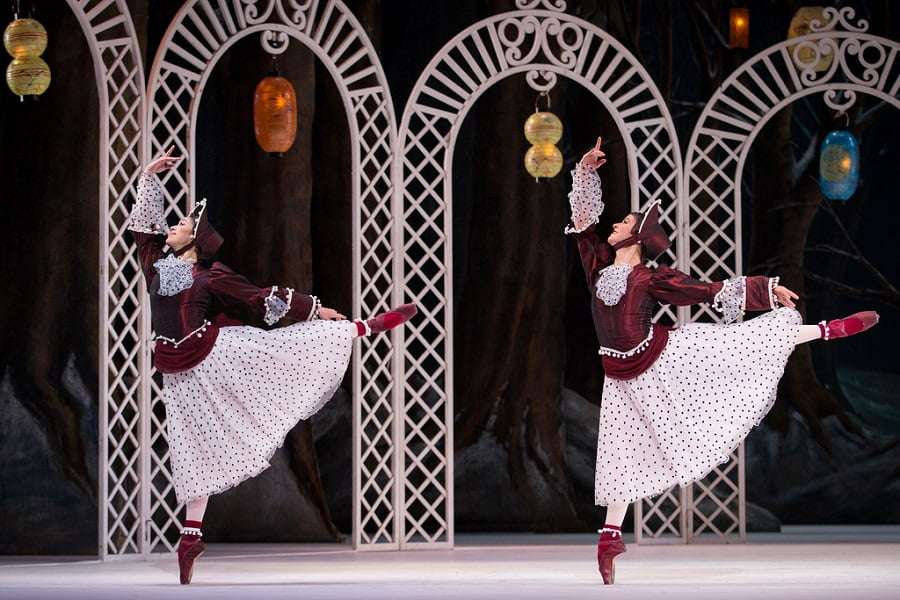 Ashton’s ability to create the illusion of skating is remarkable for them and throughout the ballet, not least in the melting ‘White’ duet, a section for two lovers who glide elegantly, she tracing seemingly never-ending circles in the arms of her elegant partner – Fumi Kaneko was grace personified alongside an impossibly elegant William Bracewell. The two Blue Girls saw Yuhui Choe and Anna Rose O’Sullivan catch the perky insouciance of these two expert skaters who demonstrate their virtuosity in spins and turns of dizzying speed – Choe launched into her fouetté turns with unruffled confidence while O’Sullivan impressed with her whiplash speed and subsequent dead stops into perfect balances. As the cheeky show-off Blue Boy Marcelino Sambé brought immense charm to his performance, clearly enjoying the whole experience and relishing the technical demands with the highest of jumps, the quickest of turns and the neatest of footwork. His centre-stage spins as the curtain descended were of frightening speed: he is a worthy successor to all the wonderful interpreters if the role from decades past.

Barry Wordsworth coaxed full sound from the orchestra, even if his tempos were at times a little over-indulgent and the trumpet was having a distinctly off night.

It is good to see again Winter Dreams, Kenneth MacMillan’s telling of Chekhov’s Three Sisters, even if it sits oddly in this festive triple bill – but then the construction of mixed programmes by The Royal Ballet continues to be a seemingly random process, placing often utterly unrelated works together. 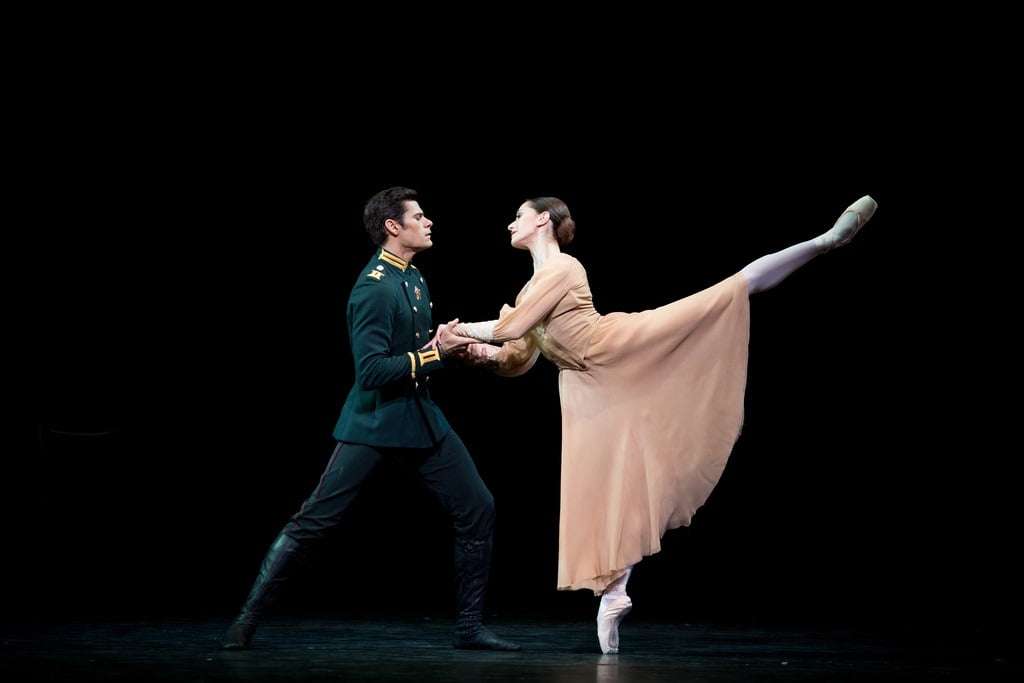 Winter Dreams, for all its good points, is also far too long – at 55 minutes, its pace is slow and it is crammed with too many characters who each get their ‘dance’. It is strongest when focussing on the three sisters themselves and certainly ends powerfully after some lengthy meanderings. A strong trio comprising Marinela Nuñez (Masha), Itziar Mendizabal (Olga) and Yasmine Naghdi (Irina) brought tangible individuality to their respective performances, Nuñez looking impossibly elegant which made her final devastation at the departure of her lover Colonel Vershinin all the more powerful; Naghdi danced superbly, although lacked a degree if projection of her character beyond the footlights. As the two officers who fight over her, all praise, Nicol Edmonds bringing out the brutality of Solyony in contrast to the shy meekness of William Bracewell’s Tusenbach – the latter’s death in the duel between them is heart-rending. Their performances are fully in the proud lineage of the company’s best actor-dancers.

Gary Avis gave a multi-layered portrayal as Masha’s cuckolded husband, his lamentable attempts to communicate with his wife painful to watch. All praise to the Valentino Zucchetti as the three sisters’ brother Andrey – his footwork was feather-light in his small solo – and Lara Turk, his bossy wife Natasha. Alas, this revival comes late for Thiago Soares as Colonel Vershinin, so while he partnered Nuñez well, the strains of the physicality needed for their ‘Farewell’ pas de deux were all too apparent (the role was created by Irek Mukhamedov in his pomp, after all).

Jerome Robbins’s The Concert stands as one of the most genuinely funny ballets in the repertoire. From 1956, it has been altered over the years, but still retains the zaniness of that era’s comic style, a healthy strain of surrealism running through it. This revival was good but not yet great; it is probably true that however much rehearsal goes in to comedy, it is only by hearing where the laughs come and as a reaction to what that the artists can fine-tune their performances; there were some instances of dancers trying perhaps a little too hard, and while some elements were as hilarious as ever, some also fell a little flat. 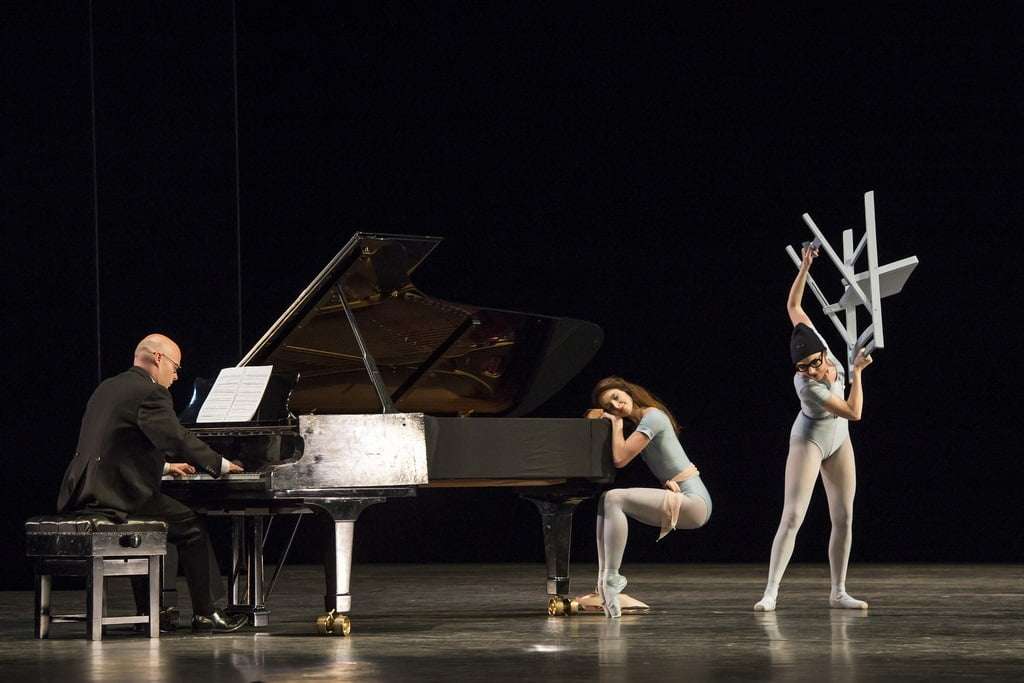 Pianist Robert Clark had a ball as the weirdo pianist whose playing of Chopin engenders the flights of balletic fantasy which ensue, and Lauren Cuthbertson was deliciously ditsy as the extravagantly-hatted ‘lead’, expansive of movement and gesture, launching herself at a hapless and shy Tristan Dyer who finally curtails her perpetuum mobile with a thump on her head with a rubber cosh. Laura Morera made as much as anyone could of the severe and ultimately vengeful Wife and kept firmly under her thumb Nehemiah Kish’s underpowered Husband. The ‘Mistake’ Waltz remains perhaps the jewel of The Concert’s wonky crown and was danced to perfection by a deadpan sextet who never quite manage to dance in unison, although their entries and exits which sees them carried hither and thither in outrageous poses by capering porters, runs it a close second.

Robbins constructed The Concert with care, so, amid all the lunacy, he inserted a poetic interlude of dancers simply walking across and around the stage with opened umbrellas to the ‘Raindrop’ prelude. Even if on opening night it was not quite as good as this piece can be, it was a perfect close to a mixed evening from three undisputed masters of twentieth century ballet – Ashton, MacMillan and Robbins were and are the real thing; something The Royal Ballet should always remember.