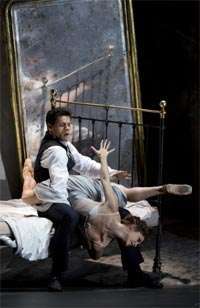 Not a great evening, and, indeed, a very long way from a good one – The Royal Ballet’s new Triple Bill at Covent Garden makes for an ultimately depressing time. In terms of scheduling, it is so obvious in its breathless desire to grab a ‘new audience’ for the gold and plush of the Royal Opera House: three works by young (-ish) choreographers, one by the once-Great White Hope of British Ballet, one by the present GWH and one whose lack of ballet credentials are more than outweighed by the received wisdom of his genius and his oneness with the zeitgeist. First night was peopled by the young, the weird and the wonderful, more peroxide and piercings than the usual Botox and face-lifts, but given that the Company has corralled these works together like three slightly nervy sheep, will any of the ‘new’ audience bother to return to see The Royal Ballet in its more usual repertoire? I think not. 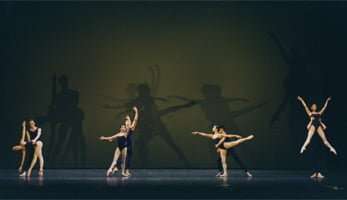 Christopher Wheeldon’s Polyphonia is, at least, the real McCoy, and when it was acquired by the company in 2003 (it was created for New York City Ballet in 2001) was rightly hailed as a modern masterpiece and a clear indication of where classically-based dance could go. Intelligently and at times brilliantly set to a selection of Ligeti’s piano works, it deftly creates its own world (as all great ballets do), here quirky and at times mysterious cool, gymnastic lyricism. Costumes are a fetching mauve and purely simple, lighting deft but subtle – nothing detracts from the centrality of the dance. And what dance! In this revival, Wheeldon has chosen a mainly very young cast of company hopefuls who seize the opportunity with relish to take centre stage. Universally, the dancers are stylish and technically impressive; at their centre the extraordinary Leanne Benjamin. She is a phenomenon, still first choice for young choreographers who recognise her special gifts, not least of which is her affinity with new work. Her central pas de deux with Nehemiah Kish shimmered with perfect control. Elsewhere, the youngsters danced with élan: Beatriz Stix-Brunell was notable for her long-limbed feminine quality (reminding of the young Bryony Brind), Itziar Mendizabal impressed with her sassiness in duet with Dawid Trzensimiech – he all blond, boyish charm. He also delivered a quick-fire duet with the highly musical Alexander Campbell, whose female partner was the pliant and ever-in-control Yuhui Choe. The work itself comprises ten sections and seems to spring spontaneously from Ligeti’s music; Balanchine’s influence is clear to see, but Wheeldon fuses that with his own, distinctive voice to make a work of startling individuality. 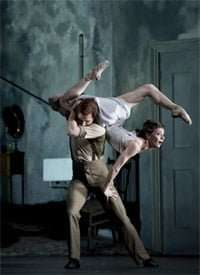 Liam Scarlett garnered laurels of praise for his first Main Stage work last year Asphodel Meadows, a delightful abstract work, entirely in the English ballet tradition, yet like Wheeldon in 2001, taking the idiom on into the twenty-first century. Here he explores another aspect of his artistic inheritance, but, it is sad to relate, with considerably less success. Sweet Violets is Kenneth MacMillan territory – a period costumed exploration of the human psyche, sexuality and murder. John MacFarlane’s designs lower in Edwardian grubbiness and his period costumes cannot be faulted, but Scarlett’s exploration of the painter Walter Sickert’s dark side through the story of the Camden Hill Murder, Jack the Ripper and the episode of Prince ‘Eddy’ makes for a mighty confusing time for the audience who cannot, by any stretch of the imagination, know that Christopher Saunders who at one instance strides into Sickert’s studio like Germont père is in fact Lord Salisbury the Prime Minister, and that Federico Bonelli is in fact portraying Queen Victoria’s grandson Prince ‘Eddy’. 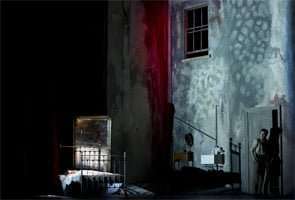 Sweet Violets is far too long at 48 minutes, and it was a mistake to select Rachmaninov’s Trio élégiaque No.2, which, however admirably played, was simply not enough to fill the vast expanse of the Royal Opera House. Scarlett had the cream of The Royal Ballet at his disposal, but with a deeply confusing narrative, many great artists were cruelly underused – Johan Kobborg as Sickert did practically nothing except look uncomfortable and fidget a lot. Certain episodes were superfluous – the visual coup de theatre of having one wall of the set rise like a curtain to reveal an opera box, thereby taking us back stage, was masterly, but the scene itself with prancing dancing girls took us and the storyline nowhere. David Finn’s lighting is masterly, creating atmosphere and plenty of dark corners, but alas makes it often impossible to see clearly who was dancing or indeed what was happening. 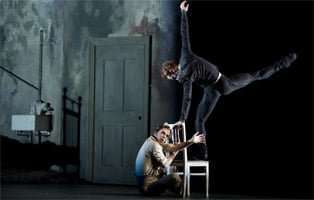 Within all this regrettable confusion there are episodes of interest which reveal Scarlett’s choreographic voice and talent: the pas de deux for Leanne Cope’s doomed prostitute Emily Dimmick and Thiago Soares’s sadistic Robert Wood which opens the ballet is startling in its ferocity and blatant sexuality, clearly heavily indebted to the pas de deux of MacMillan’s Mayerling, but taking the genre on. Laura Morera as Annie E. Crook (how on earth is anyone expected to know that her character is locked up in a mental asylum as punishment for witnessing the clandestine marriage of Prince ‘Eddy’ and her friend Mary-Jane Kelly?) is quite superb, and her choreographic ravings on and around a bed were painful to watch, as was her subsequent pas de deux with Sickert who comes to visit her. Tamara Rojo was a magnificently sluttish Marie, an artist’s model, making much of her low-class provocativeness. I was, I must confess, utterly stumped as to what or who Steven McRae was supposed to be –made up like Robert Helpmann and clad in a ballet all-in-one of caked blood colour, he stalked the stage as a sort of incubus – the murderous side of Sickert? His alter ego? The personification of evil? All I know is that he is billed as … Jack.

Scarlett’s talent is plain to see, but, alas, in Sweet Violets, he has shown that narrative coherence and clarity as yet elude him. With experience and a good dramaturg, that should come in good time. 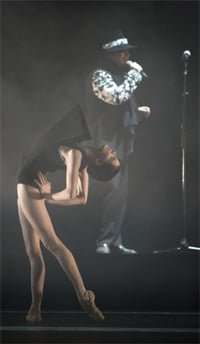 From the disappointing to the penny dreadful… The listing of “New McGregor Work” (note “work” and not “ballet”) does not quicken the pulse; his choreographic blandishments since his one undoubted Covent Garden hit Chroma have passed by – his most recent work Live Fire Exercise was a drab bore. I loathed Carbon Life, loathed it for its self-proclaiming, self-aggrandising anti-ballet vulgarity, loathed it for its incoherence and for its self-referencing choreographic onanism. Ideas come and go with no regard to cohesion or logic – the opening scene of dancers appearing in ever-changing pools of light behind a gauze which make their bodies shimmer like glow worms was interesting (the lighting by Lucy Carter is brilliant throughout – she is mightily talented), but then the front scrim lifts never to return and we encounter a bare stage with a motley crew of musicians, laughably kitted out by Gareth Pugh in a variety of outfits, not least Boy George who appeared towards the end looking more like George Melly. He does, at least, have a voice, and his contributions were welcome after the ranting banshee that is Hero Fisher and the inchoate rat-a-tat-tat of Black Cobain’s rapping. 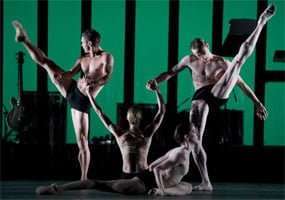 To Mark Ronson and Andrew Wyatt’s nine numbers, some orchestrated by Rufus Wainwright (gosh, let’s hug each other in the aching now-ness of it all), McGregor throws in everything, but ultimately, despite it being a ballet presented by The Royal Ballet, the dancing never assumes primacy over the costumes, lighting and music. So Boy George’s shimmying during his number drew the eye away from the dancers, as did Fisher prowling the stage during a duet, or Pugh’s Sauron-like headpieces and greaves in the final section (elsewhere the dancers wore the usual McGregor trunks either in flesh colour or black). The whole experience felt like like a bad acid trip in an early eighties night-club; McGregor wants to be cutting edge, but Michael Clark, Leigh Bowery and all that crew (both still alive and no longer with us) did it all first, and did it all a generation ago.

McGregor’s movement vocabulary, the pelvis-splitting, the twitching and the lightning speed has been toned down which often reduced it to choreographic mumbling, a shambling shuffle through the numbers, reliant on the extreme pliancy of the dancers’ spines and not much else. What promises to be interesting as the dancers start the second number lined up in a ‘V’ shape and moving in unison through a series of ‘ballet’ poses and from which singles and pairs split away, soon gives way to a series of predictable duets. All of his favourite dancers were there (so many in the company never get a look-in, but perhaps in the long run they are the lucky ones) – Watson, Cuthbertson, the ever-impressive Paul Kay, Eric Underwood, Sarah Lamb and Steven McRae. Most irritating above all was that McGregor’s concept shows no interest in the dancers as individuals (at one moment two male dancers partnered Marianela Nuñez with their heads entirely covered by hole-less balaclavas) – they are bodies stripped of identity to be set into motion by his guiding hand. All the visual and aural flummery and trickery is intensely depressing for the future of this company; just as with Damian Hirst, who takes great pride in being an artist who knows nothing about art, so McGregor is a ballet choreographer for whom ballet as it has progressed and developed over the decades and the centuries holds little to no interest. Carbon Life is the egg of a choreographic cuckoo laid in The Royal Ballet’s nest.