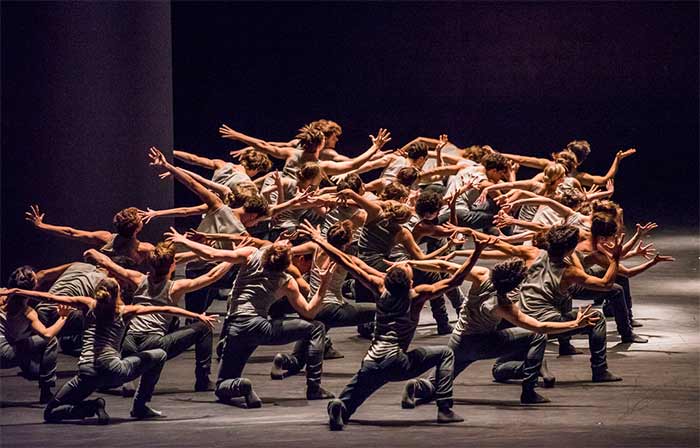 Dance works of the quality of Flight Pattern are created sometimes only once in a generation, and it is true that The Royal Ballet has been waiting for a genuine success in its commissioning policy for many, many years. Crystal Pite is something of the choreographer of the moment, and with good reason: her work over the past few years with Kidd Pivot, her own company, and others has revealed uncommon ability in her deployment of her performers and an equally rare humanity in which speaks directly to the soul.

And so it is with Flight Pattern, her reaction to the present refugee crisis, but, as one would expect, nothing so obvious as ‘a ballet about refugees’. It is the second such work this season, following the November première of Wayne McGregor’s half-baked Multiverse, which was a disappointment. Pite evokes a distilled world of the displaced, so, while some might see the exodus from the Middle East, others will see the march to the gulags of Soviet Russia, to the camps of Nazi Germany or any number of examples of the mass movement of humanity, and humanity is at the very heart of this work. 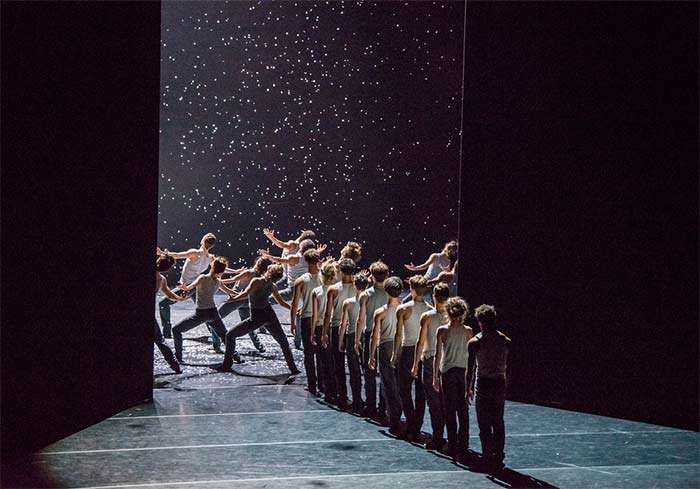 What is so brilliant in this intense, sparse yet beautiful creation is that it can and does say something about the plight of others. That is not ballet’s strength – we usually witness the distress and ecstasy of individuals, love triumphant or love thwarted, but dance is not the natural means of expression for something more general, more abstract. There is not, or perhaps until now has not been, the equivalent of the Chorus of the Hebrew Slaves in Nabucco or the exiles’ chorus in Macbeth, so Pite’s achievement is all the greater as she brings the same sense of pain, loss, yearning, hope in her new work.

Setting 36 dancers, she is remarkable in the precision of her use of the full stage and her ability to bring out individuals from the ensemble for small, instantly understandable vignettes, only for them to return to the mass. Kristen McNally and Marcelino Sambé emerge as such individuals, caught up in their un-named plight, he raging at one point in helplessness, she rocking back and forth with a coat in her arms – we see a baby, which is subsequently, devastatingly is lost as she unravels the material for there to be nothing within. It is in the economy of means that Pite’s genius lies, whether choreographing for one or for all. 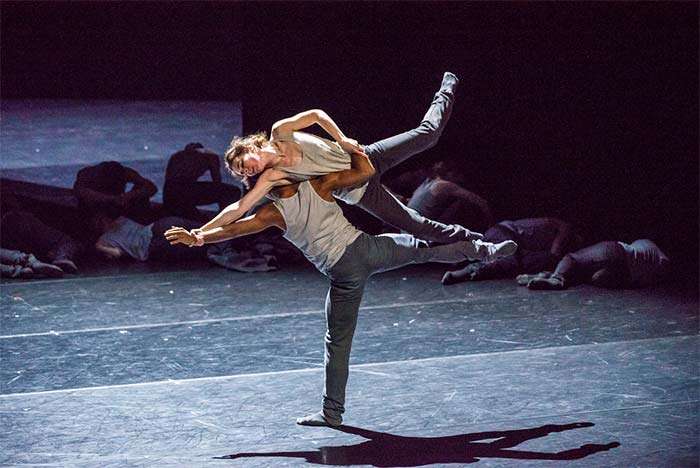 Her movement vocabulary, thrillingly counterpointed with still pose, is totally coherent and apt within the work itself and, as such, makes it the third such ballet in the company’s wide repertoire. Bronislava Nijinska’s Les Noces (1923) and Kenneth MacMillan’s The Rite of Spring (1962) and now Crystal Pite’s Flight Pattern are not ‘classical’ ballets, their movements often as un-balletic as one could imagine, but such is their artistic integrity, emotional power and internal coherence that they are jewels of the performing canon, bringing to performers and audiences alike a wholly different experience. They are, all three, ensemble works above all and derive their force from the rare sense of all the artists sharing absolutely a common goal. This work opens with a great, shifting phalanx of dancers, all clad in sombre grey overcoats, a pulsating mass of humanity. It is a striking beginning, and throughout the work’s 30 minutes there is no let-up in focus or intensity, as the dancers evoke migration and rest, remembrance and imagination, all in a state of near limbo. A spartan setting of a plain wall which splits open, is complemented by the uniformly plain costumes in subtle variations of grey.

This is a cold, monochrome world indeed, lit with deft precision; at one moment the cast is bathed in a golden light in a single episode of hope, their movements briefly more joyous. The contrast with the previous drabness is telling, as, indeed, are the final minutes in which snow begins to fall. With such plainness around, the sight of falling snow is intensely beautiful, but so clear is Pite’s narrative that we can almost feel the temperature drop for the poor people fleeing un-named horror. Her choice of Górecki’s Third Symphony is inspired, its soulful inner darkness perfect for Pite’s purpose and its absence of percussive rhythm allowing her to find her own choreographic pulse. It starts with the orchestra in darkness, the double basses spotlit, and as the canon develops, each section is illuminated – deft touch indeed. All praise to Francesca Chiejina, a Jette Young Artist, who took the soprano part with assurance and firm tone. In all aspects, Flight Pattern is artistry of the highest order. 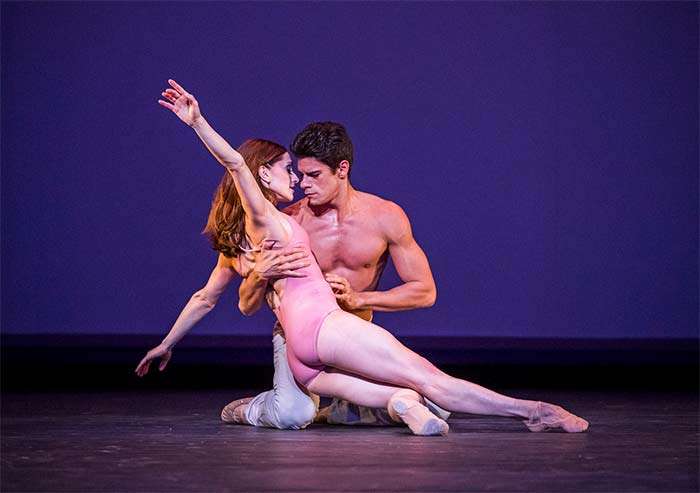 Intensely balletic, Christopher Wheeldon’s After the Rain precedes Flight Pattern which, unusually for a new work yet rightly for such a blistering experience, closes the programme. It is richly satisfying as a work of pure dance, the opening section for three couples a slick yet intelligent reaction to the stops and starts of Arvo Pärt’s Tabula Rasa; movement is healthily athletic, owing not a little to George Balanchine, and here performed with vim. The second section is for one couple, now changed from their grey-blue costumes to something altogether less severe – the woman in pink leotard, the man bare-chested in soft trousers. Conceived by Wheeldon as a ‘love letter’ to two star dancers of New York City Ballet, Wendy Wheelan and Jack Soto, it is a deeply intimate duet, mesmeric even, given its musical accompaniment is the enigmatic Spiegel im Spiegel. Principal Zenaida Yanowsky, now in her last season with the company, dances with the hugely promising young soloist Reece Clarke, an autumn/spring pairing that adds fascinating layers to this pas de deux. She remains an expressive dancer of the first order and he provides a strong counterpoint, bringing a degree of softness to his tall, masculine presence. 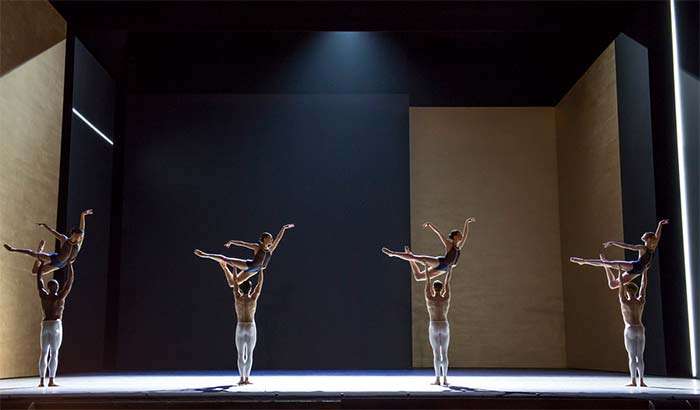 Would that The Royal Ballet had chosen another work to open the programme; David Dawson’s The Human Seasons premièred in 2013, and it was hoped that it would be quietly forgotten about. But no, it has made an unwelcome. It is a third-rate work, unworthy of its place alongside Wheeldon and Pite on this programme, unworthy of a place in the company’s repertoire, period. Dawson has forged a career in continental Europe, and brings all the worst elements of modern ballet to be seen there: a hollow classicism which sets dancers off into a meaningless perpetuum mobile, a penchant for complicated lifts which are almost never worth the effort, and a dull, unfocused musicality.

The Royal Ballet’s dancers perform this vacuous dance-by-the-yard with commendable stoicism, but matters are not helped by evident under-rehearsal and the plain ugliness of some of the moves; In 2013, I commented on Dawson’s unwelcome use of dragging female dancers across the stage on their backs or bellies, and time has not made that element of his choreography any less palatable. Unlike the two other dance-makers in this programme, Dawson is not good at bringing his dancers on or off the stage, so they simply walk on and station themselves, ready to launch into more empty moves, or slope off perhaps a little shame-faced at what they have just been called upon to do. Even artists of the standing of Nuñez, Lamb, Cuthbertson, Muntagirov and Bonelli cannot save this work, nor convince us fully that they believe in it. It is overlong at 35 minutes and not helped by Greg Haines’s forgettable score. With so many truly great ballets lying neglected in The Royal Ballet’s repertoire, there can be simply no excuse for reviving this on.