Afternoon of a Faun – ballet to choreography by Jerome Robbins

Afternoon of a Faun 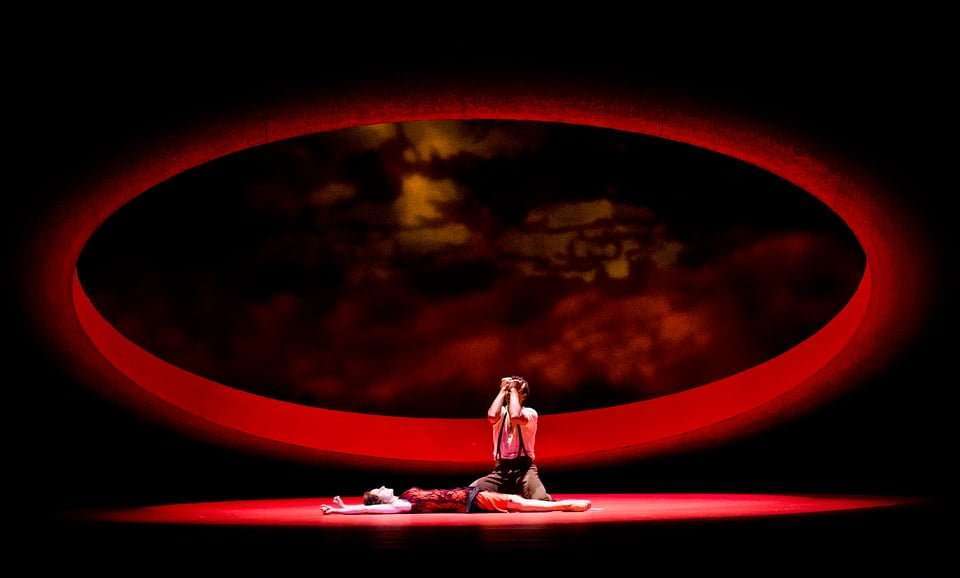 Carmen is a spectacular flop despite very considerable resources being flung at it. The main reason behind this is that Carlos Acosta may be many things – modern icon, ballet superstar and a genuinely nice chap – but a choreographer is not one of them. Of course, his long and varied career has exposed him to much, so he can put steps together, but what is lacking is the spark of choreographic genius which makes movement into dance, and dance with purpose and meaning. There might have been more chance of success if there had been a tight dramaturgy imposed, but it seems as if he was given free rein. One can only assume that The Royal Ballet, notoriously bad at acknowledging the contributions of great dancers from abroad (Mukhamedov, Guillem, Kobborg) wishes to make amends by allowing Acosta whatever he wanted for his Carmen. But here too much freedom is a bad thing; Acosta claims in the programme to have stripped away the peripheral characters, but in reality that means keeping the named friends and bandits but excising only Micaëla, who actually gives texture to Don José’s character both in Mérimée’s book and Bizet’s opera.

There have been numerous dance versions of Carmen, the most successful being perhaps Roland Petit’s, but Acosta’s must come in as one of the longest at 60 minutes. His choreographic palette is simply too limited to sustain such a long time in dance – movement is an unsuccessful hotchpotch of classical, contemporary, modern, vernacular, flamenco and Caribbean, some pas de deux have an ‘after MacMillan’ feel while there is what can be surmised a tavern scene which is for all the world a cruise ship floor show, The Royal Ballet’s thoroughbred dancers gyrating as if they were appearing in some third-rate cabaret number. The sorry dancing is mirrored by Martin Yates’s frightful score which plays fast-and-loose with poor old Bizet, who is not around to defend himself: chopping, blending and blitzing it up with percussion-obsessed scoring (Acosta claims to wish to get away from the Carmen of cliché but we hear more castanet playing in his ballet than in the opera itself) and even interpolating some music from L’Arlésienne. 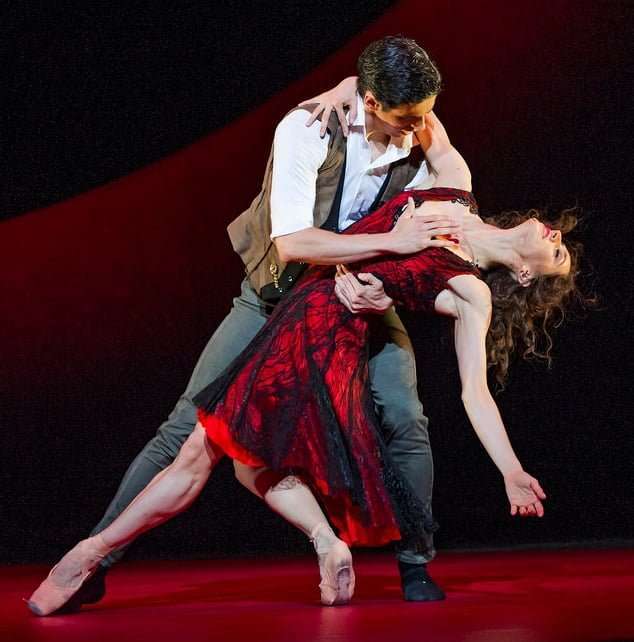 And there is more: flamenco guitarists and bongo-players, and even the Royal Opera House Chorus and poor Fiona Kimm dressed as some Andalusian crone all singing in Spanish (why?) which, for the record, does not scan with Bizet’s music.

Characterisation is pretty thin on the ground: gypsies rhubarb their way round the stage just as ballet gypsies always do (although the women do get to be pushed across the stage on wheeled chairs at one stage, grinning grimly and holding on for dear life), Escamillo primps and preens away (an amusing Federico Bonelli) and Don José (Acosta himself) looks suitably anguished with the requisite open palms and splayed fingers of the universally understood sign-language for despair. Carmen, well, is Carmen: Marianela Nuñez in black bra and a wig which has seen better days, vamps around the stage, wrapping her legs around any passing male, or cruelly pushing Don José away just how her mother taught her any self-respecting gitana should do. But no-one is actually given anything to work with, there is no character development and indeed precious little character to start with. I don’t what poor Matthew Golding has done to deserve his role; as a Principal of the company, he could have expected to get to dance the plums of the repertoire. Here he is the figure of fate, replete with dark make-up and a pair of large plastic bull’s horns on his head. Apart from two brief forays onto the stage surface, he merely appears from time to time silhouetted against a back-drop, striking to look at admittedly, but not perhaps the natural metier of a lead dancer. 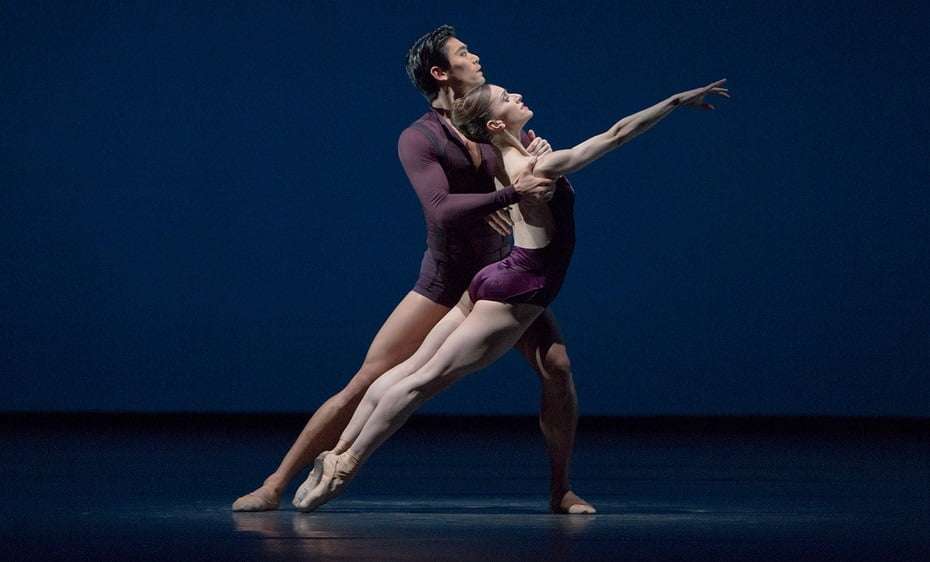 Tim Hatley’s massive red oculus at the back of the stage is impressive, but I could only wonder how much less it would have cost had it not had to be lowered to the horizontal for the closing moments of the work. Carmen served somewhat to take the gilt off the gingerbread of the preceding works in the evening, which had much to enjoy.

Liam Scarlett’s Viscera was initially created for Miami Ballet, and it is clear that the choreographer was experimenting with that company’s more Balanchinean movement quality, and, more precisely, his use of open arms. Set to Lowell Liebermann’s First Piano Concerto, it is a satisfying work, very much in the genre of Kenneth MacMillan’s Concerto, with active allegro outer movements comprising soloists and corps de ballet framing a quiet and contemplative central duet. All praise to the company in this work – they looked fresh, engaged and displayed sound musicality. Laura Morera stood out (as she so often does) with her ability to play with phrasing and her innate feeling for when to freeze a pose and when to run movements together.

The central section was, frankly, odd. With a repertoire second-to-none, and a large company to call upon, the management might have been expected to schedule a middle ballet in contrast to the other two, but rather it chose to do what smaller companies, stretched both financially and for numbers choose to do, namely to programme two pas de deux. 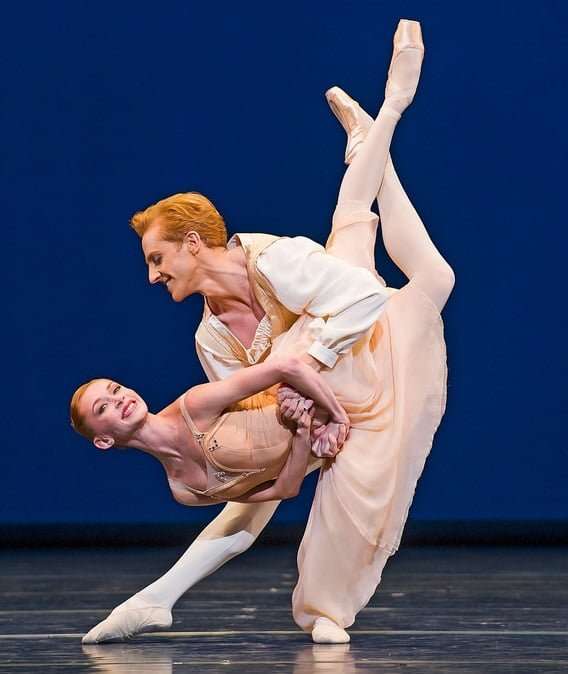 Jerome Robbins’s Afternoon of a Faun was last seen at Covent Garden this summer, but it was most welcome with Vadim Muntagirov and Sarah Lamb performing it, and demonstrated that Robbins could get more characterisation, development and meaning into eleven minutes than Acosta would in sixty. Both have found their way into the work, two dancers meeting in a ballet studio, the conceit being that the audience is the mirror they look into constantly. They are well-matched physically and temperamentally, both cool, Apollonian even, yet with an underlying sexuality which hangs like scent in the air.

Balanchine’s Tschaikovsky Pas de deux is a total contrast – big, bold and virtuosic, although there also has to be insouciant chic. Steven McRae leapt and bounded with grinning efficiency and guest artist (the 90+ Royal Ballet apparently does not have a partner for him), Iana Salenko, was petite and swift, executing her steps rather more clinically than charmingly, although it must be conceded they make a well-matched couple, and Balanchine’s fiendish choreography holds no fears for them. I missed in Salenko an ability to weave movement together into something rather more seamless than her start-stop approach, and they are both a little small-scale for this work in which long-limbed grace is most effective.

A final thought. This Mixed Bill could be term ‘pan-American’ with all four ballets having a distinctly transatlantic flavour: Balanchine and Robbins are cornerstones of the American style of ballet, but Scarlett’s Viscera uses American music, was created on an American company and shows the choreographer taking on board that self-same style. Finally, Acosta brings much of his Cuban aesthetic and sensibilities to Carmen – it sits uneasily on this nation’s flagship ballet company.