Students of The Royal Ballet School 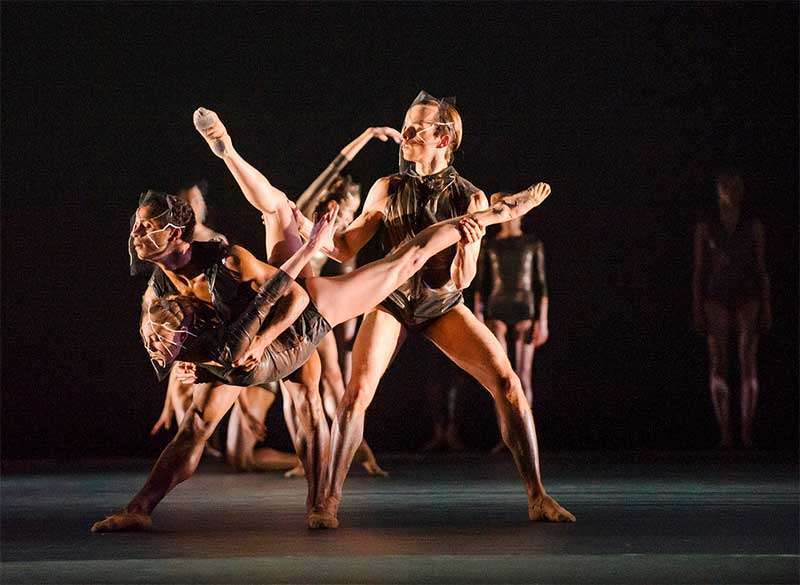 Woolf Works, Wayne McGregor’s new full-length ballet, emerges as a real curate’s egg – neither bad enough to make the doomsayers rub their hands in glee nor good enough to greet it as a gleaming addition to The Royal Ballet’s repertoire.

McGregor is most certainly not faint-hearted, and it is true to say that the Royal Opera House has thrown everything at this project; the production team led out by McGregor as the final curtain extended on and on, reminding one of those ladders that emerge from suitcases, and numerous enough to have just undertaken a major production of ‘The Ring’ cycle. We have a recording of Gillian Andersen, no less, intoning ‘that letter’ before the final section of the ballet based on The Waves, which ends, inevitably, with the author’s death; there is stunning lighting by Lucy Carter whose imagination and virtuosity seem boundless, even Kabuki, a top make-up artist from New York, (not his real name one suspects as he hails from the north of England), and the still-stunning ex-Royal Ballet Principal and assoluta of La Scala Allessandra Ferri. Such collaborators do not come cheap. Add to the mix the pick of The Royal Ballet who, if it can leave something to be desired in Classical works and repertoire staples, can rarely if ever be bettered in contemporary work. 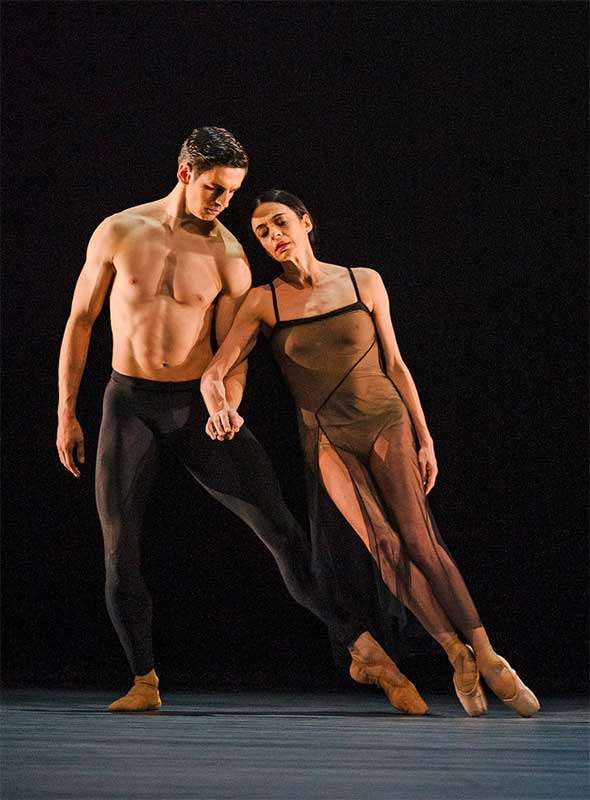 McGregor has turned to Virginia Woolf (a creator who divides opinion almost as much as McGregor himself), the inspired re-definer of narrative or a monumental bore, depending on one’s viewpoint. What was initially billed as a three-act ballet has become a triptych, three works inspired by three different books, given very visual and choreographic different treatments, sharing a few dancers but, in essence, three separate ballets. The format can be problematic; Puccini with his operatic Il trittico and Balanchine with his balletic Jewels found the right formula. Without a thread running through a disparate trio, it is inevitable that one will emerge as the least popular. And so it proves with Woolf Works.

The sub-fusc opening section of I Now, I Then is the strongest. It explores the world of Mrs Dalloway in uncharacteristically muted fashion, Alessandra Ferri, who it is impossible to believe is 52, walks and interacts with her younger self – a sparky Beatriz Stix-Brunell – her husband, the memories of the man she could have married and the forbidden love of another woman. McGregor is in atypical form here, toning down his usual extreme twitchings and lungings to deliver something altogether more ‘Royal Ballet’. This is a significant departure for him, perhaps inspired by Ferri’s luminous presence and movement quality (and her past as one of Kenneth MacMillan’s muses), and he provides movement of surprising lyricism. The set comprises three giant picture frames which turn on separate revolves, and offer striking images as characters weave in and out of the shifting perspective; video projections of 1920s London and computer graphics complete the visual element and the dancers are soberly clad, the men in period costume, the women in light gauzy dresses. 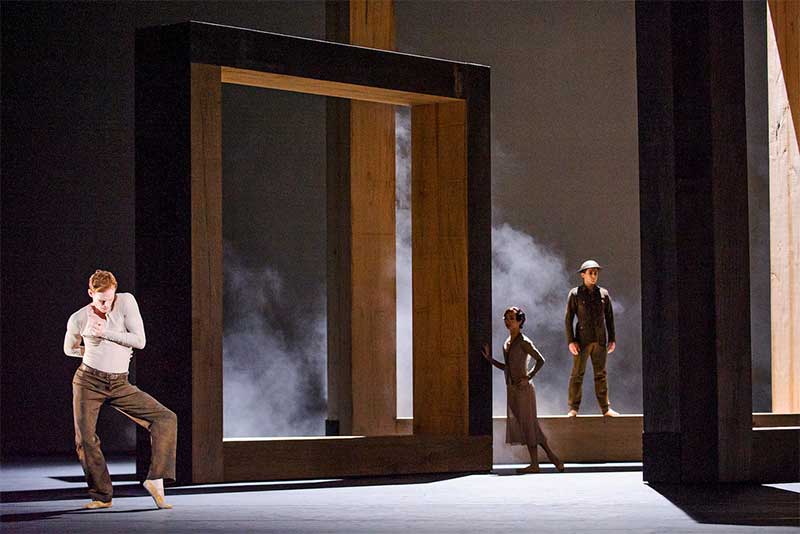 McGregor has also included a narrative strand including First World War veteran Septimus Warren Smith, his wife Lucrezia, and Evans, his dead wartime friend, perhaps to allow himself to choreograph for Edward Watson as Smith who has long cornered the market in disturbed, anguished movement. Watson is superb but in dance terms his section muddies the narrative, and in the absence of character names, it is pretty opaque. Without doing one’s homework, it would be impossible to guess what is going on. Max Richter’s score for this section is equally muted, and, at times, verges on the soporific.

In the Orlando-inspired Becomings, McGregor delivers something more like his usual fare: high-octane movement with all his trademark lifts, flicks, and hyper-extensions. Mortiz Junge’s designs start by evoking Elizabethan costumes which the cast gradually discard – some keep the odd ruff or doublet – to reveal the most unflattering flesh-coloured full-cut pants. This is perhaps the nearest that we get to the passage of time that is central to the book’s narrative but, apart from the initial indication of period, the move through successive generations and eras is unclear. It makes for the weakest section of the evening as the fuelled gyrations carry on with little focus.

The dancers are in top form, not least the bundle of energy that is Natalia Osipova, her uncommon strength used to the full in the most extreme of movements, and Paul Kay, one of the most interesting and dynamic dancers in the company, Edward Watson and Steven McRae, who are known quantities in McGregor’s work, are no less impressive. Despite the high-energy feel (mirrored by a more dynamically driven score), the movement palette disappoints and underlines that McGregor is not originally from the world of ballet: the sense of upward lift which informs the jumps of Classical Dance is almost totally absent, any departure from the stage surface used rather to emphasise the dancer’s return to earth, rather than his or her release from it. At 36 minutes it certainly feels too drawn out. The lighting here by Carter is simply extraordinary with a constantly fascinating use of lasers which ultimately creep out into the auditorium in lines of great fans of colour.

Tuesday (the heading for Woolf’s final – successful – suicide note) explores the world of The Waves, Woolf’s most experimental novel. The ballet is even more distant from the world of its inspiration than Becomings: after a tender and deeply felt pas de deux between Ferri and Federico Bonelli – on top form – six children rise up to stage level and play briefly, representing the six ‘voices’ of the author’s narrative. Any such literalism is quickly eschewed in favour of a large corps de ballet, extravagantly made-up and sporting tendril-like headpieces, who desport themselves with Ferri mesmeric at their centre. Waves? Thoughts? Memories? They ebb and flow in suitably water-like fashion even if they are restricted to limited movements as a black and white, slow-motion video projection of crashing waves plays above them. It is too simple to equate The Waves with the watery location for Woolf’s own suicide, but at least McGregor has Bonelli return and finally lay Ferri/Woolf onto the stage floor rather than have her filling her pockets and walking out into the river.

Woolf Works is a major undertaking. McGregor has here proved his harshest critics wrong and has produced a stimulating if uneven work, even if one suspects that it would all look rather less impressive without all the visual flummery that surrounds the movement. It can be counted as a success in its own right but has not successfully brought a new way of depicting narrative – ballet is characterized by many ‘evocations’ of literary works which avoid direct story-telling in favour of something more abstract. Does one understand what is going on? Often not, unless one is acquainted with the three works in question. Is this work in which artists can grow and deepen their interpretations? Again not. What Woolf Works is, however, is a step forward in McGregor’s own artistic journey.