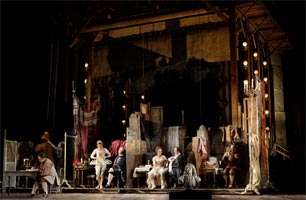 The story of the mysterious death of the French actress Adrienne Lecouvreur (1692-1730) – she died in the presence of Voltaire, who maintained that her demise was not by poison – is elaborated here in Francesco Cilea’s 1902 opera “Adriana Lecouvreur” by the librettist Arturo Colautti after Eugène Scribe & Ernest Legouvé’s play, which itself was the inspiration for three other operas of the same name. These sorts of melodramas have never gone out of fashion, and one was reminded of all those glorious film noirs, with their femme fatales, throughout David McVicar’s sumptuous production, with Charles Edwards’s baroque-theatre inspired sets. As usual McVicar blurs the lines between reality and the stage: characters occupy both, travelling seamlessly between the two. In the end, it was a statement of Adrienne Lecouvreur’s own life: she lived for the stage and died by it, and so McVicar, in a neat ploy, has characters from the play acted within the opera (Racine’s tragedy “Bajazet”) look over the dead body of the heroine.

Cilea’s music is hardly inspiring or revolutionary, very much following-on from Verdi, though without his invention or ability to link action and music, and sign-posting the much more integrated form of Puccini. It is pleasant enough to listen to, but as background, primary-coloured music, we are back (or forward) to those black-and-white rain-drenched noirs that Hollywood film studious churned out in the Thirties and Forties. As a piece of pulp entertainment it is, however, worthy of the Royal Opera House stage, made convincing by Sir Mark Elder’s devotion to the score, and the troupe of singers who take the absurd plot seriously. Only in the final act does Cilea’s music feel truly worthy, being the drama rather than merely supporting it. 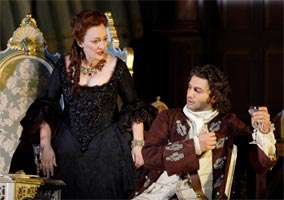 Jonas Kaufmann, as Maurizio, Count of Saxony, is the tenor of the moment, and has impressed greatly in recent years: his opening utterance – ‘La dolcissima effigie sorridente’ (What sweetness in your smiling face!) – was a triumphant start, and though his character is one in which events rule him rather than vice versa he grew in stature and his most impassioned and arresting singing came at the end, entering at the moment when all hope is lost (in the greatest of operatic traditions!) and then caressing the dying Adriana. 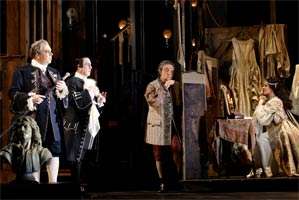 Scheduled for two performances only, Adriana, the woman who loves Maurizio – initially she believes him to be an officer in the Count’s army – was taken by German-born Spanish soprano Ángeles Blancas Gulín (she sang for an unexpectedly indisposed Angela Gheorghiu two nights earlier, too), a notable stage-presence whose voice, whilst not of the crystalline beauty that this part demands, has the stamina to produce dramatically edgy tones; and, when with Kaufmann, displaying a partnership that gripped. Adriana’s competitor for the hand of Maurizio is the Princess of Bouillon, here sung with command by Michaela Schuster (future performances in this run are assumed by Olga Borodina). Her response to Adriana’s ‘vengeance aria’, which itself was delivered with aplomb, mixing playful fun with biting sarcasm, was on the surface regal, but beneath one sensed the simmering jealousy and rage that makes this role a great operatic villainess.

There are many minor roles, and none was taken more consummately than Alessandro Corbelli’s account of the stage manager Michonnet, at once the go-between for squabbling actors as well as a helpful hand for Adriana (he uses his inheritance to retrieve her pawned jewellery): in parts moving because of the unrequited love that he feels for her. Also enjoyable was Maurizio Muraro’s Prince de Bouillon, at times fun when attention is on him.

There is much to wallow-in with this production: the stirring music and singing prime among them. The staging itself is not as imaginative as it pretends to be, but it supports the protagonists’ plights and aids the story-telling: no mean feat in what is a notoriously silly story – truth is always stranger than fiction.