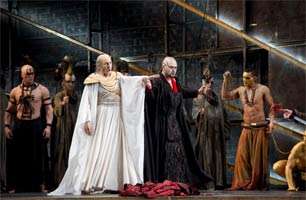 From the opening utterances of the ‘Prelude’ it was clear that this was going to be a special performance of “Aida” (its 499th at The Royal Opera House), this, the opening night of a revival of David McVicar’s production first seen in April 2010. The production has its peculiarities and silliness – bare flesh (a McVicar trademark), no sign of Egypt, and rather more Japan’s Samurai, and the bloodthirstiness of South American cultures – but, musically, and that is what is paramount, this was a great evening.

For all its reputation, which has been foisted upon “Aida” in countless productions, the opera itself is an intimate and moving experience: the backdrop of pharaohs, the Nile and pyramids are incidental (so long as they do not detract), with the only ‘big’ musical moment being in the second scene of Act Two, which leaves the love-triangle of Radames (Captain of the Guard), Amneris (Pharaoh’s daughter, in love with Radames) and Aida (Ethiopian slave, a princess) almost the whole opera for arias, duets and trios.

Stepping-in at extremely short notice – and making her Royal Opera debut – as the eponymous slave (replacing the pregnant Micaela Carosi) was Ukrainian soprano Liudmyla Monastyrska (she returns to these boards as Lady Macbeth later in the season), and what a debut! She had the measure of the part – grief and tireless love to ultimate resignation – with plenty of reserve for dramatic outbursts, as well as touching and controlled pianissimos. Her anticipation of what could be impending doom was vividly captured in the Act Three aria ‘Qui Radames verrà!’ (Radamès is coming here), which mixes designs for a better life: Monastyrska made it a beautiful, colourful creation; she was similarly captivating at the close. 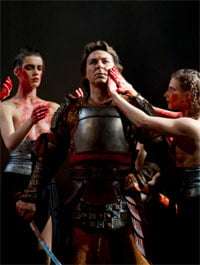 Roberto Alagna is not the complete Verdi tenor required for Radamès – his voice is not varied or big enough to sustain its many facets, especially the grand, heroic moments, demanded. However, the lyrical aspects he covered with aplomb. So, whilst his Act Three duet with Aida – ‘Pur ti riveggo, mia dolce Aida’ (Once more I see you, my sweet Aida) – lacked fervency; and the allusions to destiny and being a conquering leader of men – ‘Se quell guerrier io fossi!’ (If I were that warrior) – at the opening of the opera were somewhat absent, he had the measure of Radamès’s tender side, his love for Aida being palpable: their final duet was haunting and sublime. 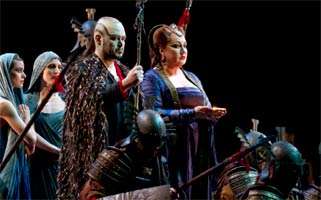 However, it was Olga Borodina’s Princess Amneris that stole this show. Hers was a complete performance: sly, in-love, vengeful and, ultimately, full of remorse. Borodina commands every inflection, secure top notes particularly vivid. As the performance went on, she got more thrilling: Act Four was a stunning, white-knuckle-ride of thrilling singing. Elsewhere, the lying-in-wait viciousness (she wants her man and will not countenance Aida’s love for him) was layered with black arts, the feigned tenderness delicious. The manipulative high priest Ramfis found Vitalij Kowaljow’s bass instantly recognisable for its evil malevolence. Michael Volle was perhaps too light for Amonasro, but Brindley Sherratt’s Pharaoh was dignified enough.

Fabio Luisi here made his Royal Opera debut: what a treat his weaving through Verdi’s score was, music often calm, restrained and distant, and Luisi pointed up these aspects, He had the measure of the ‘grand opera’ aspects, too. Terrific! If the sets offer very little, with some action tired and comunicating little, then the big choral moments are secure and the music and singing are great.