Turnage
Anna Nicole – Opera in two acts to a libretto by Richard Thomas [Commissioned by The Royal Opera: World premiere] 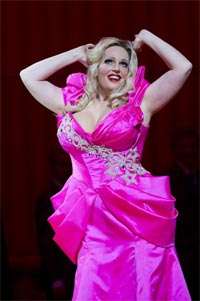 Few stage-works in recent years can have been as keenly anticipated as “Anna Nicole”, Mark-Anthony Turnage’s opera to a libretto by Richard Thomas on the rise and fall of a wannabe which itself says much about the hollowness and vacuity of the American Dream. And with a sell-out run of six performances (though there were numerous unoccupied seats on this first night) the scene was set for its own triumph or tragedy. The outcome is a drama that, while it provided few revelations, largely justified the hype as have few recent British operas. 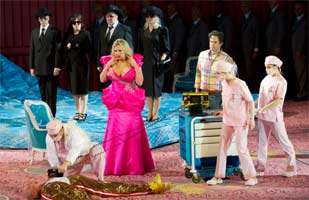 Memory recalls that, after his second opera “The Silver Tassie” (first staged a decade ago), Turnage expressed an unwillingness to return to the genre. That he has done so might simply be because a Royal Opera commission was too good to turn down, but he has at the same time taken the opportunity to re-evaluate his overall approach. Gone are the broad dramatic pacing and the often orchestra-driven content: comprising two acts (lasting around 57 and 54 minutes) of sixteen scenes, “Anna Nicole” moves, for the most part, at a hectic pace as though to underpin the dizzying lifestyle of its main protagonist. Character development is subliminal – which does not mean the opera is devoid of pathos, only that it rarely draws attention to itself. Noteworthy is the role of the chorus: contributing for almost all of the first act and initial half of the second, it takes various functions from ‘Greek Chorus’, via social commentators, to (dis)interested bystanders – giving a claustrophobic quality as makes the closing scenes bleaker and more austere by its absence.

Musically the work has seen Turnage go back to something approaching his roots, or at least those jazz-permeated compositions written in the wake of his trailblazing first opera “Greek”. There is frequent recourse to blues as well as an orchestral jazz redolent of such figures as Leonard Bernstein, Gunther Schuller and Bill Russo. More populist elements in the vocal writing look back to the heyday of the American musical, while also evoking the stage hybrids of such as Marc Blitzstein or Douglas Moore. Which is not to say that Turnage has drawn specifically on such composers; only that the opera derives from and fits into an avowedly American context. And, in needing to be sung with mid-Western accents, it could yet prove ready-made for the American stage – though a host of corporate interests might well disagree. 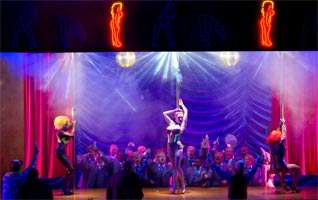 In terms of staging, there were few surprises for those familiar with Richard Jones’s work these past two decades. Understandable he should have utilised elements from his controversial production of “Lulu” for such as the lap-dancing scene and decked out others with elements of kitsch Americana that would seem more pertinent had they not become so universal. Still, the staging seldom failed to underscore the drama – a notable exception being the curiously mundane scene of Anna Nicole’s giving birth on pay-per-view TV – and was often enhanced by Miriam Buerther’s alternately glitzy and utilitarian sets, Nicky Gillibrand’s often gaudy costumes along with Mimi Jordan Sherin’s brashly resourceful lighting. Aletta Collins contributed some effective choreography, not least the stealthy cyber-like camera crew who multiply in abundance as the opera heads towards its desperate denouement.

Richard Thomas’s libretto is as packed with expletives and double entendres as might be expected from the writer of “Jerry Springer: The Opera”. Few of these are genuinely witty but they are effective, not least in encouraging the audience to laugh knowingly at a culture of which they are most likely an (unwilling?) part. The trend for high profile and ‘celebrity’ librettists has proved to be a largely unfortunate aspect of opera in Britain (and no doubt elsewhere) throughout the past decade, but that provided by Thomas at least works to the advantage of both the drama and, most importantly, the music. 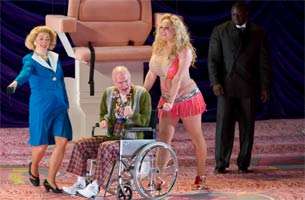 Vocally the opera was cast from strength. Eva-Maria Westbroek had the measure of the title role in all of its sensational ascent and sordid decline, encompassing both its ruthless opportunism and strained yet not unmoving pathos. Nor was her acting ‘undone’ by the variety of bodily accessories she was required to wear, a sense of identity emerging almost in spite of itself. Susan Bickley seldom fails to impress, and her feisty yet vulnerable Virgie was no exception. Gerald Finley was eloquent as Stern, lawyer and general factotum, while Alan Oke impressed as the hedonistic tycoon J. Howard Marshall II (a part apparently envisaged for the late Philip Langridge).

Among smaller roles, Jeremy White was appropriately brutish as Daddy Hogan, Loré Lixenberg a much put-upon Shelley and Grant Doyle an uncomprehending Billy. Andrew Rees was a saturnine Doctor Yes, while Peter Hoare turned in a cool and calculating Larry King. The highlight in this respect, though, was Dominic Rowntree’s assumption of the autistic teenager Daniel – a ‘silent witness’ until after his suicide, when the list of drugs he had likely consumed was sung with a winsomeness that, while only briefly, opened the opera out onto a whole new level of compassion. 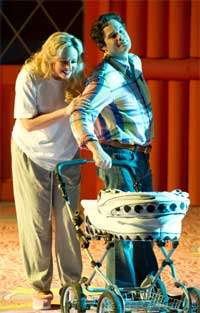 The Royal Opera Chorus acquitted itself ably in its largely continuous and multi-faceted role, for all that a degree of textural uniformity was inevitable given its omnipresence. Antonio Pappano secured a lively response from the Orchestra of the Royal Opera House, making the most of Turnage’s incisive rhythms and grating harmonies. A degree of amplification for both singers and players was occasionally intrusive, but seldom to the detriment of the music even if the gain in vocal clarity seemed questionable (surtitles are provided). Mention should be made of the Band featuring John Parricelli, Peter Erskine, and John Paul Jones – the latter two providing a ‘drums and bass’ backing to the increasingly debauched party in Act Two.

The response to the opera was as effusive as might be expected given the inescapability of the subject and the culture that it represents. To which end, see “Anna Nicole” but do not despair – it is, after all, only life that is the loser.