Gerald Barry
Alice’s Adventures Under Ground – Opera to a libretto prepared by the composer based on the texts of Lewis Carroll’s Alice in Wonderland and Alice through the Looking Glass [co-pruduction with with Irish National Opera and Dutch National Opera; world-premiere staging; with English surtitles] 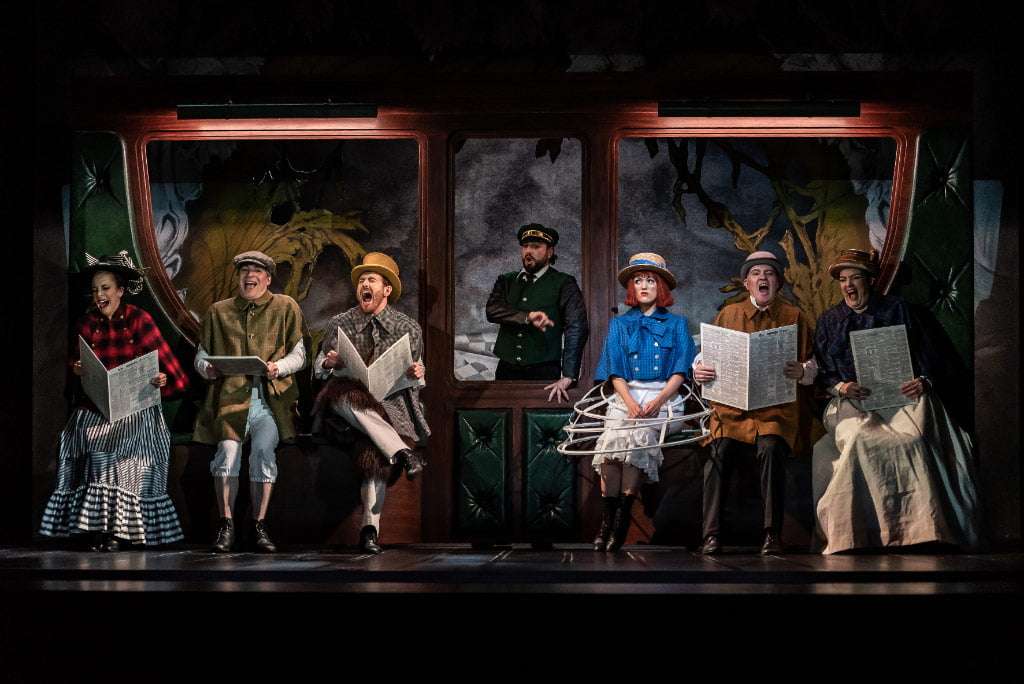 Gerald Barry’s music can be a heady concoction of pulsing rhythms, heavy-duty wind sonorities and cripplingly difficult vocal lines (not forgetting multiple cultural associations) which can make for a bewildering experience. For some it’s an assault on the senses, an exhausting roller-coaster ride. But Barry’s absurd musical language is perfectly suited to the anarchic world of Alice’s Adventures Under Ground – drawn from an early version of Alice’s Adventures in Wonderland, and Through the Looking Glass – and its unbroken fifty-minute span at the Royal Opera House rushes past before you can exclaim “Curiouser and curiouser”, one of many well known phrases absent from this ingeniously conceived conflation.

All the action is framed within a Victorian toy theatre, with hand-drawn sets, transporting us to the realm of Lewis Carroll. Our heroine Alice, in a hooped skirt frame, is attired throughout in symbolically innocent white. Between hurtling down the rabbit hole and her crowning as Queen, the music seems to run amok in counter-intuitive word accentuation and pitch contours resembling a hospital crash chart. But a superb cast (some already familiar with the score when its European premiere was given at the Barbican in 2016) make light work of its virtuosic demands. Early on Claudia Boyle as Alice despatches the word “down” to relentless arpeggio figuration across a dizzying two octave range, taking top Cs in her stride.

Such is the manic pace of this first staging, (performed with alternating casts), it helps if you’re acquainted with these classic books, otherwise you’ll have trouble unravelling the bizarre happenings that replace any real narrative thread. It operates like a series of surreal sketches, part panto, part Monty Python, but without any helpful signage or libretto that will clarify, for example, the sudden change from director/designer Antony McDonald’s “Drink me” bottles to “Eat me” cakes and, not least, the effect they have on Alice. Fabiana Piccioli provides atmospheric lighting and Lucy Burge as movement director keeps tight grip on physical action. 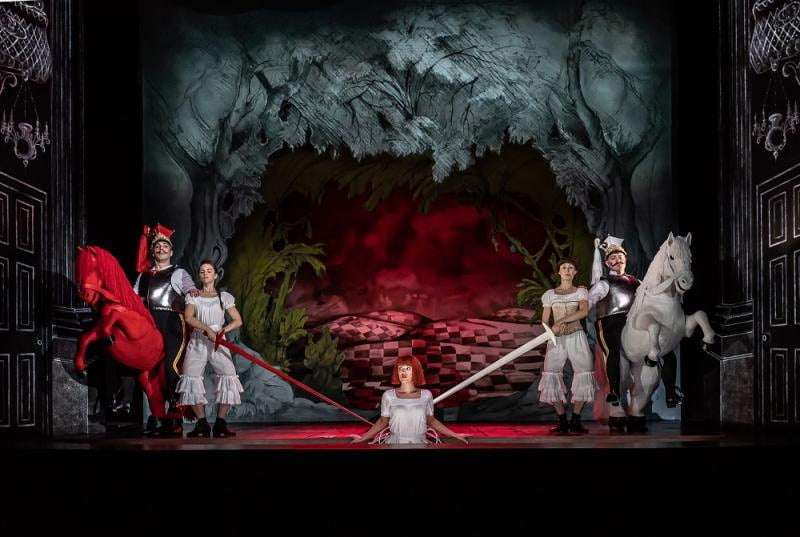 From the first of Lewis Carroll’s volumes we watch her liaisons with the Duchess and Queen of Hearts (both taken by an imperious Clare Presland), and squeezed in between the Mad Hatter’s tea party and a foreshortened Trail of the Knave of Hearts there’s the delightful Lobster Quadrille with “Said a whiting to the snail” beautifully sung in a rare unaccompanied passage for men’s voices.

The directorial invention continues apace as hand-held chess boards make clear we’ve burst into Through the Looking Glass where the nonsense poem Jabberwocky is delivered in French and Russian to the tune It’s a Long Way to Tipperary. Beethoven’s Ode to Joy surfaces in Humpty Dumpty’s melancholy rhymes – charmingly rendered by Joshua Bloom. Beyond the magical arithmetic, pearl-topped oysters and comical hats of Tweedledee and Tweedledum there’s a rare moment of calm with the arrival of the tournament between the Red and White Knights, a fabulous set piece and further demonstration of McDonald’s colourful imagination.