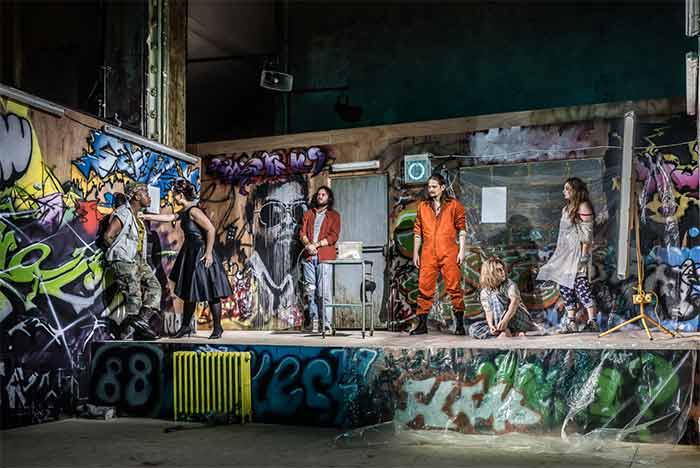 The curse of the House of Atreus strikes again in Handel’s Oreste (1734) as the son of Agamemnon finds himself on the island of Tauris and nearly sacrificed at the hands of his sister Ifigenia in accord with the murderous cult which the king, Toante, has established, requiring that all incoming foreigners be killed and offered to Diana so as not to present a threat to his rule (perhaps a would-be paradigm for a “hard Brexit”? Or a Trump presidency?) Violence begets and compounds violence, however, in Gerard Jones’s hard-hitting production, without any hope of expiation – either mental or moral – as the deranged characters take it in turns to inflict further acts of violation to the body of Toantes at the end of the drama, even after Ermione has wrought the fatal blow with a hammer.

Up to that point the concept worked fairly well in running parallel with Handel’s original. Toante’s island becomes a seedy, graffiti-ridden urban underworld of violent abuse and subjugation in which he rubs out those who penetrate it and threaten his position, through the cowed and pitiful figure of Ifigenia – her bruised legs suggest physical hardship or that she is a junkie. (Jones describes his interpretation as “post-social”, which is presumably another way of saying ‘dystopian’, and his premise for doing so seems questionable as he argues that the drama inhabits a closed world in which we see nobody else but the six specified characters, leaving a power vacuum at the end – in which case from where do the previous sacrificial victims of the heinous cult come?) Oreste’s being pursued by Furies in the original is made intelligible here as he appears throughout as an unbalanced, nervously detached figure, not quite aware of what is going on around him, which is convincingly sustained by Angela Simkin’s acting. 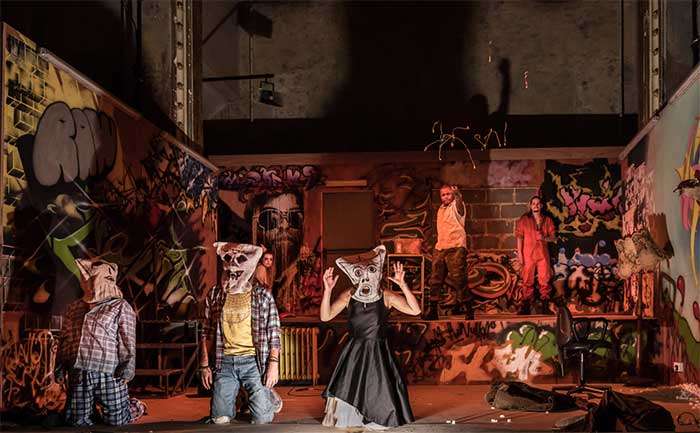 Jones’s ending, though, subverts Handel’s intention in that the characters remain enslaved to their mental demons, or indeed succumb to them in Ermione’s case, having all acted upon a seemingly rational motive beforehand to turn against Toante together. It leads to some decidedly weird psychosexual ramifications as Oreste and Ifigenia show amorous interest in each other as brother and sister, with the latter wearing a filthy wedding veil, and they try to clean their blood-smeared faces with an all-in-one baby grow. In Richard Strauss’s Elektra, Orestes’s other sister, Chrysothemis, curiously yearns for a baby prior to his appearance to avenge their father and kill their mother, but this takes the procreative urge to a bewilderingly warped level. Maybe the original sin of their ancestors’ hideous actions leaves no human instinct untainted.

More disturbing still was the response of some in the audience to laugh as Toante’s dead body was gratuitously mutilated by Oreste, Filotete, and Ermione. Whatever point Jones makes in negating any possibility of catharsis at the tyrant’s death, it is evidently not meant to elicit levity. His point may echo that of Michael Haneke in his powerfully unsettling film Funny Games which precludes the viewer from drawing any easy or satisfying conclusions as to the motivations of those perpetrating the violence there. Certainly both that film and this production eschew so straightforward an analysis as a chain of cause-of-effect determined by resentment or desire for revenge.

They shame any such anaesthetised attitude to violence that would applaud its efficacy or justice as an act of retribution, and that part of the audience’s response here is surely just as telling in its latent toleration of violence as an acceptable facet of social life, as the now almost unthinking and automatic display of poppies at this time of year whose effect is to sanitise and push out of active thought the uncomfortable reality of the consequences of violent force. One may take issue with Jones’s decision to deny completely the possibility and beauty of Handel’s redemptive vision in his score – and it jars for me, especially after Jones’s clever engagement with the drama initially – but that is, at least, an honest and unflinching stance on his part which demands something more than shrugging amusement in answer. 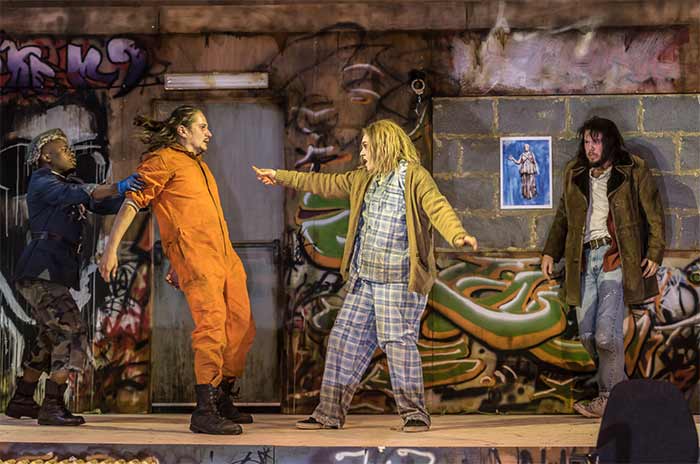 Be that as it may, this is a generally excellent performance. The singing tended to be over-projected in the small space of Wilton’s Music Hall – particularly on the part of Jennifer Davis’s Ifigenia – but that could be said to match the uncompromising attitude of the production. To be fair to Davis, her singing is technically accomplished and well-rounded, contrasting with the more quietly focused interpretation of Angela Simkin’s Oreste. As the latter’s wife, Ermione, Vlada Borovko was especially impressive for the precision of her tricky coloratura which did not come under strain whatever the demands Handel makes. Gyula Nagy’s stentorian account of Toante’s sidekick-turned-opponent Filotete was well acted but musically sometimes too effusive, whereas Thomas Atkins as Pilade was controlled, burgeoning to good effect only in his apparently triumphant aria near the end. Simon Shibambu’s Toante was sonorous and authoritative, perhaps to the extent that more malevolent power would not have been amiss, but his musical integrity outweighed any such lack.

The well-driven support by the Southbank Sinfonia under James Hendry brought out the drama of the music, if not always its grace and charm. Sometimes it sounded too thin (inevitably with one to a part in the strings, two oboes, and two horns) or pressed on too impatiently in others where a little more patience or nuance in expression and dynamics would have enhanced proceedings. But given these limitations, the ensemble certainly imparted considerable vigour throughout the two-and-a-half hours.

Despite some inconsistencies in the production and performance then (not least Toante’s sinister party at the end of Act Two, resembling a Punch and Judy pantomime rather than an act of psychological torture played upon his prisoners), Jones’s work stimulates and provokes just as opera should, instead of presenting tidy, comfortable complacencies. Three stars indicate not so much any inherent defects but some incoherence and unanswered questions that undermine what would have been a more gripping vision, an unusual and disturbingly memorable interpretation of Handel. Not for the faint-hearted!