Bellini
Norma – Opera in two Acts to a libretto by Felice Romani [sung in Italian, with English surtitles] 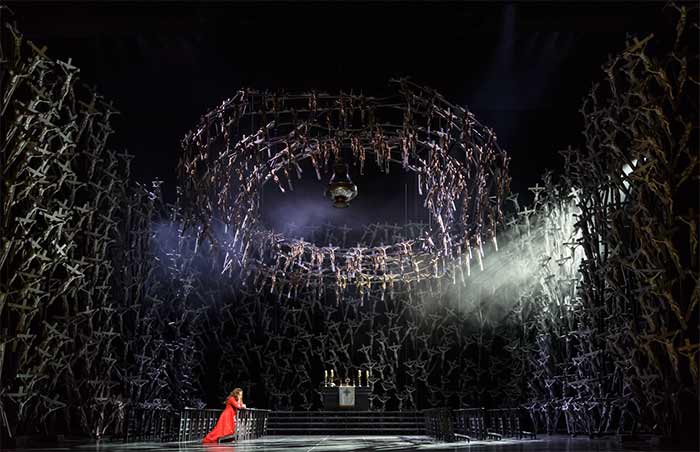 From the same team that created Enesco’s Oedipe for the Royal Opera comes this new staging – its first for thirty years – of Bellini’s Norma, so it will come as no surprise that the Spanish-Catalan director Àlex Ollé does not shy away from the big gesture and the even bigger concept.

In its original form, Bellini’s bel canto masterpiece places the Druid priestess Norma of the down-trodden Gauls in secret love conflict with their Roman overlord Pollione, who is father of Norma’s children and has transferred his passion to the younger, more biddable Adalgisa, Norma’s acolyte.

Ollé has dispensed with this classic dichotomy, instead pushing the high-voltage religious content to the max. The set’s main element are huge hedges made of hundreds of crucifixes, and at first in the dim light it looked like an all-surrounding crown of thorns. As quickly became clear, the enemy wasn’t Rome but the Roman Catholic church in a modern setting that yearns for the certainties, rigour and pain of old Catholicism. The original’s duality has been taken over by a monolithic overview. 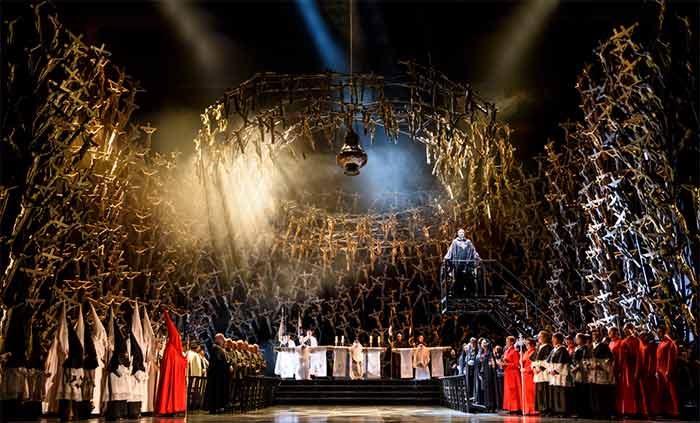 Norma is an object of cult veneration and her soldier-father is the grand master of a fascist, military order of knights decked out in sumptuous heraldic costumes (reminiscent of the Knights of Malta). When Pollione sings of a merciful God of love, you infer that he is under the same faith umbrella but is appalled by the extremism of this unyielding ‘divine’ army.

The setting recalls the triumphalist style of Spanish Catholicism – the sort of church militant that allowed General Franco to take part in a religious procession, walking under a canopy normally reserved for the sacrament – and it works well in Act One’s ceremonial surrounding Norma’s ‘Casta diva’ invocation to the moon, full of Catholic ritual and paraphernalia, even including the Botofumeiro (the giant censer from the cathedral of Santiago de Compostela, its second appearance in an opera this summer in England) billowing incense into the auditorium.

With marvellous costumes, including the forbidding conical headgear worn during the Spanish Holy Week processions, Act One is quite a spectacle, although Roman Catholics in the audience will raise an eyebrow at the sight of Norma and Adalgisa as fully-functioning priests. 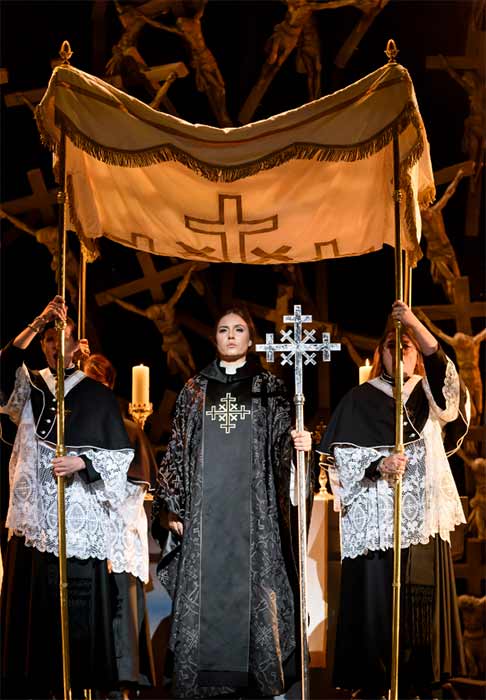 The staging loses its way in Act Two’s first scene of a modern luxury apartment in which Norma, having learnt of Pollione’s and Adalgisa’s duplicity, returns home to contemplate the murder of her two children, even placing one of them on a plastic sheet – her tug of love and duty is drawn too crudely, albeit elaborately – but the screens of crucifixes, even thicker this time, were back for the finale with lots of machine-gun-toting men in big coats, its power only let down by the clichéd – and superfluous – reworking of Norma’s death.

The shade of Callas still haunts Norma, and Anna Netrebko’s short-notice withdrawal from this production has only contributed to its mystique. The Bulgarian Sonya Yoncheva, singing the role for the first time, triumphed. Her portrayal of Norma’s different facets of betrayed lover and priestess is hampered by the production, but despite looking like a trendy Anglican vicar in Act Two she is a commanding figure nonetheless. Her pure soprano doesn’t yet have that dark undertow to express the pain in the role, but she gave a beautifully trance-like ‘Casta diva’, she has an intuitive understanding of how the arias float imperceptibly out of the recitative, and her coloratura sounded unforced and natural to the music. 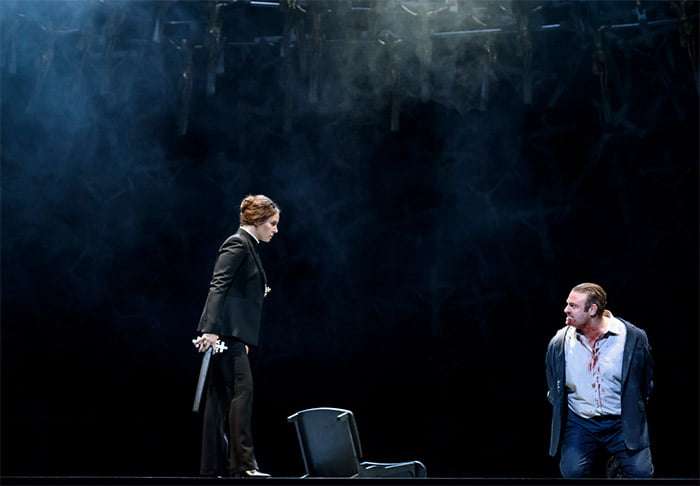 Joseph Calleja’s Pollione, another role debut, lurches between extremes of lyricism and tenor heroics. He was at his tender best in the Act One duet with Adalgisa, but Pollione’s decision to join Norma in death lacked conviction. As Adalgisa, Sonia Ganassi has a gentler approach that contrasts sympathetically with Norma’s more declamatory style, and her pliant mezzo suits the role and complements Yoncheva in the brilliantly staged confession scene in Act One.

Brindley Sherratt, as Oroveso, had high-register problems at the start but settled in time for the rousing finale.Antonio Pappano draws a weight and edge from the Orchestra that gives the score an epic quality more suggestive of Verdi, and it suits the production well. The Chorus was magnificent in the final scene.

Norma the opera can just about adapt to Ollé’s staging, but like most concept productions it overwhelms the people singing in it.