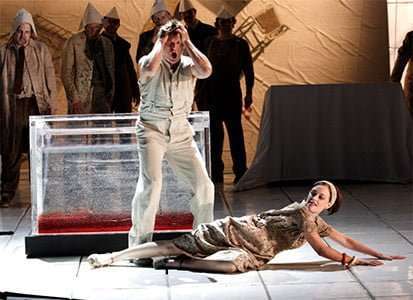 This is the second revival of Keith Warner’s production of Wozzeck since the Royal Opera House first mounted it in 2002. With a highly committed cast too, it remains as compelling and harrowing a realisation as this unremittingly raw opus could demand, even if this production’s sequence of scenes tends to be more episodic than a progressive narrative in which Wozzeck’s mental decline can be clearly traced.

The setting takes its cue from the bizarre medical and dietary experiments Wozzeck is forced to undergo at the hands of the Doctor in order to scrape together something of an income to support his Marie and their child. For much of the opera the audience sees Wozzeck confined to a claustrophobic white-tiled laboratory, hemmed in like an animal used for testing. Four glass tanks, containing respectively a model city, toadstools, specimen jars with organs, and water, are periodically moved around to emphasise the plight of Wozzeck, and indeed that of the other characters, as the insignificant playthings of chance and nature. Finally Wozzeck murders Marie over the tank of water, and that becomes the bloody pool in which he drowns himself – failing, even in death, to escape from the terrible situation to which he has been reduced.

Wozzeck and Marie’s dwelling is a small dark chamber to one side of the stage, essentially an adjunct of the laboratory in which Wozzeck is physically and psychologically trapped. But he seems largely excluded even from this limited means of consolation, as he rarely enters the room, and during the tavern scene (which his home temporarily becomes), the division between the laboratory and the inn effectively bars him from going in, just as Marie’s infidelity with the Drum Major drives her and Wozzeck further apart emotionally. 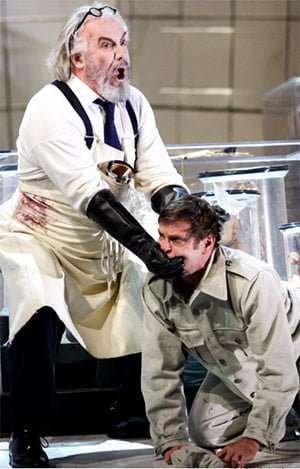 On first-night, Simon Keenlyside’s Wozzeck was reserved from the beginning, already alienated from everything and everyone around him. As his actions and motivations were inscrutable, his murder of Marie seemed all the more shocking and unexpected, given that he appeared already to have borne a great deal passively and indifferently. His singing conveyed exactly that internalised, impersonal sorrow, rather than outward hysteria and anger. Hardly less pitiable was Karita Mattila’s Marie, who variously expressed grief, resignation and desperation, the latter most impressively so at the beginning of Act Three as she read the story of the woman taken in adultery in St John’s Gospel, and she cried out for God’s mercy upon her own infidelity. Along with the shattering crescendos sustained by the orchestra once she had died, this music resounded in the mind long after its performance.

In the earlier part of the opera, Allison Cook as Margret was a good foil for Marie, as she taunted the latter for the improper interest she took in the soldiers, leading Marie to reflect on her status as a prostitute. Ever the busybody neighbour, it was Margret who noticed Wozzeck’s blood-stained hand in Act Three, which Cook expressed with horror. In contrast, John Easterlin evinced sympathy for Wozzeck as his friend Andres. In appearance and sound Endrik Wottrich’s Drum Major was suave and not necessarily an exploitative monster. But the choreography of the production makes it clear that his taking sexual advantage of Marie at the end of Act One was not born of any real affection for her, nor was her acquiescence any more sincere than her need for the material rewards she received – not a romantic entanglement that could bring either of them happiness or redemption.

Whatever weight and menace John Tomlinson brought to the role of the crackpot Doctor was unfortunately marred by the musical effect of the bulging out of his sound as he reached for the high notes. His fans will not have been disappointed however, and it is fair to say that his performance provided, in the context, a sort of grimly humorous, sardonic relief in his indifference to Wozzeck’s dignity and well-being, as well as to the Captain’s. The latter’s platitudes and moral haughtiness make him one of Wozzeck’s odious harriers, which he essentially remains in this production. But in Gerhard Siegel’s singing there was also a weariness and fear that made the Captain as much of a victim of the things that beset him (time, eternity, death), as Wozzeck is, warped by his terrors. No less a victim is the Child, played with almost unbearable poignancy by Sebastian Wright as a hapless onlooker upon events, occasionally cowering under the table or bed to seek what meagre security he could.

Having recently conducted Parsifal at the Proms, Mark Elder’s interpretation of Wozzeck was at times similarly lucid and imbued with something of awe and compassion. At the very opening the pace seemed a little turgid, but this soon picked up: the score was instilled with dramatic urgency at important or pointed moments, without becoming unduly rushed and creating artificial tension or stress. Effective too was the Mahlerian sarcasm of the sickly sweet violins to underline Wozzeck’s observation that the exercise of virtue is all very well if backed up by money, and the specious, chilling edge to the trumpets’ evocation of the threat of war as Marie and Margret discussed the soldiers.

Together, all the elements of this production rightly make for an unsettling experience, but nevertheless it should be seen so as to make us confront those phenomena and forces which hamper individual freedom and fulfilment, as well as to consider the ways in which we unwittingly contribute to those obstructions in so-called civilised society.