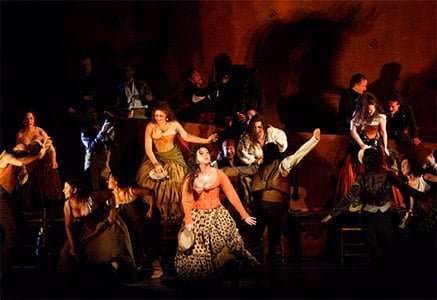 As the ever-informative notes of the Royal Opera House programme informed us, Bizet’s Carmen is one of two operas to have passed its 500th-performance milestone in the House. So it is one of the company staples, undoubtedly popular, and of course as a seasonal offering is selling well. Sad then to report that in this revival of Francesca Zambello’s 2006 production the old warhorse felt as if it needed a little more love and attention to dispel a feeling of distinct routine about this performance. This is not to say there was anything wrong with the singing, but the combination of vocal and histrionic sparks needed to bring to work to dramatic life barely ignited let alone flew.

Zambello’s grand-scale production must shoulder some of the responsibility. It has always seemed a bit gimmicky and a lot of the extraneous accretions distract rather than enlighten. Some of the poultry that used to adorn the streets of Seville may have vanished, but the appearance of the donkey (twice) and Escamillo’s black stallion (twice) clutter the acting space and prevent the protagonists from taking centre stage and interacting. Zambello’s direction has an unwelcome and rather inappropriate feel of an old-fashioned “stand and sing, dance, sway your hips and reveal a bit of leg” presentation one thought had been consigned to history. 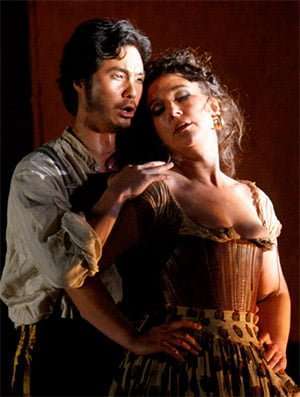 Dramatic truth seems to play second fiddle. Would the smugglers really leave Lillas Pastia’s tavern in a blaze of gunfire having spent most of the Act trying to be secretive? Tying up one officer would hardly prevent the rest of the battalion from acting! Would Micaëla not be visibly alarmed or appalled at Don José’s almost-abusive treatment of Carmen towards the end of Act Three and reconsider her feelings for him? Worse, some of the off-stage singing effects (Don José in Act Two and Escamillo in Act Three) brought inappropriate laughter from many in the audience. True the opera has is comic side (Frasquita and Mercédès’s humorous predictions of their futures in the cards for example), but much of the action is deadly serious and deserves to be treated as such.

The monumental quality of this staging, with its feel of a musical, means that poor Carmen in particular, but also Don José, struggle to create an identity. The potentially potent mismatch of opposites did not really register here, and there was no fatalism in this Carmen’s approach to life. Her reading of the potency in the cards barely registered, and there was no semblance of either character being aware of the manipulative destructive quality of their relationship – surely vital as part of their chemistry. It was all rather ordinary.

Although the Orchestra was on exceptional form with the entr’actes being particularly beautifully played (when one could hear them properly over the wretchedly noisy choreography), Daniel Oren’s conducting felt somewhat routine and even flaccid, if singer-friendly. There was little revelatory or newly- minted here. The cut at the start of Act Four was also energy-sapping and deprived the Chorus of the beginning of one of its showpiece moments; one needs to feel the sense of the private drama being played out in the crowded throng.

Christine Rice has previously sung the title role for ROH. Her warm mezzo has all the richness and voluptuousness of tone one could want. She inflects the text well and phrases wonderfully. Yet, as directed, she was somewhat faceless. One knows her capable of a much more intense and considered portrayal than here. Yonghoon Lee displayed his robust tenor to advantage, but he is more an Italianate tenor than a French one, and more finesse was needed in Act Two in particular. He was appropriately desperate in Act Four, however. Sarah Fox was a fluttery likeable Micaëla; and although she brought poise to her aria, the character’s inner strength of purpose and moral compass were not brought to the fore. Kostas Smoriginas was a careful rather than a dangerous Toreador.

Carmen has some terrific cameo roles – and these were more strongly delineated. I particularly liked Nicolas Courjal’s confident Zuniga and Rachel Kelly’s Mercédès indicated a Carmen in waiting. All in all, although there were musical and vocal felicities, this Carmen was all a bit safe. The audience deserved a bit more bull!