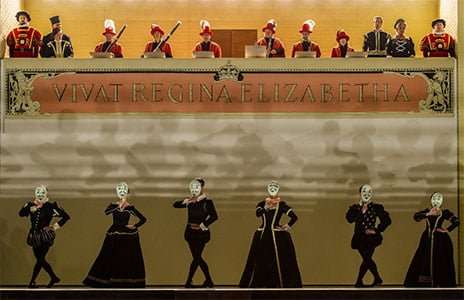 Sixty years to the month since its premiere was greeted with oh-so-British disapproval – less a Stravinskian ‘riot of spring’ than ice-cold courtesy from an audience that would probably have preferred Edward German – Benjamin Britten’s Coronation opera has returned home to Covent Garden. A problem piece in some respects, Gloriana is nevertheless an absorbing pageant that’s packed with vivid characters and rewards its audience with two-and-a-half hours of glowing, harmonically rich music.

Despite successful productions by Sadler’s Wells (later revived when the company had become ENO) and more recently by Opera North, Gloriana has always struggled for acceptance. Decca even excluded it from the recorded canon in Britten’s lifetime, only getting round to it in 1993. Was it secretly proscribed by some long-dead flunky in the Lord Chamberlain’s office? Or did the arts establishment simply forget about it? Either way the opera can’t have caused our own newly-crowned monarch any lasting distress as both she and the Queen Mother remained famously close to Britten throughout his lifetime. 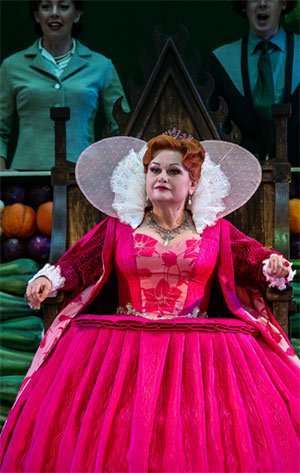 The present Queen makes a couple of guest appearances in Richard Jones’s new Royal Opera co-production (with Hamburg State Opera): a silent representation of her younger self in 1953 bookends the evening as she attends an improbably well-resourced church-hall community play. In theory this is an ingeniously simple idea that complements the opera’s cavalcade nature, but it carries a fatal flaw. Gloriana, episodic and steeped in self-conscious grandeur, needs a director capable of dramatising its beating heart, namely the monarch’s struggle to control an amour fou; but Jones’s meta environment, far from creating intimacy, adds an extra layer of emotional distancing to the human stories within the opera – a filter upon a filter that’s more of a passion-killer than either the Queen’s bald pate or the errant Earl’s yellow doublet and hose. This alienation proved particularly unfortunate given the engagement with which Susan Bullock (Elizabeth) and Toby Spence (Essex) inhabited the scene in Act Three when the young hothead bursts into an ageing Queen’s bedchamber. Energy crackled as it should, but starved of a truthful dramatic context it failed to catch fire.

Bullock’s steely soprano was unappealing during early scenes which show the Virgin Queen’s public face, but its harshness somehow suited the character. At more intimate moments she tamed the shrill edge and her dramatic gifts took over. As for Spence, it was a joy to see him back on the boards following a serious illness. His physical engagement with the role – all those galliards and lavoltas, not to mention the fencing – was as unconstrained as his voice, which has happily regained its full lustre. The Queen’s wasn’t the only heart to be melted by his second lute song. 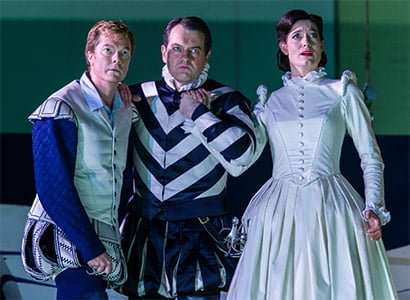 Mono-monickered designer Ultz has provided décor that favours Jones’s beloved sickly-green and vividly evokes a world of warm teas and whist drives – the kind of place Albert Herring would have recognised. Jones’s insistence that his cast emulate church-hall acting styles was often amusing, but it did mean that when Kate Royal’s impassioned Lady Rich made her final, vain intercession on behalf of her condemned brother, suspension of disbelief was off the menu.

Right down to the well-drilled children who announced the scenes and tended to the ravens in the Tower, the predominantly home-grown cast was superlative. Andrew Tortise grabbed the attention as the Spirit of the Masque; Jeremy White was equally charismatic as the Recorder of Norwich and Jeremy Carpenter was quite outstanding as the Queen’s “trusty elf”, Robert Cecil.

Paul Daniel’s long-breathed account of the score, authoritative but verging on the leisurely, made for a lengthy evening, compounded as it was by several drawn-out scene changes. The conductor’s reading was ravishingly shaped, though, and the Orchestra of the Royal Opera House communicated colours with absolute stylishness. Felicitous moments such as the discreet string ornamentations to the ‘lute’ (harp) music, and segues between the on-the-stage band and the pit, testify as much to the musicianship of Daniel and his musicians as to the composer’s genius.

Although Britten’s respect for William Plomer led to further collaborations on the three Church Parables, the librettist’s work on Gloriana is dramaturgically unsound. If only the two men had dropped some of the courtly dancing and the choral dances – exciting as these are, and wonderfully sung by the Royal Opera Chorus – not to mention the blind Ballad Singer (although Brindley Sherratt was exceptional in the role), they would have had time to address the development of several significant characters who, as things stand, are little more than ciphers. We would have cared more about the humiliation of Lady Essex (the wonderfully resonant Patricia Bardon); we might have rooted for Lord Mountjoy (an imposing Mark Stone) during his confrontation with the Queen’s “lordly boy”; we may even have better understood the demons that drive Essex. No matter; such musings are academic. We have what we have, albeit hobbled on this occasion by the vagaries of Richard Jones.