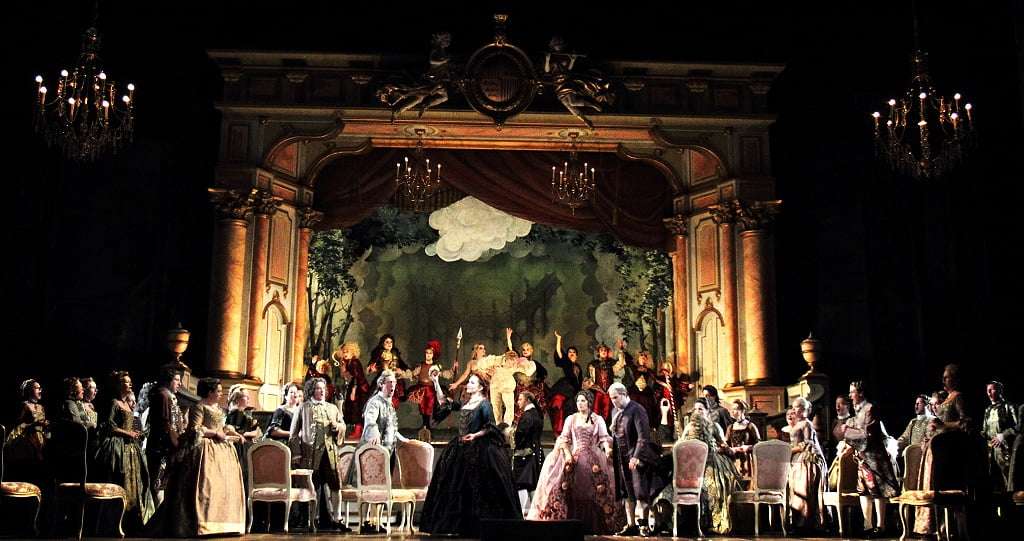 It says a lot for the resilience of Cilea’s Adriana Lecouvreur that it is not completely swamped by this sumptuous production. Just about maintaining a toe-hold in the repertoire, it’s a full-blown, four-Act melodrama (based on a play that was a star-vehicle for Sarah Bernhardt) torn between Italian romanticism and verismo by a composer who, along with Giordano, Montemezzi, Mascagni and Leoncavallo, got into his stride around the turn of the last century and who now has the dubious distinction of being a one-hit composer.

David McVicar’s staging, new in 2010 and at the time the Royal Opera’s first in nearly a century, is back for its first revival, with Angela Gheorghiu returning in the title role of the 18th-century French superstar actress, who according to lurid legend was murdered by the Duchesse (upgraded in the opera to Princesse) de Bouillon, her love-rival for Count Maurice of Saxony. The real Lecouvreur died from natural causes; but in those days as in these, why let historical fact get in the way of good box-office? 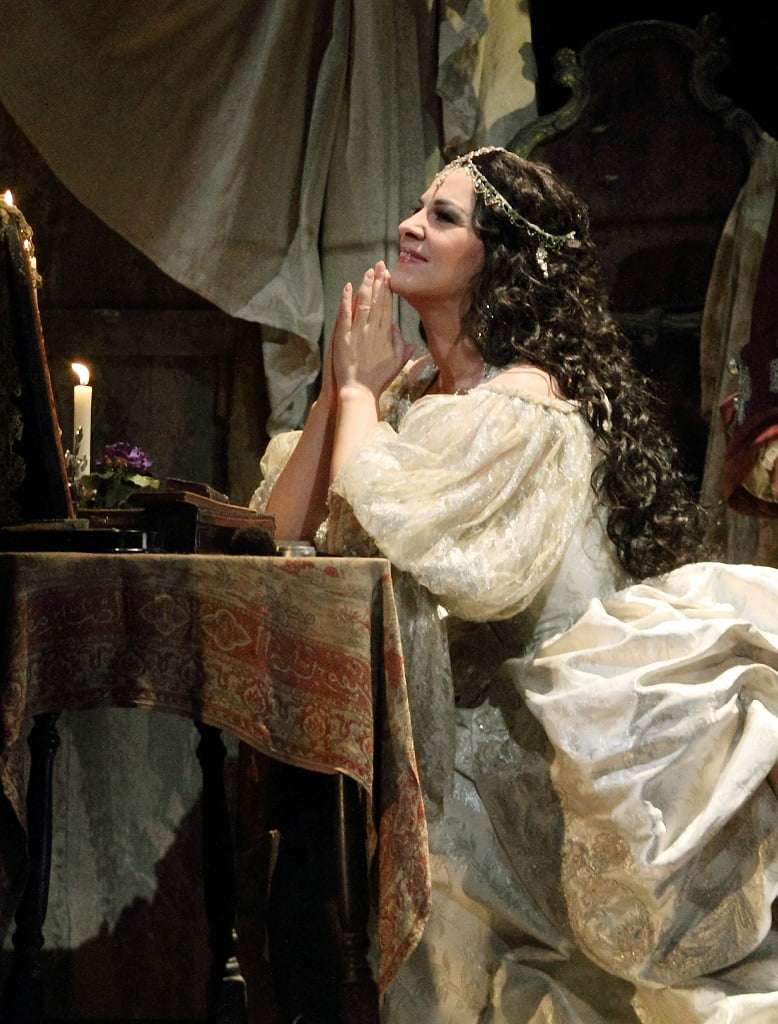 McVicar’s production, with magnificent and detailed sets designed by Charles Edwards and with equally fine costumes by Brigitte Reiffenstuel, is dominated by the stage of the Comédie Française around 1730 (the year the 38-year-old actress perished), which we see from various backstage angles while a play is or is about to be underway, until the crucial Act Three, when the stage is presented full-on for Lecouvreur’s celebrity recitation (based on fact) which leads to her fateful confrontation with her rival.

The theatre-within-a theatre and the theatre as a paradigm for life may be a blindingly obvious concept, but the staging does make them both a meditation and a witty, vivacious background for all those humble (!) servants of dramatic art, both of which Cilea’s music ennobles and comments on with considerable skill – his use of music while Adriana is performing in Act One and then her Act Three recitation morphing into music are both strong cases in point. The Act Three ballet, The Judgment of Paris, is gently Gothed-up baroque pastiche and very entertaining, the dancers returning at the end of the opera in the only overtly directorial gesture to mourn Adriana.

The opera has gathered a reputation for being a vehicle for a star soprano towards the end of her career, and it certainly presents no great challenges of high notes, technique or stamina. Gheorghiu is far from that stage, but her stardom is not in doubt, even though our first encounter with her has an element of Muppet-show send-up – the diva is wheeled unseen to the stage from her dressing-room, then revealed putting on make-up and dressing up right. I have a memory in the original run of her not singing out initially and generally husbanding her resources. This time she was sounding much more full-voiced, and with more definition to her lower register. She also had her signature vocal flutter more under control as an expressive tool rather than an over-played mannerism, and her first aria ‘Io son l’umile ancella’ (I am the humble servant of the creative spirit) had the sort of hush that filled the opera house. Later, though, she soared in Act Four in probably some of the most abandoned, genuinely dramatic singing I have heard from her, when Lecouvreur thinks Maurizio has left her and takes a big fatal sniff of the deadly violets. 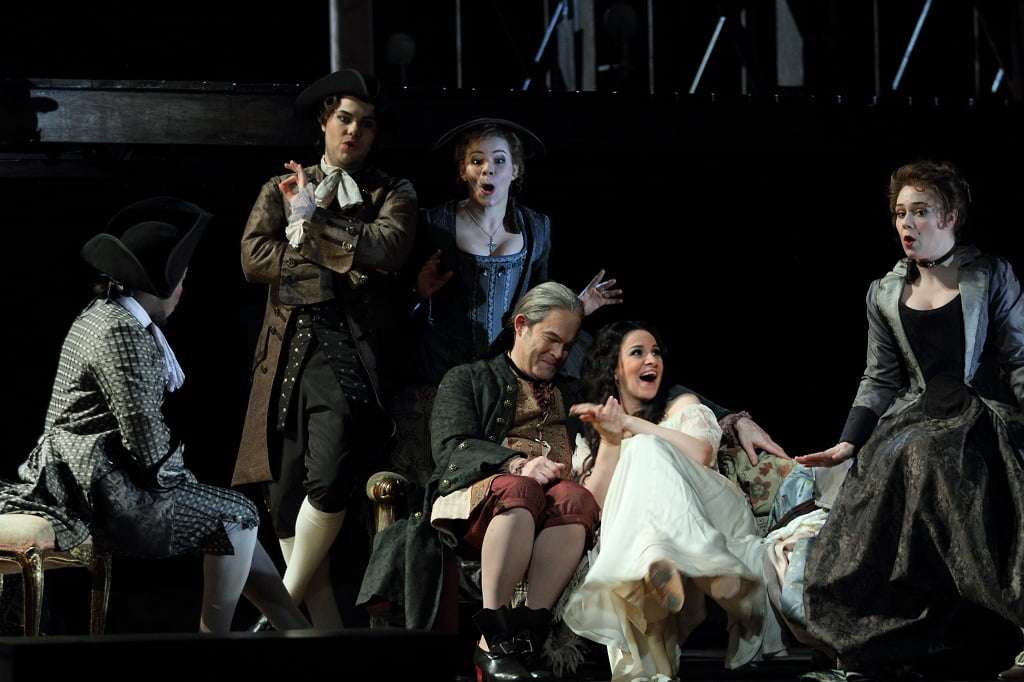 Maurizio is the American tenor Brian Jagde. His voice has all the Italian virility you could wish for, with heroic size and glamour. He tends to end climactic phrases with a big crescendo, an un-nuanced tic for an un-nuanced love-rat, but in context it didn’t matter because he made such a thrilling sound. The other man in her life is the stage-manager Michonnet, pathetically in love with Adriana, and sung very beautifully and acted with insight by Gerald Finley.

Adriana has a rival worthy of her in the formidable Russian mezzo Ksenia Dudnikova as the Princesse, making her Royal Opera debut. She was sensational – her voice is strong, with an evenness of texture and range of colour and drama of stupendous quality, with imperious good looks to match. Anyone on the receiving end of her splendid and corrosive disdain and withering hauteur has good reason to be very afraid. What a star.

In the smaller roles, Bálint Szabó and Krystian Adam were suitably duplicitous as the Prince de Bouillon and the Abbé de Chazeuil. Daniel Oren went for the score’s drama, continuity and colour and didn’t groom it to sound suave and sophisticated. It felt exactly right and ensured that this long evening with nearly an hour of interval flashed by.