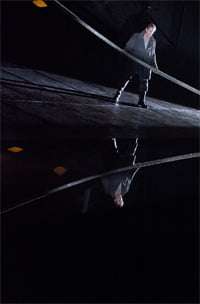 There is an inspired moment early-on in Tim Albery’s 2009 production of Wagner’s youthful opera (given in its single act version), here receiving its first revival. John Tessier’s finely sung Steersman finishes his Lied “Mir Gewitter und Sturm aus fernem Meer” (In thunder and storm from the distant sea) and falls asleep on the deck. Gradually a gigantic shadow creeps across the stage from left to right, sucking light and life as it goes: the Dutchman’s ghost ship has moored alongside, unseen, and the world turns black as Acheron. Sad to say, this virtuoso lighting effect by David Finn is the only visual felicity in the entire evening that measures up to Wagner’s romantic vision. For the rest, Albery’s Leitmotif is ugliness. There is no beauty to be found anywhere in this production: Michael Levine’s set is a drab evocation of a seagoing tanker, Senta is a dowdy seamstress, Erik is a weak bruiser and the Dutchman himself is a presence without presence.

The singers are not to blame for such visual parsimony; it’s all of a piece with Albery’s chosen mood. He presents Senta’s idealised fantasy of the Dutchman as a means of escape from her long hours of drudgery in a sweatshop, but in doing so he seems to forget that this is a fairytale and that someday her prince will come. The tale of a mariner condemned forever to sail the seven seas aboard his supernatural ship until he finds true love is the stuff of Grimm, not grime. When a director rejects the composer’s intentions he ought at least to have something of his own to offer in their place, but this concept lacks inner logic. For the man who masterminded ENO’s classic Billy Budd to be floored by another sea-faring epic is a puzzle; but burdened by passionless encounters among his principals and random ‘eighties costumes among his extras, Albery’s version of The Flying Dutchman is creatively landlocked.

Jeffery Tate, too long absent from these shores, drops rare anchor at the Royal Opera House to conduct this revival before, one assumes, setting sail for a further septennium. After a firecracker start to the Overture his reading relaxed into a lovingly shaped but low-voltage account that paid its dues more to Albery’s limp vision than to Wagner’s coruscating score. The Orchestra played well for him, and the extended Royal Opera Chorus was outstanding, but only occasionally did Tate’s Dutchman fly. 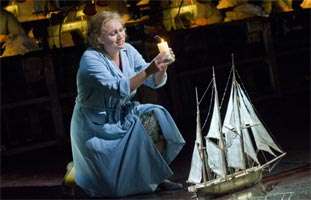 In his opening scene, Egils Silins (a late replacement for the advertised Falk Struckmann) sang without bloom and had to scratch around for the low notes; while Stephen Milling, partnering him as Senta’s father, out-sang him. It did not help that the two singers’ voices are strikingly alike, which made for a dramatic mismatch; but it meant that only through his eerie stillness did Silins command the stage. Things did improve, however, and by the time he shared his great duet with Anja Kampe’s Senta he was able to project with far greater technical comfort and character.

As Erik, Senta’s jealous suitor, Enrick Wottrick was cursed with an off-night. For some reason, in the opera’s final sequence his voice became so tense that a vocal mishap felt inevitable long before it occurred. This was all the more unfortunate because in other respects Wottrick’s interpretation was among the more vibrant contributions. Kampe, for her part, was magnificent throughout. Her idiomatic performance trumped Albery’s drab ideas to create power and passion in spite of, rather than because of, the production. With rock-solid high notes and formidable breath control allied to a tone that remains beautiful under pressure, this was music-making at its surest and purest. Kampe already sings a lot of Wagner (she must be a marvellous Kundry), but it’s striking that as yet she lists so little Janáček in her repertoire. Such a thrilling dramatic soprano should put that right as soon as possible; Emilia Marty awaits, and that old girl isn’t getting any younger.