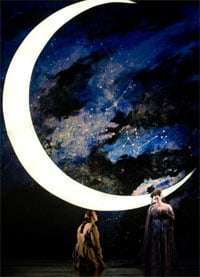 The return of David McVicar’s florid staging of “Die Zauberflöte” (The Magic Flute) is a happy event; not least for the spontaneity and fluidity that revival director Lee Blakeley brings to his re-creation. Blakeley is blest with a watertight cast, many in roles they know inside out and one that includes a refreshingly high proportion of home-grown talent. There is a palpable sense of joy in the air and it permeates the audience right from the opening chords of the Overture, as sunlit globes are paraded through the auditorium like ritualised offerings to ward off the dark.

These fiery oes of light help to deflect attention from an Overture that Sir Colin Davis conducts with a stick of lead, for the maestro takes a stately view of Mozart’s jolliest stage-work, and it’s one that takes a bit of getting used to in this era of low-carb performing practices. On opening night a number of singers struggled with the tempos until at several points in Act One stage and pit fell out of synch with one another. Matters gradually improved as everyone’s ears became more attuned to Sir Colin’s unfashionable if ultimately compelling interpretation. 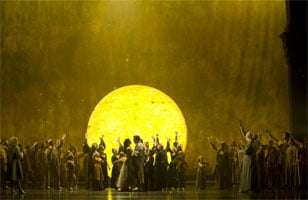 The ROH Orchestra and Chorus provided a rich panoply within which all the soloists shone brightly. To take a cue from Schikaneder’s libretto, the vocal journey begins with the dark tones of Franz-Josef Selig’s commanding Sarastro – a role he has made his own for more than two decades – and ascends to the stratosphere of Jessica Pratt’s secure if not quite transcendent Queen of the Night. In between there are all shades of vocal delight, not least from Christopher Maltman who combines zaniness and pathos as a warmly sympathetic Papageno. As Monostatos, Peter Hoare brings vestiges of his unforgettable Sharikov from “A Dog’s Heart” (ENO) to depict the rottenness within, especially in his Act Two aria ‘Alles fühlt der Liebe Freuden’ (with its redolent line “Ist mir denn kein Herz gegeben?” – Have I no heart, then?) and in his fruitily physical stage presence. Joseph Kaiser is an eloquent Tamino, sincere and well sung, though a little foursquare in his response to the hero’s emotional challenges.

The three Ladies who rescue Tamino from the clutches of an enormous mechanical serpent are vividly characterised by Elisabeth Meister, Kai Rüütel and Gaynor Keeble, their every appearance a welcome intervention, and they are matched by a fine trio of boys (triple cast) who, initially charged with guiding Tamino on behalf of the Queen of the Night, turn so mysteriously to the ‘dark side’ when Mozart upends our notions of good guys and bad guys. There’s an extrovert Papagena from Anna Devin and an outstanding Pamina from Kate Royal, surely today’s leading British Mozart heroine. In Act Two, Royal’s byplay with Maltman’s Papageno is as delightful as her heart-rending delivery of ‘Ach, ich fuhl’s’ is unforgettable.

David McVicar and his design team have created one of the most durable Mozart productions in the repertory: a popular triumph that has many more revivals left in it. It manages to be at once traditional and groundbreaking, prompting the imagination through mime, dance and puppetry amid John MacFarlane’s solidly representational settings. “Die Zauberflöte” is a lucky opera in London: it sparkles both in this and in Nicholas Hytner’s ageless ENO production. McVicar has the edge in visual opulence, though, and none of it is superfluous: the visual references to the Enlightenment are as valid for their arresting beauty as they are for their philosophical content, and we may respond to them at any level we choose. Me, I liked the puppets.