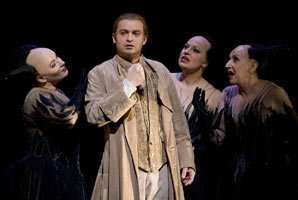 David McVicar’s staging of Mozart’s penultimate opera is a curious affair. Having seen this production a number of times it seems less like the initial ‘hit’ one thought it was, though it is enjoyable on its own terms for it does not run roughshod over the story or caricature characters that are all too easy to send up; the exception to that is Papagena. McVicar plays down the slapstick of the comic turns, which results in other aspects being bewilderingly odd, such as Papagena’s vulgarity. Her disguised appearance to Papageno in his Act Two ‘trial’ is meant to repulse him thus revealing that his profession of love is from his heart. 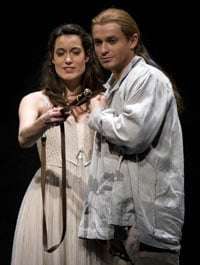 English National Opera’s has recently retired (permanently?) of Nicholas Hytner’s wonderful staging of “The Magic Flute”. Hytner’s was faithful to settings and revelled in the pantomime aspects that the character of Papageno provides. Simon Keenlyside, a great interpreter of this role, and part of Cast A of the current Royal Opera run, is on record for dismissing suggestions that “Die Zauberflöte” is part-pantomime, but it should be remembered that the opera was written for popular consumption. Austro-German opera collapsed after Mozart’s “Die Entführung” and Emperor Joseph II reinstated Italian opera at Court, but the Viennese locals wanted to support popular musical entertainment in their own language. Marinelli, a rival of Schikaneder, had been successful with comic-operas and so the latter decided to beat Marinelli at his own trade, discovering success with ‘Singspiel’ and finding that operas on Oriental subjects and Romantic fairy-tales were what drew the largest audiences. The meeting of Mozart and Schikaneder was easy enough: Mozart’s sister-in-law was in the latter’s company and Schikaneder and Mozart were both Freemasons. 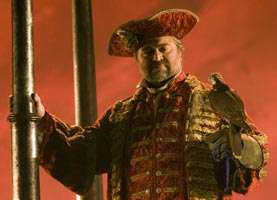 Making his debut for Royal Opera House is the German bass Hans-Peter König. His is a magnificent portrayal of Sarastro, full of restrained, natural authority, which raises the opera above the trivia and naiveties that it contains, bringing out its rich and fulfilling facets. Quite disappointing was Anna-Kristiina Kaappola’s Queen of the Night, a fiendishly difficult role. This is a role that she has sung many times – most recently at the Met – and maybe she was under the weather, though the anguish she felt for her lost daughter was well captured.

The evening benefited from Robert Lloyd’s imperious bass as Speaker of the Temple. The Slovak tenor Pavol Breslik was tender throughout, ideally contrasting with Papageno’s mania. He would look out of place if the director had him do anything but wander – and so worked well here; the ‘trials’ generally involve him not doing something, like speaking. 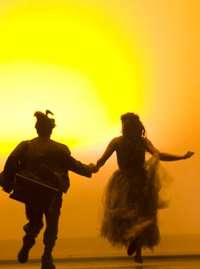 Simon Keenlyside’s Papageno is an athletic performance and Christopher Maltman throws himself about, too. Dashing all over the place he was still able to offer a lyrical and heartfelt entrée to Pamina (‘Bei männern…’) and this duet was a highlight. Kate Royal’s Pamina was touching, attractive and very well sung. The heartbreak she feels when Tamino will not speak to her was captured perfectly. Her reunification with Tamino is a moment to convince that “Die Zauberflöte” is the most moving of Mozart’s works.

The uplifting sense of rejoicing that closes the opera was utterly botched on this occasion as the sun that is set in the Temple failed to light! What looked like a giant blue-cheese was rolled-on as Sarastro sang ‘Die Strahlen der Sonne vertreiben die Nacht’ (The Sun’s golden splendour now sunders the night’). The solar-eclipse must have left newcomers to the opera bewildered!

The music was played with great sympathy by the Orchestra of the Royal Opera House and ably conducted by Roland Böer. The first act ticked along, full of requisite drama. Solemn chords begin the overture but the rest was dashed off with panache and the integration between singers and orchestra never faltered. Sprightliness and an evident enjoyment of the score could be sensed throughout as well as the ability to switch to more exultant and elevated ideals. All in all this is a great night out.