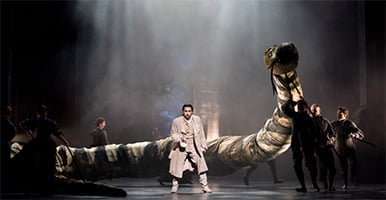 Die Zauberflöte (The Magic Flute), Mozart’s great homage to freemasonry, is a strange piece of theatre. The libretto is set firmly within the Austrian popular tradition, from the arc of the plot – a valiant prince sent by a queen on a quest to save her daughter – to the black-and-white contrast of noble prince Tamino and low-born, comically crude, Papageno. To our eyes and ears, Die Zauberflöte can veer uncomfortably between pantomime and drama. The holes in the plot are well known (the three boys, sent by the malevolent Queen of the Night, are later a symbol of good apparently at the command of High Priest Sarastro) and do not help to overcome the barriers time has created between Enlightenment moralising, the freemason’s code of honour and our cynical age. While the prominence Mozart and Schikaneder gave to the holy number three is obvious – three Ladies, boys, and the three flats in the key signature (E flat) – the piety of the opera is harder to convey. The challenge to the director, given the unwieldy nature of the story, is to glue things together. 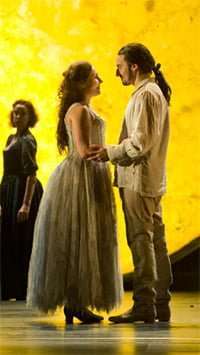 The Royal Opera has revived David McVicar’s 2003 production several times, quite often under Sir Colin Davis, who also conducted the first run. Now, the current revival is dedicated to its former Music Director, who died two days ago, and whose fifteen-year tenure (1971-86) was crucial to the survival and continued strengths of the house. Antonio Pappano prefaced the performance with some well-chosen words to remember his predecessor. Julia Jones then conducted a performance that could hardly be criticised musically. The ROH Orchestra was lively, sensitive and warm.

The cast was uniformly excellent. Albina Shagimuratova as the bejewelled Queen of the Night elided some of her semiquavers but was winning with her rich, sparkling singing. Christopher Maltman was a lovable teddy-bear as Papageno and performed his silly, folksong-derived music as though it were Schumann Lieder. Ensembles were responsive and musically intelligent. Mozart was at the height of his ability when he composed Die Zauberflöte and this is nowhere more obvious than in the subtly shifting duets and trios. Pamina is the more youthful and energetic character, leading the musical conversation to new keys. Brindley Sherratt’s Sarastro remained still and serene even with Ekaterina Siurina’s silken-voiced Pamina fluttering around him. Tamino is changeable in mood, swayed by his love for Pamina, his sense of duty and honour, and reverence for the Temple. Charles Castronovo lacked pliancy in the first Act but made up for it in the second. 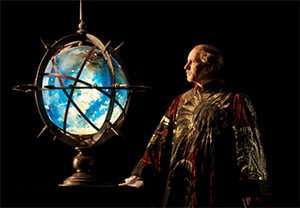 The consistency of the cast is at odds with McVicar’s production, as revived by Leah Hausman, which is uneven. He is a master of the tableau, of neat shapes and of clean movements. He is able to bring elegance and clarity to an opera. This production is set in the eighteenth-century, with faded frockcoats and dusted wigs given a modern, distressed look, something between Miss Havisham and gothic rock. One glorious scene is in the form of a painting with two children seated at a vast table before a spinning, hypnotising model of the solar system. Another finds the three Boys seated at the foot of a huge sash window, as though hiding in a stately country house. The setting is helpful in making sense of the Enlightenment-inspired libretto. John Macfarlane’s designs infuse the night sky with magma and glitter, and the opera closes spectacularly and yet simply, beneath a huge glowing parchment sun.

At other times, the action is confused. Papagena’s anachronistically cheap, tight skirt is completely out of place. Enormous marble columns dominate the stage, slide around noisily and are a distraction, and the minimal staging, however enchanting can leave bareness. The challenges inherent in the libretto are huge and this production asks more questions than it is able to answer. The plot’s awkward twists and turns, the great jumps from comedy to poignancy, and the stiff moralising passages all serve to disrupt the evening’s magic, which is though musically strong, often visually arresting, if not quite a coherent whole.