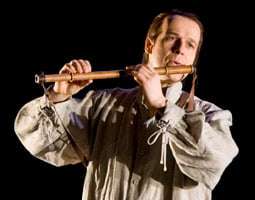 This, the third revival of David McVicar’s 2003 production of “Die Zauberflöte”, returns to Covent Garden for twelve performances with two casts. With Cast A, several performers stand out. They are Christoph Strehl as Tamino and Simon Keenlyside as Papageno. Their opposite numbers are equally strong, in Genia Kühmeier’s excellent reading of Pamina and Kishani Jayasinghe’s deliciously tarty Papagena (the latter is in both casts).

Strehl is making his Royal Opera debut and a very auspicious one it is, too. The German tenor makes Tamino a very serious fellow and he has the voice to support the role. There is power in spades for this character’s journey through the initiation rituals of fire, water, air and earth in order to overcome the fear of death. Strehl is blessed with a beautiful voice capable of evoking varying shades of emotion. Having mostly heard the opera sung in English, it is good to hear it again in the original German, which here seems more expressive than ever. The Pamina of Kühmeier is also extremely well sung and acted. 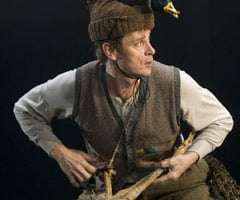 Simon Keenlyside has made Papageno one of his signature roles, taking it to La Scala, Metropolitan Opera, Paris, Vienna and Salzburg. Without tipping over the edge into downright farce, he does a sort of Marx Brothers job on the role, making it zany and yet almost believable. I don’t recall ever seeing such a physical performance of the role as he rushes around, leaping all over the shop, bouncing here, bounding there and in between picking his nose or spitting. It is a truly comedic performance.

“The Magic Flute” can be an odd mixture of ritual and fun that do not necessarily meld together satisfactorily. David McVicar’s production (here revived by Lee Blakeley) combines both elements into a seamless staging that delights from start to finish. 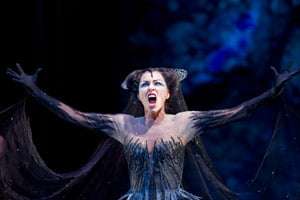 Other joys are to be found in Erika Miklósa’s effortless performance of the Queen of the Night’s aria, Anna Leese, Liora Grodnikaite and Gaynor Keble as the Three Ladies, and Andrew Mott, Nick Hampson and Thomas Pinsker as the Three Boys. Good work too comes from Stephen Milling as Sarastro, John Graham-Hall as Monostatos and Thomas Allen as the Speaker of the Temple. After a sluggish overture, Roland Böer keeps tempos on the move.

Apart from the vocal felicities, John Macfarlane’s designs and Paule Constable’s lighting add much to the success of the production, from the fearsome, giant serpent at the beginning, which looks like ‘Nessie’ has come home, through the star-laden designs, to the walking and pecking bird that Papageno chases like a demented Harpo Marx, and the dreadlocked Darth Vader-like characters who are the Men in Armour.

This staging just cries out to be enjoyed. It is certainly a palpable hit.