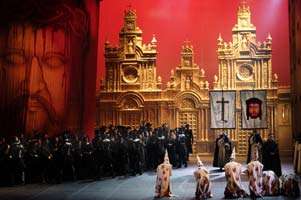 This new production of Verdi’s 1886 Modena version of “Don Carlo” restores an Italian version of the work to The Royal Opera’s repertoire after an interval of almost 20 years. If this premiere had slightly tense moments that may be partly because memories of the justly famous Visconti production in which the last Italian revival was mounted still linger in the memory of many seasoned opera-goers. Bob Crowley’s bold and atmospheric designs actually seem to nod back to the older production depictions in their use of perspective certainly in the settings of San Yuste and in the garden scene of Act Three. With Mark Henderson’s brilliant lighting the blue-white coldness of the Fontainbleau forest, the sultry heat of day in the garden in which the ladies relax in Act Three, and the garish quality of the auto-da-fé scene contrast well with the oppressive darkness of the settings where politics and religion are governed. The scenic transitions were particularly well handled – with a small-windowed black wall frequently descending like a portcullis to suppress the light and colour and impose gloom. 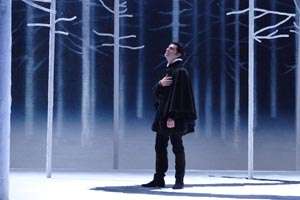 The designs find their musical counterpoint in an extremely fine account of the score from Antonio Pappano and the ROH Orchestra. Always singer-sensitive, Pappano allows the composer’s very distinctive moods and colours to emerge afresh, not least by notably bringing the lower woodwind and strings slightly to the fore in the orchestral mix thereby capturing their brooding qualities. The cellos brought a chill at the start of the study scene and, when inter-playing with the sonorous trombones at the start of the final act, great poignancy. Elsewhere Pappano’s approach made one sit up and register details and subtleties. The interpretation is on the fleet side, matching the urgency of the drama, and if one occasionally wanted slightly more expansive tempos in some of the slower arias these thoughts were fleeting. The only real miscalculation is allowing the hectoring Inquisitor demanding the recantations from his victims and whipping up the crowd into such a noisy frenzy that one could not hear the rather beautiful theme the orchestra plays at that moment. 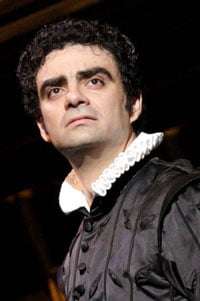 There was also a huge amount to enjoy from the stellar cast. There had been much publicity centred on the return to the stage of Rolando Villazón, following a period of retrenchment. Unlike many singers of the title role he did manage to remain the centre of attention, aided by the direction which concentrates heavily on the prince and makes him strongly catalytic to the events of the drama. Much of Villazón’s singing was excellent – full of tonal variety, subtle control of dynamic, and very impassioned. Once or twice there was a perception that tension or his nerves were getting the better of him – but in many ways this rather suits the character. His acting was good – his sense of surprise when Elizabeth stated she loved him, as if he could scarcely believe something was going right in his world for once. He looks the part of course. One hopes he will fully recapture the naturalness in performance that he had when he first burst on the scene. 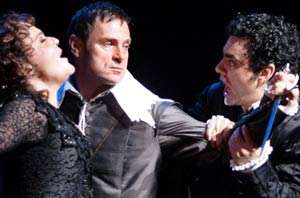 Opposite him the visionary and optimistic Rodrigo of Simon Keenlyside made a huge impression. It is almost pointless to say that he sang the part well with beautiful tone, wonderful phrasing and with a keen sense of drama. This Rodrigo is perhaps more single-minded than some and one sensed in Keenlyside’s portrayal a dedication to the situation in Flanders was almost all-consuming and drives his every action – much as it does in the play. Here Nicholas Hytner’s association with productions of the Schiller original brought dividends as it did elsewhere in the piece – indeed he allows the complex twists and turns of the plot to be told with simplicity and point and in many respects more theatrically than operatically – and very true to both Verdi and Schiller. 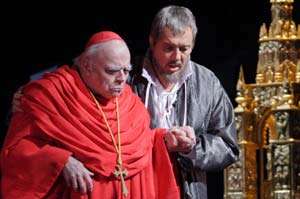 There is a fantastic line-up of basses too. Ferruccio Furlanetto’s solid, resonant and oaken voice is just perfect for King Philip II, and his long experience makes him an impressive exponent of the role. His almost murmured start to ‘Ella giammai m’amò’ and his use of almost hollow tone made the king’s personal emptiness very real, and he manages the contrast between the private man and the public figure very astutely. His church adversary, the Grand Inquisitor, was such with chilling, cavernous and ashen tone from Eric Halfvarson, and as usual their debate was one of the great moments of the opera. It is luxury, too, to have the immediately identifiable tones of Robert Lloyd, also a Philip II of distinction, as the enigmatic monk who is Charles V.

As Elizabeth, Marina Poplavskaya turned in a very fine performance, charting the change of her character from a carefree princess to circumspect yet unhappy queen most affectingly. The middle part of her voice is extremely beautiful and she also has power in the lower reaches of her range, which is essential for the more declamatory passages of the role. Her rendition of the difficult ‘Tu che le vanità’ was full of nuance and great vocalism. What is missing perhaps is a sense of vulnerability that others have brought to the part, but nonetheless this is one of her finest assumptions to date for Royal Opera.

On paper the casting of Sonia Ganassi as Princess Eboli was interesting, given that her career to date has been rather focussed on Rossini and some of the major bel canto mezzo roles, although she has sung Eboli elsewhere. That she has the technique for the treacherous ‘Veil song’ was no surprise, but she also had the power for the trio in the garden and she caught the sweep of ‘O Don fatale’. She’s not one of those thunderous mezzos that are often assigned the role; rather, she is a rather more subtle interpreter, but at moments one felt concern that she might be pushing her rather beautiful voice to its limits and possibly beyond.

The smaller roles are cast from strength. There was a mellifluous sextet of Flemish deputies, a radiant Voice from Heaven from Anita Watson, and a likeable and boyish Tebaldo from Pumeza Matshikiza. The augmented chorus was superbly disciplined.

The staging will undoubtedly settle over the run, and hopefully the ghosts from past performances in the Visconti production will smile happily on their successors.