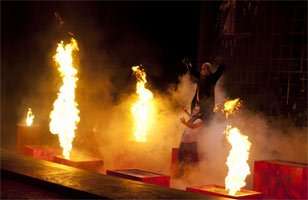 This is the fourth revival of Francesca Zambello’s lumbering production (first seen in 2002) of Don Giovanni, and it is still showing no signs of lift-off. It’s always been a notoriously tough nut to crack, but this staging almost wilfully shoots itself in the foot. The reversible, revolving set isolates each scene and its characters to the detriment of flow. Zambello is more fond of the big gesture – plumes of flame, the huge Terminator-like hand of Fate, the totemic emblems of Zerlina and Masetto’s hard-won connubial bliss set on fire to light the path of vengeance – than she is in the more straightforward business of cast direction, here revived (again) by Duncan MacFarland.

The other big design element is a statue of the Virgin Mary, set unattainably high on the wall of the set, which sends out confusing signals of Catholic guilt and retribution, and, rather clumsily, acts as a sort of rallying point for Anna, Elvira and Zerlina in a half-baked concept of empowered sisterhood.

The one big gesture that Mozart and Da Ponte endowed with such potential is the final scene with the statue of the Commendatore (Donna Anna’s murdered by Don Giovanni), which is woefully let down by the feebly non-supernatural staging. 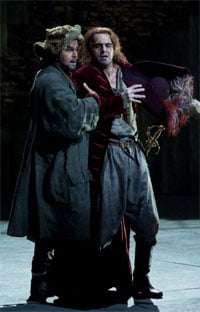 With all the cast, except Gerald Finley, making a debut of one sort or another, and with MacFarland going along with Zambello’s broad-brush direction, the opera’s subversive wit and moments of high tragedy didn’t get much of a look-in. The Don’s and Leporello’s disguise-scene with Elvira was laboured and coarse, Elvira herself was too central-casting deranged to be at all convincing and the touching chemistry between Masetto and Zerlina took a while to combust.

This wouldn’t have been so noticeable had the Don-Leporello duo been more dynamic. Finley was in typically fine, seductive voice, and, in a production that has fielded some visceral, feral, sex-addict Dons, had a good line in sheer physical menace. But Lorenzo Regazzo didn’t quite connect with the double-act, so there wasn’t much of a spark to their double-edged dependence. Regazzo’s singing was fine, if a bit stolid, in the ‘Catalogue’ aria, but their relationship in general needs more focus and energy.

Hibla Gerzmava made Donna Anna’s realisation that Don Giovanni is her father’s killer and the ensuing description of his attempted rape of her dramatically and technically one of the highpoints of the evening, climaxing with a thrilling ’Or sai chi l’onore’; and Matthew Polenzani as Don Ottavio responded with an impressive ‘Dalla sua pace’, the reprise delivered in a spellbinding, flirting-with-danger pianissimo – and there was an equally fine ‘Il mio tesoro’.

Despite misgivings about the way she was directed, Katarina Karnéus gave Elvira’s music a trumpet-like clarity, although, perhaps because of the physicality of what’s required of her, she seemed to be flagging in ’Mi tradi’. Irini Kyriakidou had got into her very attractive stride by the time of ‘Batti, batti’, and Adam Plachetka’s Masetto was endearingly characterised and solidly sung throughout.

There was no lack of good singing, but not helped by some variable conducting. On the strength of the recent Carmen for The Royal Opera, much was expected of the Greek conductor Constantinos Carydis. What we got, though, were some bumpy extremes of tempo that ranged from leaden slow to ensemble-breaking and breath-jeopardising fast. The seed was sown in the Overture, which opened with some startlingly fresh, immediate orchestral colour but then began skating precariously over detail in the (too) fast section. With that and the staging, flow, musical or dramatic, didn’t stand much of a chance.