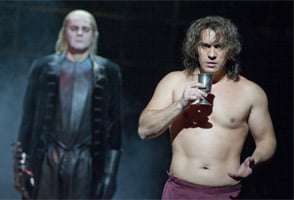 Emotions ran high as Cast B took to the stage for the first time in this year’s continuing revival of Francesca Zambello’s 2002 production of Mozart’s Don Giovanni, part of The Royal Opera’s “Da Ponte cycle” alongside Jonathan Miller’s Così fan tutte and David McVicar’s Le nozze di Figaro. Whether these sentiments were commonly shared, though, and indeed whether they were always appropriate, is another matter. Hence I should set down at the outset that on one of the most depressing evenings of my opera-going life large sections of the audience roared their approval and cheered to the echo.

After the blandness of the January revival, which boasted a fine Don from Gerald Finley if a less-inspiring supporting cast, Bárbara Lluch assumes the directorial reins for this Erwin Schrott-led second sitting. In so doing she takes the production to a different world: from the generalised to the ultra-specific, from the earnest to the overplayed – and, catastrophically, from the respectful to the self-indulgent. Neither extreme is acceptable, but the damage perpetrated to Mozart’s opera by Lluch’s approach is shocking.

Alex Esposito, a fine, resonant baritone, is encouraged (or indulged) to play Leporello like Baldrick on speed: a gurning, graceless fool without a trace of true humanity. His ‘catalogue’ aria (given lumbering treatment by Constantinos Carydis) is straight out of the circus. How is Ruxandra Donose (as Donna Elvira) supposed to react when her character is subjected to the kind of personal ridicule the Marx Brothers used to reserve for Margaret Dumont? The litany of her loved-one’s conquests may be comic, but it must also accommodate the poor woman’s silent distress. There was no chance of that here. 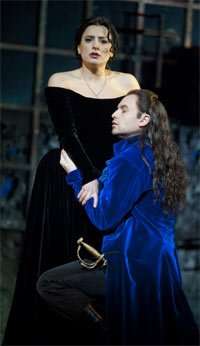 At the start of Act Two, Esposito was joined in his excessive clowning by Erwin Schrott. During the ‘Cyrano de Bergerac’ identity-swap scene, where he and Leporello change clothes in order to trick Donna Anna, the slapstick was laid on not with a trowel but with a mechanical digger. Schrott even broke the fourth wall in order to flirt with someone in the stalls circle (something the lighting people had clearly not bargained for, since his ad lib gesture was lost in the shadows). It was desperate stuff that pandered to the lowest common denominator. The Uruguayan bass-baritone’s performance never recovered its dignity thereafter. Schrott is a fine Mozart singer and an artist I greatly admire, but on this occasion he sold his soul to the devil in more ways than one.

The blame for this farrago rests squarely with Lluch. She is guilty of sloppy direction, the worst moment of which occured when Schrott sang his champagne aria, ‘Fin ch’han dal vino’, with half his head tucked under an overhanging step; but her worst offence is against Mozart and Da Ponte. She treats the Don and his manservant as a comedy double-act: a sort of two-headed Arlecchino in a half-baked Commedia dell’Arte farce where everyone else is a cypher whose sole purpose is to service the clowns.

Carydis, the only constant between the two casts, has grown more comfortable with the score over the past few weeks. He cradled Donna Anna’s ‘Non mi dir’ (a high point in Carmela Remigio’s shrill yet sympathetic interpretation) with exemplary attention. However, he still over-conducted, pumping his baton furiously instead of allowing Mozart’s liquid score to flow organically. The ever-attentive Orchestra of the Royal Opera.House did as it was asked, but it’s hard to believe this is the same band that is currently playing so glowingly under Antonio Pappano for Le nozze di Figaro. 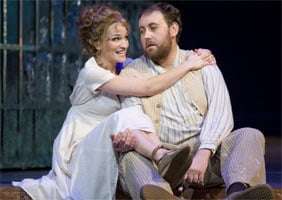 There was solid work from Matthew Rose (a suitably burly, stentorian Masetto) and the impressive Pavol Breslik (a most sympathetic Don Ottavio), together with an authoritative Commendatore from Reinhard Hagen. Perhaps Kate Lindsey overdid Zerlina’s coquettishness, but she is an attractive, lively singer whose duet with Don Giovanni, ‘Là ci darem la mano’, was vividly sketched as a seduction in miniature. However, Donose, despite her engaging presence in Act One, came a cropper like so many before her in her difficult climactic aria, ‘Mi tradi’.

It’s a sure sign that a show is on its last legs when the cast feels free to run riot. Not that Zambello’s was ever much of a Don Giovanni. Ironically, whether or not the singers were aware of it, their distortion of her intentions damns the production far more eloquently than I ever could. A concept built on integrity and depth would simply not lend itself to such subversion. This revival refuses to trust either the director or Mozart, and I fervently hope there’s still time for a honcho to bash heads together before the rest of the run.