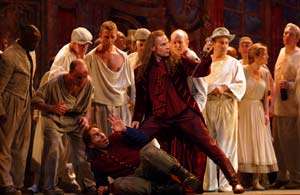 To attract this “new” audience, advertisements were placed in “The Sun” newspaper inviting applications to a ballot for up to four highly-discounted tickets: a top price of £30.00 instead of £195.00. There was also a glass of “sparkling wine” for every ticket holder. Wandering through the House I spotted many people carrying newspapers but none were “The Sun”! Many even admitted to me as to never having read the “trashy Sun” except for the one occasion to get hold of these tickets. Attracting new audience members is to be applauded. But, to exclude from the Opening Night the many that pay lots of money to this institution that we love and care dearly about is an utter disgrace. 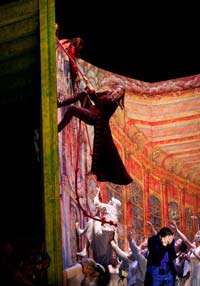 Tony Hall’s ‘aim’ is this: “to get that buzzy cool crowd to come in”. To have a man of his age use these words is, frankly, embarrassing. It is also flawed. The Royal Opera should not be seeking out a specific audience; handing out cheap or free tickets for performances to people that do not appreciate the Art wastes everyone’s time. Quite a few left at ‘half time’ on this particular evening. Many claim that the tickets for opera are expensive. Some are, but a great many are less than £50.00. How much does it cost to see a Premier League football match?

To the opera itself. Magnificent playing and some superb singing were once again let down by this most dreary production. It is plain boring and wholly unsupportive of the story and drama: it should have been retired after its first outing. The set consists of a curved rotating wall with an image of the Virgin Mary on one side. Some characters wander up and down the side and across the top. The view afforded the audience at a glancing angle must be dreadful because the viewing 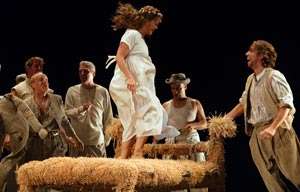 area of the stage is framed, blocking the view of many. The introduction of the Commendatore at is laughable, and people did! Everything about the production seems cheap, perhaps saving money for the gas bill for the pyrotechnics at the end: as Don Giovanni is dragged down to hell, flames roar and most of the stage is ablaze.

One consolation of having a mundane set is that one can concentrate on the music-making and it was here that an energised Sir Charles Mackerras gave the necessary shot in the arm. The overture set a terrific start and the set-piece that is the penultimate scene was rendered with bone-chilling effect. Where necessary the orchestra drove the action along. Never once did Don Giovanni’s endless attempts to seduce falter. Some of the most tender and heartfelt of emotions came out of the pit. 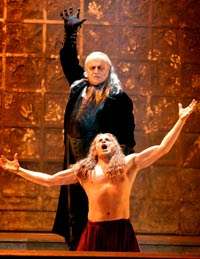 Towering above the drama, figuratively, is the Commendatore, and the voice that Eric Halfvarson boomed made all take note. He was a highlight in the Royal Opera’s recent “Don Carlos” as the Grand Inquisitor and here that same inherent authority pervaded the House. “Don Giovanni, a cenar teco m’invitasti” (Don Giovanni, you invited me) was given an unusual rasping that was wholly appropriate.

Simon Keenlyside led the strong cast. He created the role of Don Giovanni for this production in 2002 and he drew obvious pleasure from his swaggering and lecherous character. What is absent in the characterisation is the idea of Don Giovanni being the ultimate Romantic hero, the person who defies the norms of life’s boundaries. Lorenzo Da Ponte gave the subtitle dramma giocoso, yet here it was definitely opera buffa. 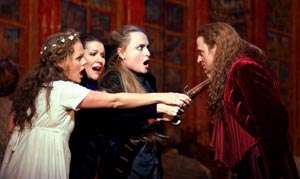 The Don’s defiance at the end did not live up to the words sung. However, the revelry invested in “Fin ch’han dal vino” (Now prepare a great feast) and the conniving of “Metà di voi qua vadano” (Let half of you go this way) found Keenlyside in his deceitful and chauvinistic element.

His comic foil was Kyle Ketelson. Forever at the Don’s elbow, helping his master out of difficult situations, the two together acted so very well and anticipated each other with seeming ease. The supper invitation for the Commendatore’s statue – “O statua gentilissima” (O most noble statue) – was comedic yet tinged with awe, capturing perfectly the unfathomable situation that the duo found themselves in.

Chasing the murderous Don is the Commendatore’s daughter. Her realisation that this man is her father’s murderer allowed Marina Poplavskaya’s demands to her betrothed (Don Ottavio) for vengeance to find powerful expression, with her dramtic soprano being matched by the emotions and words. Elvira, as the demands of this production expect, was a mad obsessive, ranting about Giovanni’s lecherous nature at anyone who would listen to her. This could have made her annoying and so it is to Joyce DiDonato’s musicianship that one could see beyond this. In a similar way, the production also ruined the character of Don Ottavio. He is lifeless here, and this is no fault of Ramón Vargos, whose melting and heroic tenor rose above the ineptness of his character.

As the country bumpkins, Zerlina and her betrothed Masetto were the image of true love. There are tests on the way but in the end their love and trust for each other win out. Robert Gleadow was a little stiff at first but he soon gathered himself and gave a heart-warming portrayal whereas Miah Persson’s innocent study of Zerlina was vivid.

There is a lot of pleasure to be got out of this revival yet one suspects that the staging left a lot of the neophytes in the audience bewildered. A much better opera would have been “La bohème”, particularly in the Royal Opera’s glorious staging!