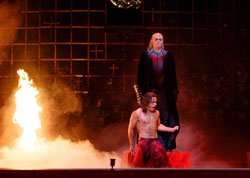 This is the second revival of Francesca Zambello’s 2002 production of “Don Giovanni” and featured the return of the charismatic singer of Leporello in the last revival but this time in the title role. Ana Maria Martinez also returns to reprise her Donna Elvira, whilst the rest of the cast are new to their roles in this house.

On this first night there was much to admire in the singing of all the protagonists, although not all gave the most consistent of portrayals, in part due to the rather unfocussed ideas of the production which, particularly on repeated viewing, increasingly seems not to add up to a coherent and satisfying whole. Yes, “Don Giovanni” is a hard opera to pull off entirely successfully, but this one seems to compensate by falling back on a big pyrotechnic spectacle as Giovanni is dragged to hell towards the end so. The huge fiery hand that swings across the stage at the end of this scene looked even more like a National Lottery “It’s you!” than ever before and caused many around me to laugh. That has to be wrong! The monumental sets are not amongst the late Maria Björnson’s most inspired designs, and drive some of the soloists to sing from atop various walls – from where they are invisible to many of the audience. The little nooks where characters such as Zerlina hide also conceal them from many of the audience. But spectacular singing does provide aural compensations. 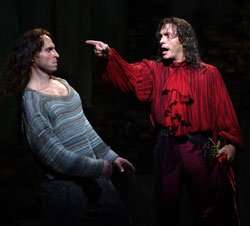 One advantage of the ROH casting is the physical similarity of Erwin Schrott’s Don Giovanni and Kyle Ketelson’s Leporello which means that the their exchange of clothes in Act Two is more likely to dupe the unwitting Donna Elvira had not the stage been bathed in light (she would really have to have been extremely short-sighted not to have realised), but it also added an interesting idea that these two characters are two representations of the same personality. In this production Giovanni is more an aristocratic thug gone seriously off the rails with Leporello his almost hapless, almost equal partner. Schrott oozed both physical and vocal charisma, perhaps rather too knowingly, but certainly held the show together. He sang well, too, although some of his vocal effects seemed a little calculated rather than assuredly spontaneous. The ‘Champagne aria’, sung at a pretty fast tempo was not barked or gasped but surprisingly mellow and the serenade was suitably ardent – even if it seemed to lose momentum towards the end. The recitative was varied and alert to the text but not always so cleanly voiced – it was here that Schrott emphasised the violence of the character. However, in this production his Leporello in 2003 made more of an impact and would seem to be his ‘natural’ role in the opera.

Ketelson’s Leporello made an excellent foil to Schrott. Less obviously comic than some, rather more the butt of the humour, this hapless Leporello was also engagingly sung in a sturdy, warm bass-baritone. That he sounded vocally quite similar to Schrott meant that there was little to differentiate between them aurally which has obvious dramatic advantages if fewer musical ones. He, along with Sarah Fox’s of Zerlina, probably gave the most rounded portrayal dramatically. 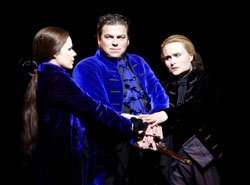 The grander ladies, Donnas Anna and Elvira were both characterfully sung. Ana Maria Martinez as Elvira has to contend with the inane send up of her first entry – she enters standing in an open-topped sedan-chair with a telescope to her eye presumably searching for her lost Giovanni and then being treated as just a rather ditsy young woman on the verge of madness. That she managed to retain any sort of dignity was impressive enough, but she also sang ‘Mi tradi’ with considerable aplomb – it was taken at a vigorous tempo that really worked – and she negotiated the role’s wide compass with ease.

Although scheduled to sing Donna Anna in the final performance of this run Marina Poplavskaya found herself steeping in for an indisposed Anna Netrebko for this and the next performance (which is to have a big-screen relay around the country). She was undoubtedly a little nervous at the start and some of her high notes felt a little cautious during the course of the evening, but it was nevertheless a strong performance. She captured the character’s vacillation well, and sang both of her arias, especially ‘Non mi dir’ rather well. On this occasion a tendency to clip or fade out prematurely at the end of long phrases was noticeable and destroyed her otherwise exemplary sense of line. One hopes this was nerves, and also that this hugely potential singer is not being given too much too soon. 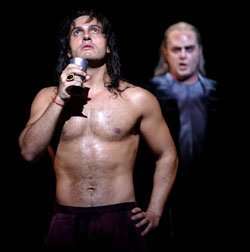 Fox’s Zerlina was cleanly sung in her lovely bright soprano – her light and simple decorations to the musical line being an absolute pleasure to hear. She was very convincing in her interaction with Matthew Rose’s rather forthright and upright Masetto. He sang his part well and, tall as he is, was a credible physical antagonist to Giovanni. That the director asks him to exhibit a somewhat unconvincing violent streak in his treatment of Zerlina and then be rather pathetic when beaten by Giovanni did not help him to give a fully grounded portrayal. Don Ottavio is a frustratingly inert character; yet has two rather wonderful arias. Michael Schade actually managed to evince some sympathy for this rather put-upon man and sang the arias beautifully, shaded with some lovely quiet tones. Reinhard Hagen sang a strong Commendatore, if not ideally cavernous sounding.

The Orchestra under Ivor Bolton was on fine form. The sinewy strings and lean timpani-sound in the brooding opening of the Overture, later matched in the penultimate scene with the arrival of the Commendatore, were fantastic. Also great was the solo cello in ‘Batti, batti o bel Masetto’. The woodwinds were on fine form, chattering away happily through Leporello’s aria and the clarinettist seemed to enjoy ‘Mi tradi’. Paul Wynne Griffiths’s fortepiano continue also is deserving of a mention. Some of Bolton’s tempos were quite speedy but seemed absolutely perfect for the moment, and if there were times when he appeared to leave his singers behind a bit these were few and far between.

So, in summary, and perhaps like most performances of “Don Giovanni”, this was not an entirely successful evening of theatre, but was a mostly satisfying and sometimes educational one from a musical perspective.