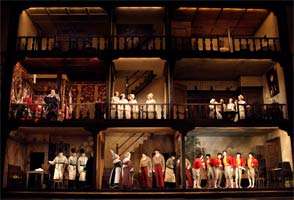 This revival did not start too auspiciously, as the account of the fizzing Overture was not as cohesive as it might have been with a few fluffed entries, a slightly bottom-heavy balance and lack of precision in the various tempo changes, although the low strings promised much in the opening theme which can be seen to paint a picture of Don Pasquale’s predicament. Matters improved thereafter and by the time the comedy was underway the orchestral playing and the conducting of Evelino Pidò began to gel. (The late Sir Charles Mackerras was to have conducted.) The build-up of tension throughout Act Two to its comedic finale was well judged, and the accompaniment to Ernesto’s Act Three garden serenade had all the distinctive colouring that it needs. If the performance seemed to lack airiness and brilliancy then that was perhaps more due to the production rather than the playing.

Is it too ‘dark’ for this light score? Isabella Bywater’s monumental and detailed “doll’s house” set, which is opened by two of Pasquale’s servants as the opera starts is both imposing and confining. It is only in Act Three that the principals manage to escape from it and to move down the stage apron. It does however present the microcosm of the Pasquale household well, and you really get the effects of Norina-in-disguise Sofronia’s arrival once the sham marriage to the old man has been enacted (although if Pasquale was supposed to be quite so miserly would he have all those rooms open at the start?). What it also does is allow the drama to move with pace and without the need for disruptive scene changes. However, a dolls-house needs dolls. Jonathan Miller’s idea to depict and make-up the main characters be doll- or puppet-like does seem to rob them of the humanity that is so much a part and of the piece. None of them are that likeable on their own terms but is their human foibles that should make them lovable. 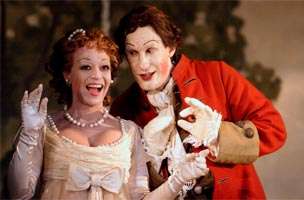 After all, at the start Pasquale is trying to disinherit his nephew, Ernesto can appear to be motivated entirely by his uncle’s money, Norina single-mindedly determined to get the best for herself and the manipulative Malatesta’s motivations decidedly suspect. Portraying them as ‘types’ and diminishing their humanity seems to accentuate these characteristics and therefore to deprive moments of genuine pathos and feeling. One such example is the shock of Norina’s slapping of the old man and the expressions of sentiment and regret that follow it. One wonders if the singers feel as if they have to work doubly hard to engender the audience’s sympathy. Certainly the evening did not have quite the sparkle it should have had.

The bulk of the drama is heavily dependent on the four principals – though Bryan Secombe made much of his legal ‘etceteras’ as the Notary and the members of the small chorus grabbed their opportunity when the servants discuss the hurly-burly that has developed in the house. 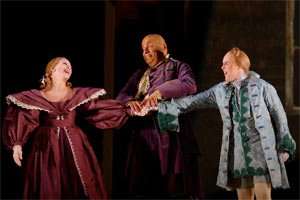 As Don Pasquale, Paolo Gavanelli judged the old-man’s moods unerringly. He caught both the frustration and despair very well, whilst keeping the character’s origins in the Italian buffo tradition well to the fore. His dark and dry vocal colourings add seriousness to the interpretation, too, and yet he can still patter away with panache. He also has very expressive eyes! Jacques Imbrailo’s Doctor Malatesta was also very well sung, in his sappy even baritone, and he interacted well. He brought out the duplicity of the man well, helped by the fact that much of his vocal contributions are in duet or trio. As the young lovers Ernesto and Norina we had Barry Banks and Íride Martínez; she was making her house debut. Banks has all the high notes and fluidity that this role requires, although at moments his tone can be somewhat insistent. An announcement was made before Act Three that he was suffering from an allergy, and perhaps that affected his performance. Certainly there have been more mellifluous accounts of ‘Com’è gentil’ (Raul Gimenez’s singing of it in one of the last revivals of the ROH’s old production still lingers in the memory). It is Ernesto who has the hardest task in catching the audience’s sympathy, and despite his affliction Banks did manage to maintain interest.

Norina is a tricky role. Vocally it requires brightness, technical agility and reserves of power to be unleashed; this lady is ostensibly self-aware and capricious to the point of cruelty. She must also have a heart. Martínez certainly possesses a winning stage personality, and winning and persuasive vocalism. If her opening ‘Quel guardo il cavaliere’ was a little tentative, by the time she reached the duet with Malatesta ‘Pronta io son’ she was well in her stride. Her embellishments in the finale were neat and brilliant. What perhaps is required is just a tad more dynamic variety to really bring the contrast between gaiety and sensitivity and a more reliable trill. Nonetheless, this was a successful ROH debut.