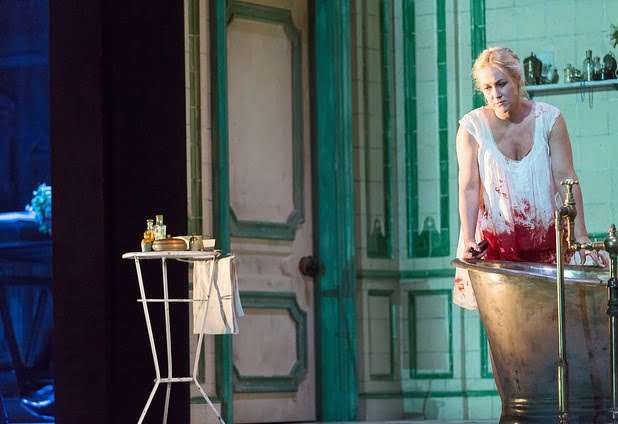 Ticket-holders for Katie Mitchell’s staging of Lucia di Lammermoor were alerted about scenes of a possibly upsetting nature, and you didn’t have to be an Archers scriptwriter to know what to expect when Donizetti’s frail, abused heroine and her lover Edgardo stripped off for some vigorous love-making in a chilly crypt among the tombs of her forebears. Fast-forward three months (the time gap is Mitchell’s invention), and Lucia is pregnant and a victim of graphically enacted morning sickness.

Mitchell’s big idea is to present ‘her’ Lucia as a strong, independent woman rather than a passive marriage sacrifice, a modern free spirit in a corseted Victorian world invented by men. The only trouble is that Donizetti’s music doesn’t support Mitchell’s feminist ideal, and Vicki Mortimer’s lavish set designs further impose their will on the opera’s straightforward, romantic tragedy. Her big idea is to split the stage in two, so that Mitchell can present parallel narratives. 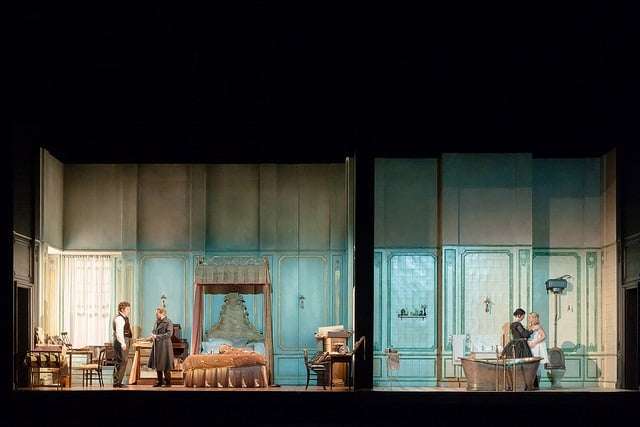 In Act One, in the crypt, we see the lovers’ letters being intercepted, while on the other side in Lucia’s dressing room we see her and her maid Alisa disguising themselves as men prior to Lucia’s tryst with Edgardo. Act Two opens in Lucia’s sumptuous bedroom on one side with a luxurious en suite bathroom on the other, in which Lucia’s illicit pregnancy is made retchingly clear – and, with a setting so thoroughly and fussily Victorian, Lucia’s beastly brother Enrico abandoning the era’s proprieties to barge into his sister’s bedroom, let alone her bathroom, in his attempts to coerce her into marrying the hapless but rich Arturo stretched credibility.

The concept is at its most invasive in the first scene, Wolf’s Crag, of Act Three, in which the vengeful Enrico seeks out Edgardo, on one side, while on the other Lucia and Arturo retire to their boudoir to consummate their marriage with some full-on S&M foreplay, before she and Alisa do a laugh-out-loud botched job of murdering poor Arturo, the effort and shock initiating the gory miscarriage that propels Lucia into her famous’ mad scene’. Wolf’s Crag is usually omitted, so it is lunacy to have it hijacked in such a way, and confirms that Mitchell is intent on telling the audience, in a very heavy- and high-handed way, how to read her symbolism and what to think and feel.

Add to that the reports of Lucia’s subsequent death to Edgardo while we see her messily slashing her wrists, and Mitchell’s mission to control is complete, for which she was rewarded with boos louder than the bravos. There are also a couple of ghosts, of the girl stabbed by her lover and of Lucia’s mother, both of whom haunt Lucia throughout the opera while inviting an oh-no-not-them-again response from the audience. 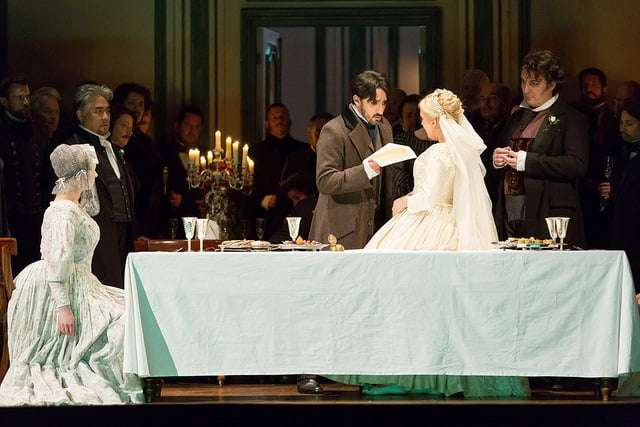 Enrico’s dire financial straits – which explain his eagerness for his sister’s marriage – go for nothing, so too the redeeming, tender aspects of their relationship, with the result that there is no realistic developing of what is in effect a Gothic horror story. It was an irony, then, that in general the men performed so strongly. Ludovic Téziet ramped up the villainy as Enrico and used his broad, dark baritone majestically. Charles Castronovo delivered the most consistently beautiful singing – his tenor has it all in terms of volume, range, lightness and lyricism, and even in such a sexually polarised staging his Edgardo was intensely sympathetic. As Raimondo, Kwangchul Youn was similarly imaginative, and his even, full bass makes a wonderful sound. Taylor Stayton’s neatly sung Arturo was persuasive.

Diana Damrau handled the direction well, and it’s not her fault that she is cast more as an agenda than a character. Her soprano has a lovely, unpressurised sweetness in much of its range, and she puts an expressive parlando quality into the coloratura. While she didn’t give that frisson of anticipated doom in her Act One duet with Edgardo, the music’s transformation in the ‘mad scene’ weaved its tragic spell. High notes, though, were tight, and there was an odd fragmented quality to her quieter singing.

Despite some characterful, atmospheric playing, Daniel Oren’s conducting was efficient but didn’t get inside the music.