Amazingly, this was the first performance of “Fidelio” at the Royal Opera House since 1993 and the first in the refurbished building. The past two productions were not the most critically successful but with a major box-office draw in Karita Mattila undertaking her first London Leonore leading an interesting and balanced cast, and a new and tested production from the Metropolitan in the New York, the omens looked good on paper.

In this first performance there were some musical rough edges, mostly emanating from the pit, which will surely settle during the run. Antonio Pappano leads a generally exciting and dramatic account of the score, pacing the second act particularly well. The short dotted theme that recurs at various points through the overture was not always perfectly co-ordinated and the horns had an unfortunate mishap; and it could be argued that the intricate weaving string figures that provide much of the brooding dark atmosphere did not quite inflect as clearly as needed.

Overture over, matters improved immediately. Pappano is a singer’s conductor, never allowing them to be drowned in the orchestral textures, and rarely allows his sometimes-extreme tempos to give them evident problems: the finale was taken at a tremendous lick without suffering. Yet Pappano is also very alert to important orchestral detail as well. The opening of the ‘Prisoners’ Chorus’ was once such instance – it grew organically in the strings from complete silence (and with no interrupting coughs from the audience during the early pianissimo sections) and the gradual crescendo to the words “O Freiheit” was perfectly judged. The gentlemen of the chorus were on splendid form. There were other moments to treasure – the woodwinds, during Florestan’s first aria and the finale, for example, and the horns redeeming themselves with huge panache in both the introductory and rondo passages of Leonore’s ‘Komm Hoffnung’.

Expectations ran high for Mattila’s Leonore. She is well known as being one of the outstanding singing actresses of our time, with her creamy tone, strong dramatic instincts and her total commitment brought to almost any role she undertakes. So it was here. It does help when Fidelio looks like a young man and acts in a credibly masculine manner, and yet Mattila always reminds that such appearance hides a very anxious yet desperate woman. Her physicality is impressive but so also is her restraint – in the dungeon scene one really felt for this Leonore being so close to her husband and yet unable to touch him. The tenderness of the character was also evinced in the way that this Fidelio felt some strong concerns in her deception of Marzelline.

As expected Mattila’s singing was marvellous – she is a singer prepared to take risks and whilst the lyrical moments were beautifully and lusciously voiced the character’s more desperate moments had an abandon that was exhilarating. As a soprano the higher reaches of the role held no fears for her, but, as her lower register is also quite powerful and well integrated, she sounded equally at ease in the role’s plentiful mezzo episodes. It is good that this role seems to be attracting some sopranos again – one thinks of the vocally resplendent Christine Brewer in recent London concert performances and of Anja Kampe’s thrilling Glyndebourne account last summer. In the alternative casting for this ROH run the role will be sung by Yvonne Howard (on 14 & 18 June) who has a mellower mezzo quality that should allow interesting comparisons for those intending to hear both casts. 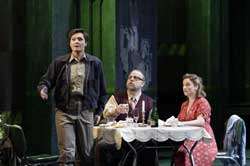 The Royal Opera’s casting department seems to be on a roll at the moment (following the recent starry “Pelléas et Mélisande”) as the remainder of the “Fidelio” cast all sang at a consistently high level as well. The German tenor Endrik Wottrich, Bayreuth’s recent Parsifal and Siegmund, was making his Covent Garden debut and acquitted himself well in the fiendishly difficult part of Florestan. His is not perhaps the most beautiful of voices but he has both the lyricism, agility and also the heft that the part requires and he did not seem to tire before the end since one could hear him clearly in the final ensemble – which is saying something! With dramatic economy of movement he proved an excellent foil for Mattila’s more impulsive acting style. (Simon O’Neill takes the role of Florestan on June 14, 16 & 24.)

Eric Halfvarson, seeming rather slighter of stature that usual, made much of the pragmatic Rocco which he sang in his warmest bass, and played the character rather more seriously than is usual without the loss of the innate humanity of the man.

Ailish Tynan contributed a vocally light and bright Marzelline, starting ‘Mir is so wunderbar’ nicely at a pretty slow tempo, and she managed to evince some sympathy and pathos for her character when Fidelio turns out to be a woman. As Jaquino Robert Murray sang and acted well and made the normally rather insipid character rather more unpleasant, opportunistic and emotionally manipulative. Terje Stensvold sang an incisive if slightly rough-voiced account of the malevolent Don Pizarro. His characterisation was perhaps hampered by the direction, which seemed to leave him somewhat high and dry – such as just before his attempted murder of Florestan and also during the early stages of the finale. Robert Lloyd was, as expected, a benevolent Don Fernando both vocally and dramatically.

Jürgen Flimm’s production was first seen in New York in 2000, and therefore presumably has a tried and tested performance history. The black front curtain bearing the words “Wahre Liebe fürchtet nicht” (True love fears nothing) perhaps promises something more revelatory than is actually delivered, which ultimately is a rather conventional if serious-minded presentation. The settings are modern, with visual references to the aftermath of some political or military coup with ethnic or political ‘cleansing’ evidenced by piles of shoes and empty suitcases on the stage and the destruction of a statue of some discredited dignitary.

As indicated, some of the individual characterisations are strong, and there is a close attention to detail that is mercifully devoid of wilful directorial impositions on the narrative. The sets are impressive and well lit, although the staging for Act One with all the prisoners’ cells open and banked up to one side of the stage is another of those where some of the action will be invisible to at least one-third of the audience. They would miss Leonore opening the cells and the emergence of the prisoners into the sunlight – rather important moments. Do those who import productions or design them for this building ever take the horseshoe shape of the auditorium into account?

Nonetheless it is great to see “Fidelio” returned to the Royal Opera House repertory. As the production settles it will provide an enjoyable evening in the theatre.