George Benjamin
Written on Skin – Opera in three parts to a text by Martin Crimp [sung in English, with English surtitles]

Written on Skin was greeted with widespread acclaim on its premieres in 2012 and 2013 at several European opera houses, including Covent Garden. Its first revival at the latter – with nearly a full house on this opening night – confirms it as a 21st-century operatic masterpiece.

As neither myth nor a straightforward narrative played in real historical time, it evolves its own dramatic dynamic from the intersection of different layers of time in its meta-theatrical stagecraft, which places the 12th-century scenes within the Protector’s domain alongside compartments set in the present that seems elongated if not eternal, and into which the characters usually pass when they are not singing.

Mediaeval Mystery plays perhaps spring to mind, where incidents from the Bible were presented as though historical events but set against a cosmic background of eternal, divine providence. Martin Crimp’s text (he disavows the term libretto) refers to the Genesis account of creation, and the opera starts with three angels on the upper part of the set, drawing the audience back eight centuries to the period of the action through words and the imagination. Despite the angels’ becoming characters in the drama proper, other figures remain in the contemporary spaces those angels previously inhabited; and even though they interact in the present, these figures (suggested as office administrators) mime their actions at a considerably slower pace than they would in reality, or compared with the main plot of the mediaeval troubadour story which unfolds underneath or to the side. Although this choreography is voiceless, George Benjamin’s often delicate, ethereal music moves in pace with that rather than the latter. 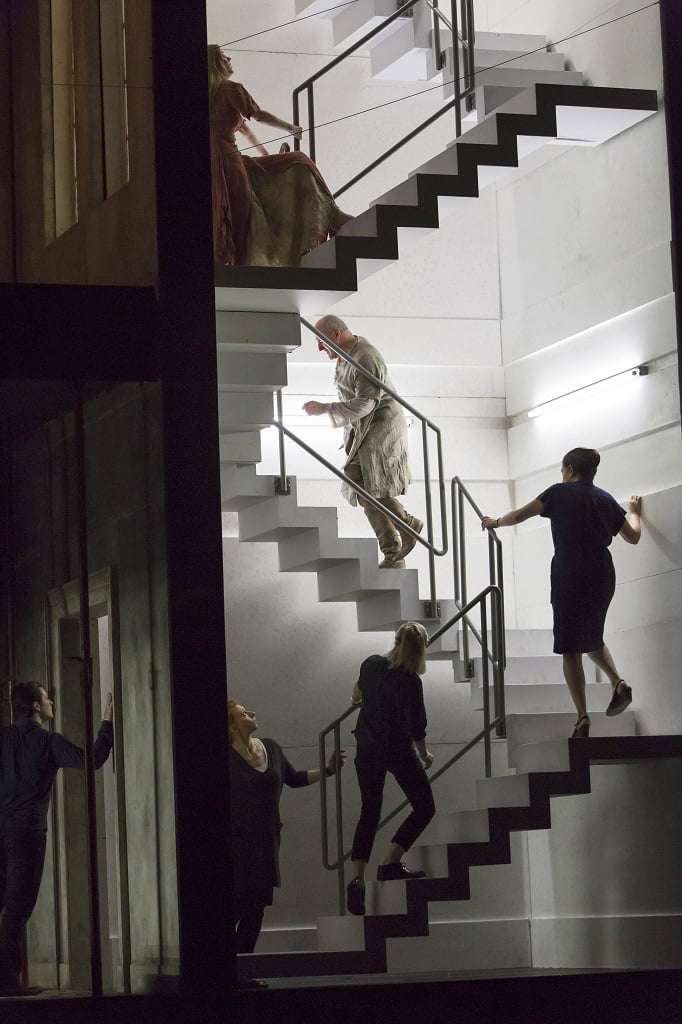 The suggestion seems to be, then, that human preoccupations with possession, status, immortality, and romantic and sexual love endure beyond any historically contingent present, but as fundamental facets of human nature in every age. The drama speaks to contemporary audiences in elevating above the immediate world not an immutable divine law of justice and mercy as in the Christian scheme, but a Freudian superstructure of inscrutable, subconscious motives and desires.

The latter is compellingly echoed in the sustained restraint of Benjamin’s score – similar to Debussy’s Pelléas et Mélisande in that respect, and in the generally direct, syllabic setting of the words. It is also achieved in the use of such instruments as the mandolin, glass harmonica, and viola da gamba, not to summon a particular era of the past but, as Benjamin’s one-time teacher, Olivier Messiaen, might have done (as in Chronochromie) to ‘colour’ time with a distinct timbre and to evoke some experience unavailable to any single sense by itself. The manner in which the characters often deliver their words in reported speech about themselves in the third person (… “says the Boy”… “says the woman”) sometimes comes across as a misjudged literary tic, but it just about justifies itself if construed as another device by which the work’s content is presented in a way which eschews straightforward linear development.

The one cause of regret is that the almost mystically-sustained tension of the music is allowed to sag between the work’s three parts by a general pause between each which – sad to say – invites the audience to dispel the atmosphere by disruptive chatter (as in this performance). To my mind, recalling the comparison with Pelléas et Mélisande, the work’s integrity cries out for orchestral interludes to stitch the parts together into a seamless unity, as Debussy was prevailed upon to provide between scenes. Or one might, to Debussy’s consternation, appeal to the magic of old Klingsor and invoke the example of Wagner’s transformation scene in Act One of Parsifal: whether deliberately or not, Crimp and Benjamin’s dramaturgy surely enacts something like the paradigm of Gurnemanz’s words that “time becomes space”. 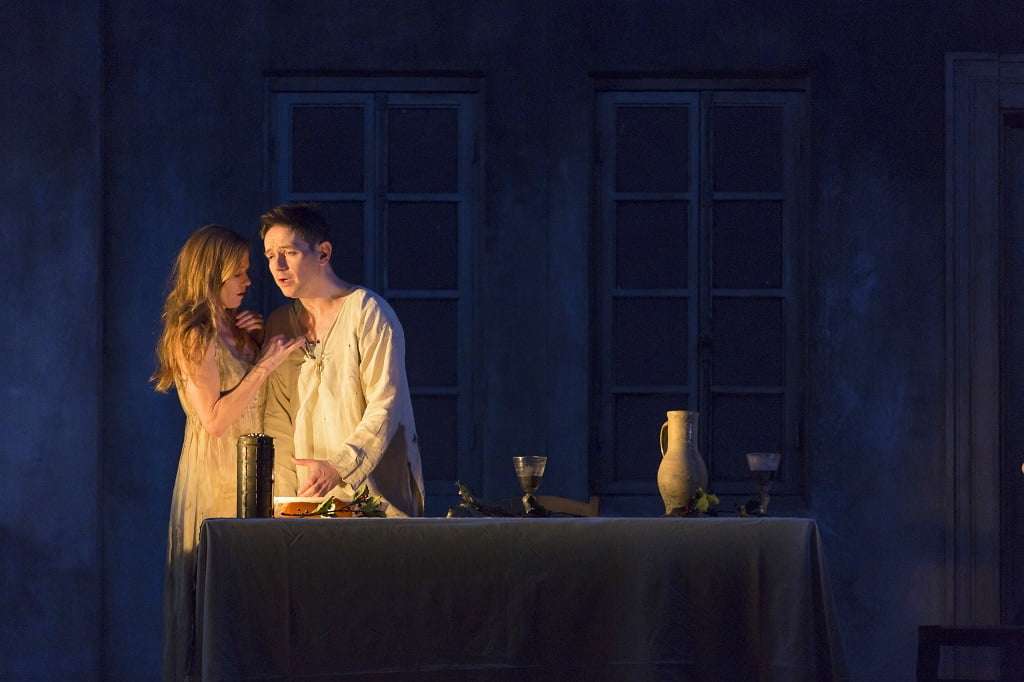 Be that as it may, the performers all have the measure and spirit of Benjamin’s accomplished and rarefied score, not surprisingly as all but Mark Padmore have already gained experience of it from previous representations, though that is not to diminish their achievement. Christopher Purves was on marvellous form in the role of the Protector, which he created at its premiere. He brings a lyrical beauty to his singing, even as the part approaches Sprechgesang, though giving due emphasis to the more violent and unsettling passages, and Purves easily enunciated his words the most clearly of the cast. Barbara Hannigan (who also appeared in the premiere) proved a versatile and supple Agnès, ranging from browbeaten submission to the Protector’s loveless possessiveness, to steely resolve. An unexplained oddity, however, was that her pronunciation of ‘k’ in some instances came out as a ‘ch’, as in “back”, “take”, and even at the beginning of “kitchen”; with no other attempt otherwise to mimic a particular dialect or accent it was not clear why this anomaly emerged.

Iestyn Davies inhabited the role of the Boy with confidence, having taken it on in Paris. The evenness of tone in his singing imparted an ideally disarming quality to his character which fatally shakes up the relationship between Agnès and the Protector. In the smaller parts of Agnès’s sister and her husband, Marie and John, Victoria Simmonds and Padmore were also admirably clear in diction and assured in their music. The composer retained a flexible control over the orchestra, which responded in sustaining the score’s otherworldly atmosphere with quiet intensity, but rising with alacrity to its more dynamic and vivid points which underline the climaxes of the scenes. Rather than impelling the action, the orchestra suffuses the drama with its own distinctive, brooding atmosphere.

This revival of Written on Skin will give those who saw its premiere a welcome chance to ponder again its subtle and intricate depths and allusions. Those who did not, but care about the continuing development of opera as a vital art form, should take the opportunity to explore what the genre can still express to us today.