The Orchestra of the Royal Opera House
Sir Colin Davis 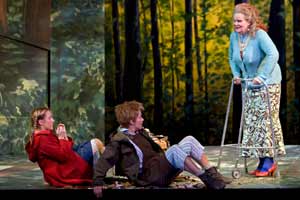 Engelbert Humperdinck’s “Hänsel und Gretel” arrives at the Royal Opera House for its first revival there since before the war. Amazingly, it was last heard in this theatre in the 1936/37 season. Indeed its first appearance at Covent Garden, in 1896, it seems that the opera was played in a double bill with either “Cavalleria Rusticana” or “I Pagliacci” – more unlikely pairings for are hard to imagine (don’t try!). Anyway the UK has seen some truly excellent and varied productions over the last decade or so – one thinks of David Pountney’s at English National Opera in the late 1980s and Richard Jones’s for Welsh National Opera that is still part of its touring repertoire as well as this year’s versions at Glyndebourne and the Royal Academy of Music.

This Royal Opera account, on this first-night performance, does not quite match the overall theatricality or sheer inventiveness of those aforementioned. The basic setting of the wood-scene which manages to be alternatively welcoming and then full of foreboding is very evocative and well lit, and the children’s bedroom setting of the first act is perfectly adequate if not that interesting. The Witch’s hut, full of ovens and a rather grisly child-filled larder, is rightly unpleasant too. However, the directors seem not to know how they want to play the piece. Rightly, they do not go for the chocolate-box style ‘traditional’ production, but they seem unsure how to generally pitch the piece. Thus its meanders from the whimsy (the appearance of the Sandman), through passages of slight send-up (the Dew Fairy), the odd (the ‘angel’ pantomime) and finally to the decidedly dark and unsettling (the baking of one of the witch’s earlier victims, the near-baking of Gretel and the actual roasting of the witch). 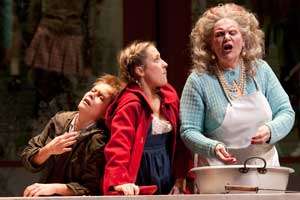 These various approaches seem to militate against one another and ultimately any cogent sense of concept seems lost. This is a shame as the cast is generally populated with fine singing-actors and -actresses who could have been inspired to something really outstanding. There is also a fine and rather serious-minded orchestral performance. Sir Colin Davis eschews the saccharin approach and opts for a pretty full-blooded reading, one that is not afraid to usher in the dark moments such as nightfall in the forest and the panic that engenders in the children with an almost terrifying directness. His reading also relishes the lyricism and dance passages of the score – indeed I’m not sure I’ve ever registered how much dancing Hansel and Gretel do in the course of the action. The playing was taut and versatile with the lower pitched instruments getting particular prominence in the balance. There was some truly virtuoso yet understated clarinet- and flute-playing in at the start of Act Two. All the off-stage effects (whether cuckoos or and Peter’s entrance) worked wonderfully well.

“Hänsel und Gretel” is heavily reliant on its two named parts. Both Angelika Kirchschlager’s boyish Hänsel (mercifully not in the pantomime sense) and especially Diana Damrau’s capricious Gretel are as fine and well matched a pair as one could hope for. Their sappy voices blend exceptionally well, and they managed to avoid operatic excess and thus the pitfall of being an Octavian/Sophie pairing. Damrau did a nice line in one-legged singing and her luminous voice burst forth expressively as she panicked in the wood. In the scene in the Witch’s house she also made Gretel’s shock and terror extremely vivid. 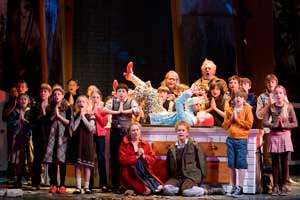 To cast stage-stealers such as Thomas Allen and Elizabeth Connell as their parents was also inspired. Whilst their voices may no longer be in their primes they are consummate professionals and really know how to project text and tune. Connell’s first appearance – looking alarmingly like ‘Tubbs’ from “The League of Gentlemen” – was both amusing and serious at the same time, and she caught the mother’s moments of despair well. Allen’s Peter was nicely bluff and authoritative. These parents still evidently had a lot of spice in their relationship!

In the roles of Sandman and Dew Fairy Pumeza Matshikiza and Anita Watson both displayed the warm voices the roles need. If Watson’s character was the more engaging this was because she carried off the surreal ‘house-cleaner in the forest’ routine with a delightful sense of insouciance.

The children of Tiffin Boys’ Choir and Tiffin Children’s Chorus all sang strongly, tunefully and sweetly – just right!Which leaves Anja Silja’s Witch. Seasoned Silja-watchers will know to expect an interpretation that will have both intelligence and theatricality. To some extent they get this. On her first appearance this Witch is an old woman with a walking-frame, but the sense of bodily strength and malevolence is very strong indeed. Her antics in the kitchen were performed with black-humoured enjoyment. But, and it is a big ‘but’, her voice is sounding very threadbare these days and her pitching, which has always had its erratic moments, has become even less certain. It was noticeable she took some of the lower, less-strenuous, alternatives of the part. Theatrically she just about gets away with it – but this performance may test the indulgence of some.

It’s great to see “Hänsel und Gretel” back in The Royal Opera’s repertory and hopefully the production will bed-in during the run.