The Orchestra of the Royal Opera House
Rory Macdonald 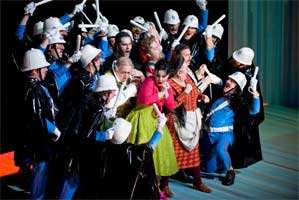 “Il barbiere di Siviglia” here returned for its second revival in Moshe Leiser & Patrice Caurier’s production from December 2005, which was superbly revived some eighteen months ago, too. On that latter occasion a stellar cast graced the boards of Covent Garden, whereas this revival only found its strengths at the edges.

Leiser & Caurier’s modus operandi is writ large throughout the evening – bumbling characters, crowds of dancers, bright colours, small and contained stage-area, and characters seeming unreal, reduced to puppets – ‘Barber’ seemingly an ideal vehicle for their brand of humour. However, with the characters ruled by events, the roles of the principals, especially Rosina, impish and unsympathetic, eventually made for a rather lacklustre first-night: the clownish costumes and anonymous sets aided-and-abetted this miscalculation. 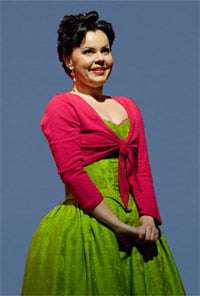 The eponymous barber found Transylvanian-born tenor Levente Molnár (making his debut in the part) eclipsed by John Osborn’s Count Almaviva, though this pair was outclassed in all respects by the duo of Bruno Praticò (Dr Bartolo) and Ildar Abdrazakov (Don Basilio). Praticò has Bartolo in his bones, and he invested every nuance with character – he wants to marry his ward Rosina, and he tries his best to win her heart – without allowing him to descend into buffoonery. His voice was strong and expressive, much like Abdrazakov’s delightful bass, whose own projection and clarity were a pleasure to hear. Whilst not quite looking the part (his costume barely fitted his large frame, and his height meant that he had to stoop a lot to look older than he is), he is a singer to watch out for. 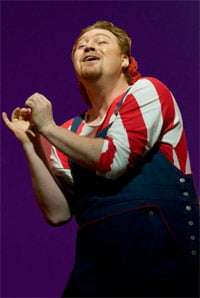 Molnár and Osborn also did not marry the requisites of singing, presence and acting. Rossini is notorious for rapid writing, and Molnár was found wanting. His big entrance of ‘largo at factotum’ was subdued and did not sustain its length: thereafter Figaro’s task is somewhat thankless as his character is sidelined. Similarly, Osborn does not yet possess the ringing tenor-style that truly memorable exponents of this part have espoused. Aleksandra Kurzak is the soprano of the moment (having just been signed by Decca) yet this, her first Rosina at Covent Garden, was a nervous, constricted and restrained affair.

Rory Macdonald was impressive in the pit, and whilst the Overture may not have fizzed in true Rossini style, what was clear was that he had ideas about the music: it was interesting to listen to, and he proved a sympathetic accompanist, even if the ROH Orchestra wasn’t firing on all cylinders.

“Il barbiere di Siviglia” is not an opera to be treated lightly: a cast of first-class singers is required, and certainly a more interesting production than this is what Rossini deserves; thank goodness for the experience of Praticò and Abdrazakov, and for the fun cameo of Jennifer Rhys-Davies as Berta, Bartolo’s bumbling housemaid.