It’s always hard for an opera house that is about to stage performances of the ‘Ring’ cycle to find other productions to fill the evenings in the run up to and between the Wagner performances, and to leave the stage free enough during the day for all the necessary rehearsals.

The Royal Opera has come up with a brilliant solution by importing Robert Carsen’s stark but atmospheric staging of “Iphigénie en Tauride” – written in the 1770s for Paris by the much-travelled Christoph Willibald Gluck (1714-1787) – first mounted in Chicago and San Francisco, and also bringing the Orchestra of the Age of Enlightenment in to free the ROH Orchestra the necessary rehearsal time for Wagner.

Gluck’s operas have not been seen much at Covent Garden (“Iphigénie en Tauride” last in 1973 conducted by John Eliot Gardiner), so it is good to encounter one of his works in a staging. For this one Tobias Hoheisel provides a tall single-unit box design set, which allows space for the performers, and yet also manages to be claustrophobic enough for the more intimate scenes, thanks to some very effective lighting. True to the drama’s origins in ancient Greek theatre there is an energetic “chorus” / movement group that helps propel the principals around as well as providing strong visual enactment of the Furies. The use of this group is controlled enough to prevent distraction or, worse, becoming tiresome. Carsen’s approach may not please all, but it gets to the core of the work with an engaging directness. 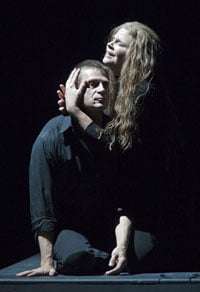 A successful performance of this opera, which is essentially a drama of emotion rather than of action, is highly dependent on its three main protagonists. By engaging Susan Graham as the heroine, who performed in this production in the American performances and has long experience of the role in other stagings, the pivotal central role was completely realised. Graham is very much in her vocal prime and the role sits well in the rich and velvety middle part of her voice, and her excursions into the higher reaches were managed without strain. Words and coloratura were used to great effect. She’s also an intense and appealing performer who knows how to use stillness and body language to great effect. Iphigénie’s attraction to Oreste was enacted with pathos and not without an erotic undercurrent as well, and this made their final recognition scene – the stuff of any operatic Greek tragedy involving any member of the house of Atreus – very moving.

That she also had Simon Keenlyside and Paul Groves playing Oreste and Pylade respectively lending marvellous vocal and dramatic support was fortunate. Both of similar physical stature and looking almost twin-like they acted the guilt-ridden prince and his faithful friend to the full. Keenlyside once again giving a performance of great physicality, showed off his bronzed baritone to effect and, singing in impeccable French, delineated his character’s emotional turmoil fully. ‘Le calme rentre dans ma coeur’ was something of a tour-de-force, the highly agitated ending contrasting with the character initially seeming calm. His emotional collapse as he states that death would be relief from the madness he was suffering, coming at the end of Oreste’s impassioned argument with Pylade over which should sacrifice their life for the other, was a telling moment. Paul Groves, another singer experienced in this production, delivered a virile and engagingly sung account of the devoted and occasionally uncomprehending Pylade, and excelled in his solo numbers which were sung in a plaintive and covered tone. The implied depiction of Pylade as the alter ego of Oreste added an interesting dimension to his portrayal.

In the smaller roles Clive Bayley made much of little as Thoas, and the lush tones of Cécile van de Sant’s Diane contributed much to the final scene. The Royal Opera Chorus was on fine form, although the placing away of these singers produced some odd acoustic echoes in some parts of the House.

Ivor Bolton proves himself an excellent Gluck conductor and his reading had pace, variety and sweep. From the short introduction and orchestral storm that opens the work the OAE players were wonderfully responsive. The underlying bass lines underpinned the body of sound, and the violas were allowed to sing out their contributions. Only the somewhat intrusively watery oboe disappointed. So a successful, bold and imaginative start to The Royal Opera season.