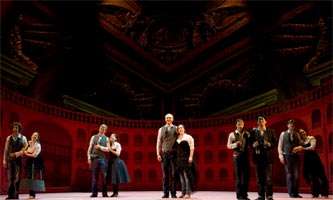 This enjoyable matinee, showcasing a rich crop of young and talented singers, conductors and director currently affiliated to The Royal Opera, effectively closed the house’s current season … well except for “La traviata” in the evening and a trip to the Royal Albert Hall the following night for “Simon Boccanegra”.

Scenes from four Richard Strauss operas, all linked by love, graced the concert’s first half. “Der Rosenkavalier” made a vibrant start for the ROH Orchestra, Steven Moore obtaining some energetic and detailed playing. The mood changed to the gently ceremonious, somewhat reserved handing-over of the silver rose. The Sophie of Simona Mihai was a little shrill, Kai Rüütel’s Octavian (the Cavalier of the Rose) a little distant but Changhan Lim’s Faninal resounded around the auditorium signalling a singer with a powerful and rounded voice used to commanding effect; someone with stage presence and arresting vocals; sensitive and suave, too, as in the “Intermezzo” duet, Eri Nakumura, smoother at the top of the range than she can be, slightly overshadowed in portrayal if offering parity of voice and projection.

Elisabeth Meister was impressive in all she did, not least in the “Capriccio” excerpt (as dreamy Countess Madeleine) in which the supremacy of words or music is debated in this “conversation piece” – does music “illuminate” or “ruin” a text? Olivier, a poet, took the latter view, but he was underplayed and under-projected by David Kimberg. Meister also made Marietta an interesting character, American Victor Herbert (1859-1924) providing a score as light as a soufflé, charming and elegant to be sure if shown up by the greater melodic and rhythmic variety of the surrounding music by Offenbach, Lehár and Johann Strauss II. Herbert’s over-saccharine piece outstayed its welcome even as an excerpt; yet the singers acted and sung well and caught its spirit with enthusiasm; so too the shenanigans and happy-ending of “The Gypsy Baron” (Nakamura, Rüütel and Robert Anthony Gardiner). 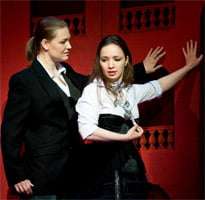 The excerpt from “Die schweigsame Frau” suggests a production of the whole opera would be welcome, a delicious and flirty score in which Aminta (an opera singer) was delightfully taken by Simona Mihai, whereas the blustery noise-hater Sir Morosus, who disinherits his nephew Henry, Aminta’s husband, until he finds a ‘silent woman’ (which he does – an in-disguise Aminta). Lukas Jakobski did a good job as the crusty admiral, and all was nicely resolved to close Richard Strauss’s contribution to this well-conceived programme.

To open part two, the Suppé day-in-Vienna overture was very welcome – although the operettas this overture and others precede are seldom-performed, the overtures themselves are gems and should be played more often. This performance, conducted by Dominic Grier, although well-paced and notable for a beautiful cello solo, presumably from George Ives (which drew a well-earned if intrusive “bravo!”), was also ragged in ensemble with some rough contributions. The Offenbach bought a likeable trio from Steven Ebel, Changhan Lim and Lukas Jakobski, all required to deliver a dance routine that reminded of Wilson, Keppel and Betty. In the snippet from Lehár’s “Giuditta”, Ji-Min Park brought his heroic tenor to bear for Octavio’s imbibing paean to army life, a sweet, seductive waltz. And we had champagne sparkle from “Die Fledermaus” to give all ten singers a chance to raise their glasses to music and singing.

All the scenes were played out to a red semi-circle – coliseum-like, the singers as gladiators – and a baroque-decorated ceiling. Costuming was simple and appropriate, and acting and delivery of speech occasionally stilted (more so from the men). José Darío Innella directed and took a few uncharitable boos to greet him at the final curtain-call; the only questionable bit of direction was to get some first-on characters to revolve 180 degrees to face the audience: reminded of a roulette wheel – Rien Ne Va Plus. The very experienced Robin Stapleton conducted the majority of selections and his vivid baton kept the show very much on the road.