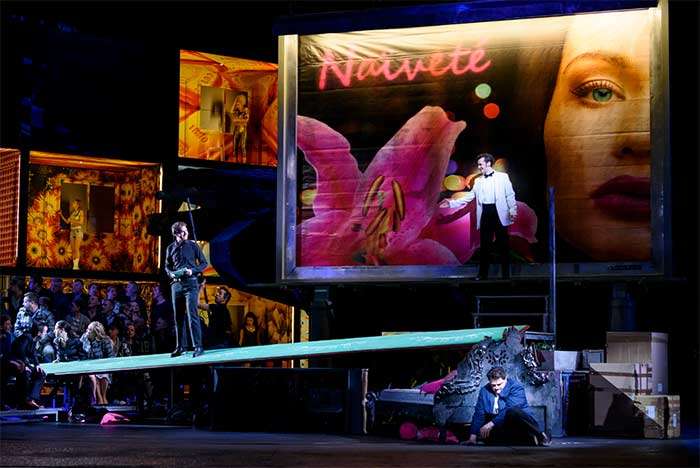 This revival of Jonathan Kent’s 2014 direction of Puccini’s Manon Lescaut – the composer’s third opera, which was premiered within a week of Verdi’s last, Falstaff – comes in two distinct halves in terms of success, the staging only catching fire at the opening of Act Three, a ‘reality TV’ show (a mix of Married at First Sight and Naked Attraction) where the condemned are paraded before a baying crowd before being shipped off to their lives in exile.

Whilst quite far from Puccini’s vision or indeed telling the story as given in the libretto, this second half resonates with the current zeitgeist and Des Grieux’s pleadings with Manon – the roles sung with stupendous passion by Aleksandrs Antonenko and Sondra Radvanovsky – live in the memory. Earlier Manon’s boredom, and consequent hedonistic indulgences (Act Two especially), are unconvincing because they are not in Puccini’s conception in such explicit terms. 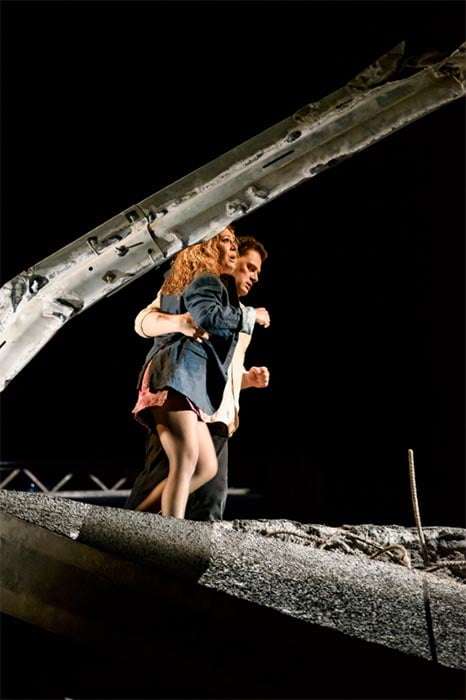 Act One’s staging is a block of flats outside of which Manon is delivered by a large SUV, and then it is onto Act Two’s horrid-and-squalid sex-worker’s boudoir. Act Four’s unfinished flyover could be anywhere and the backdrop suggests Monument Valley, which is hardly New Orleans. Such failures and perversions are balanced by the singers and players.

Pushing and cajoling the plot, Antonio Pappano displays typically consummate intelligence with Puccini’s score: emotional clout made for a pulverising conclusion and the ‘Intermezzo’ before Act Three was a real weepy. The ROH Orchestra was on blistering form throughout, playing with gusto while also sensitive to the singers. The Chorus was on top form.

As the eponymous wannabe-nun-then-courtesan-then-exile, Radvanovsky assumed the Manon role gloriously, a portrayal to treasure: she coloured stand-out moments with rare beauty and tortured our souls. Antonenko was also ably up to the demanding role of Des Grieux, despite the ridiculous meanderings around the set that he is required to do.

Eric Halfvarson (Geronte) and Levente Molnár (Lescaut) put themselves gamely into the situations forced upon them, and both acquitted themselves well vocally. But it was David Junghoon Kim as the Lamplighter that is deserved of special mention: heartfelt and floating with its emotions, his contribution was a gorgeous moment and typical of an evening during which the music-making far outweighs the staging.