Schumann and Bernard Foccroulle
Zauberland – a dramatic piece for soprano, piano and four actors, with music by Robert Schumann & Bernard Foccroulle and texts by Heinrich Heine & Martin Crimp [sung in German and English with English surtitles] 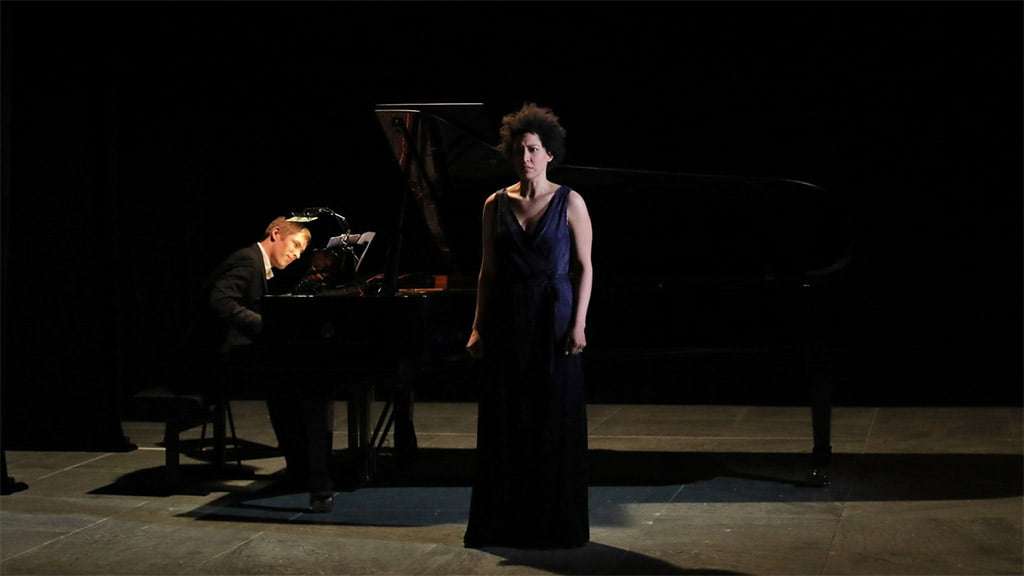 A pregnant opera singer flees north from the carnage in Aleppo to seek safety in Germany. That is the barest outline of Katie Mitchell’s Zauberland (Magic Land), her dramatisation of Schumann’s Dichterliebe to poems by Heine, that morphs into a song and solo piano sequence, by far the longer part of this ninety-minute show, by the Belgian composer Bernard Foccroulle (organist, former intendant of Brussels’s La Monnaie opera house, and composer) and the poet/playwright Martin Crimp (who has worked as librettist on George Benjamin’s operas).

In my experience, dramatised song-cycles – Winterreise and The Diary of One who Disappeared are two prime examples – actually reduce the originals’ impact, and Zauberland does not buck the trend, although it is on a bigger scale. Dichterliebe distils German romanticism and spares nothing of the eponymous poet’s fragmented ecstasy and despair. Where Schumann dropped four of the projected twenty songs, Foccroulle and Crimp have inserted their own material, which then takes over as a cross-referencing commentary and expansion of Schumann and Heine for the rest of the evening, much of Foccroulle’s music a central-casting, Second Viennese School-style elaboration of Schumann’s magical postlude for solo piano. You may well wonder what Mitchell’s deconstruction can add to a song-cycle that already has the process written into it with peerless subtlety, and the answer, via her dramatisation, is not a lot. 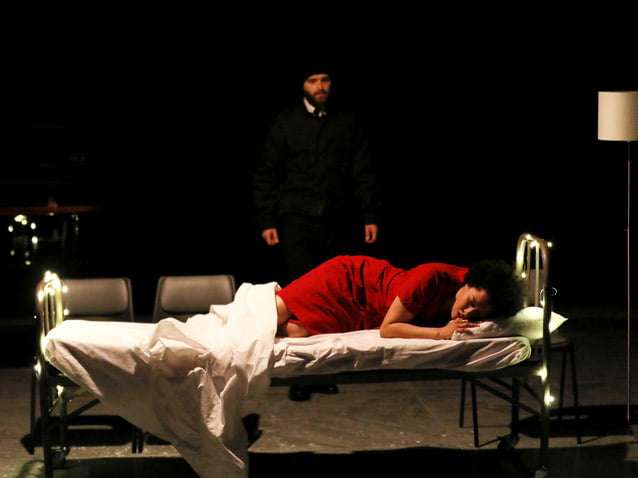 The Zauberland of the title is the singer’s dreamworld of memory, desire, war and, above all, loss, realised by her and the support of a trio of young men in suits, one of them playing her husband killed in Syria, and a girl who dances distractedly in a wedding dress or plays the singer’s daughter. The actors also do the scene changes and manage props, the point of a lot of them barely discernible in the gloom. The two extravagant flower arrangements either side of the stage (as you get in the Wigmore Hall, for example) suggest an enclosed temple of art – a metaphor, as Mitchell writes, “for a society trying to hold global change at bay”. And that gives a clue to Mitchell’s approach – a finger-wagging lecture that, with stern hauteur, tries to forge an artwork out of the miseries of the Middle East, which you would have thought will be of scant relevance to those affected.

The American soprano Julia Bullock was singing through a fever as well as coping with having clothes pulled off her and then put back on again by the actors, being blindfolded, interrogated and threatened with being burnt. Dichterliebe stood up well to Mitchell’s agenda, but Julia Bullock’s voice didn’t have the range for a cycle that is composed for the male voice. She was much better suited to the Expressionist flavour of the Foccroulle/Crimp material. Cédric Tiberghien’s superb role at the piano added much-needed warmth, empathy and character, although not even he could disguise the impression that the music didn’t know how to end.