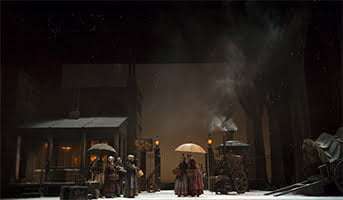 John Copley’s venerable production of La bohème is 38 years old, but it is easy to see why it continues to delight audiences. Traditionally set, in the time and place the composer intended, it offers lavish spectacle and Puccini’s sumptuous score is a perennial favourite.

For the current revival, The Royal Opera has pulled out the stops to offer a leading tenor – Rolando Villazón, following in the august footsteps of Pavarotti and Domingo, among many others – and one of the world’s foremost conductors – Sir Mark Elder, who made his ROH debut with this very production back in 1976. Furthermore, John Copley has returned to direct. And yet, despite all that – or perhaps because of it – this opening night felt lacklustre. Although it is hard to imagine more perfect-looking sets and costumes, the great age of the production seems to sap any sense of spontaneity from the cast – even though most of them are new to it this time around. The choreography of the four bohemians’ larks felt especially contrived and tired. 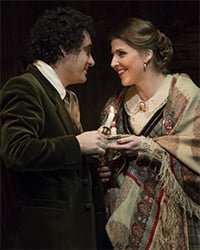 Villazón, who first played Rodolfo here in 2005, relished the comic antics, projecting a lively personality with his crisp, Chaplinesque movements. His glorious voice was supremely fluid and delicate – at least in Act One – but it is small. He frequently struggled to be heard over the orchestra or other singers, and by Act Three his upper register appeared increasingly strained, to the point of his taking some of the highest notes down an octave. Whether this was merely first-night nerves remains to be seen.

Latvian soprano Maija Kovalevska is well suited to the role of Mimi in her homely, demure appearance with radiant flashes of being bubbly. Her strong, well-rounded voice was impressive, if a little lacking in subtlety. Newcomer Stefania Dovhan is a scene-stealing sexy and feisty Musetta, well-sung despite a more vibrato-laden tone than is ideal for the role. They were supported by a fine young trio of bohemians, and stalwarts Jeremy White and Donald Maxwell provided splendid comic turns.

From Elder the music was nuanced and powerful, but it rarely sparkled. There was little sense of fun in the light-hearted moments, and the turgid feel to the Act Three quartet drained it of emotional impact. There was still much to enjoy – Copley’s multi-levelled bustling street/café second Act is one of the great operatic crowd scenes; the wintry snowfall in Act Three is magical; and there was sincere poignancy in the final Act – but overwhelmingly it feels time to retire this too-often creaking structure to allow new life to be breathed into what should be one of the most lively, soaring, vibrant and tear-jerking of operas. This seems unlikely, however. Obviously one of the house’s biggest cash-cows, the current revival – with most of the roles triple- or even quadruple-cast – is scheduled to run until mid-March.