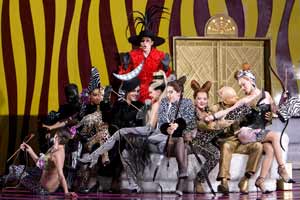 This performance of “La Calisto” was the first time that any opera by the Venetian master Francesco Cavalli has been produced by The Royal Opera; quite astonishing given his influence of the art form. Whilst Monteverdi operas utilised an extravagant court orchestra in Mantua, Cavalli’s generally employed small orchestras of strings and basso continuo to meet the limitations of the public opera house that he knew in Venice.

The ‘public opera house’ is important when assessing exactly for whom these operas were written. They were designed to appeal to the masses, using tawdry ideas of sex and even camp characterisation. One suspects that performances of these works were noisy, riotous affairs, with the audience demonstrating their approval – or lack of it – through heckling. There can be a serious message, if one wants to look for it; but ultimately operas of this period and place tell a funny story in a wacky way. The direct descendent of this type of opera is pantomime. 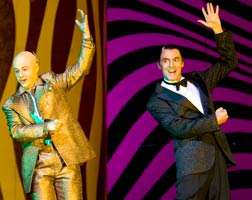 David Alden, making his first appearance for the Royal Opera, realises this superbly in his crazy production (from Bavarian State Opera) of “La Calisto”. It is a triumph of staging and understanding, and the frequent moments of silliness never undermine the poignant parts. The story of the opera is a mixing up of three tales from Greek myth (Venetian audiences did not want ‘just’ one story); their only connection is Diana.

The central narrative uses the myth of Calisto, a young nymph raped by Giove disguised as Diana and later converted into a she-bear by the jealous Giunone. Secondly, there is the story of the handsome shepherd Endimione, with whom the moon (Selene/Artemis/Diana) fell in love after watching him asleep. In order to enjoy his beauty eternally she obtained from Giove the gift of perpetual youth united with perpetual sleep. The third story (and the most comic) involves the love of Pane, the god of shepherds and flocks, for Diana. In Cavalli’s version of “La Calisto” rape is transformed into seduction, which makes Calisto’s punishment more palatable. 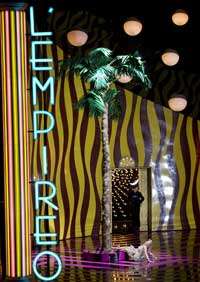 The events of the opera in this production take place in what might be an Austin Powers-like sofa-cum-cocktail bar (called “L’empireo”) where a menagerie of characters wander about – including a champagne-carrying giant chameleon! Characters’ personalities tend to be hammed-up and exaggerated, their motives made obvious. But the combination of great acting, superb singing and supportive music-making from Ivor Bolton and the musicians makes for a great evening of entertainment.

Most of the cast created their respective roles for the first (in 2005) and subsequent revivals of this production in Munich, and this experience is pertinent. The title role is sung by Sally Matthews. Hers is a dramatic role and carried with essential grace, the sympathy for her character’s predicament that she encourages being entirely fitting. As her seducer Giove, Umberto Chiummo (making his House debut) gave the most compelling performance. At all times he was the centre of attention and his roving caddishness was delightfully fiendish, his powerful, wicked baritone mining the depths of depravity with wilful disregard. 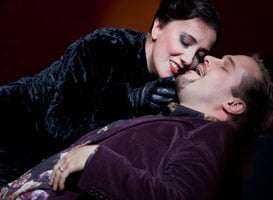 As the shepherd Endimione, Lawrence Zazzo confirmed his status as a great countertenor, his thrilling, bright voice consuming the auditorium. His rival for Diana’s affections is the satyr Pane, a grotesquely-comic creation. There is only lust on Pane’s mind and Dominique Visse had the air of Baldrick (“Blackadder”), being very common and not capable of deep thinking. Guy de Mey, in drag as Linfea, was very much the Grande Dame of the opera; a witty and pointed realisation. Although Diana is central to the story she does not appear that often, so it is to Monica Bacelli’s credit that Diana’s presence was felt throughout, being impertinent and smart-alecky. Giove’s sidekick is Mercury and here the baritone Markus Werba really shone, alive to the preposterous scheming of Giove.

With a substantially raised orchestra pit, Ivor Bolton was able to secure some glorious details from the music. When Raymond Leppard produced “La Calisto” for Glyndebourne in the 1960s he used an ‘enhanced’ score. Of course, Bolton has gone back to the original.