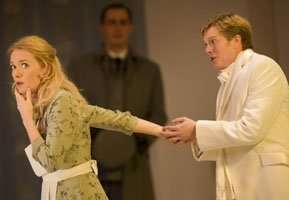 Expectations were high for this the debut performance of Magdalena Kožená at the Royal Opera House, and singing the difficult role of Rossini’s Angelina (Cenerentola) for the first time as well. On paper it was an enticing prospect for Kožená is known to have a voice of great beauty and fluidity and certainly to have the range that this role requires. She also has a reputation for stage performances of complexity and intensity. In sonic terms Kožená proved more than equal to the vocal challenges of the part, demonstrating beautifully warm and integrated tone, and impressive and wonderfully improvisatory coloratura technique. In many respects she reminded one of Frederica von Stade who very much inhabited this role in the middle part of her career.

The current Royal Opera production, now in its third revival, plays the piece fairly straightforwardly in terms of staging and thus much depends on the singer to bring their own personality to their interpretation. In some respects Kožená disappointed here, for she often seemed awkward and adopted a rather hangdog appearance and rather oddly crouching posture for her scenes in Don Magnifico’s palace, presumably to emphasise that the character is downtrodden. But the text implies she has an inward composure and self-assurance – for she would otherwise not stand up to her sisters in quite the way she does. Kožená also lacked that serenity that should make her appearance at the Prince’s palace at the end of the first act such a sensation. One of the problems was that some of her coloratura seemed physically effortful to deliver, and surely half the point of Rossini is that such singing should be effortless. So her physical antics and overuse of her cloak in her final rondo detracted from the joys of that great final scene. 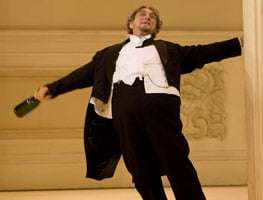 That the Don Magnifico of this revival, the masterful Alessandro Corbelli, was showing how it should be done probably emphasised this more. As expected, Corbelli delivered the complete Italianate buffo performance of this self-deluded pompous and cruel man. Vocally he is completely up to the role and his use of text is an absolute joy to hear. Its hard to make Don Magnifico’s conversion from stone-cold sober to outrageously drunk believable, and yet with deliberately flat singing and smudging of words and some well-judged Chaplin-esque antics with a wine bottle this was something of a tour de force. His ability to sing Rossinian patter is something to be marvelled at. That he also brings the seriously petty and nasty side of the character out means his performance s worth the price of admission! 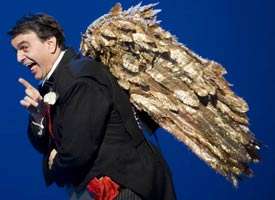 There are some other excellent performances, too. Toby Spence acquitted himself excellently as Prince Ramiro, bringing a welcome heroic vocal quality to a role often sung by lighter tenors than he is. His florid singing is pretty good too – although he does not have quite the effortless ‘ping’ for the high notes of the conclusion to ‘Si, ritrovato io giuro’. He acts well, and looked a credible matinee idol. Lorenzo Regazzo managed the impossible by making Alidoro seem interesting, and his sappy bass was the bedrock of all those complicated ensembles. (Alex Esposito sings Alidoro in the final two performances.) 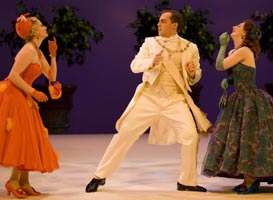 At the start of the second act an announcement was made to the effect that Stéphane Degout was experiencing vocal difficulties – that had been evident. He initially seemed to have the right sort of voice for the part, although his coloratura is sprinkled with aspirates that can make it sound rather strenuous at times. He too indulged in over-reliance on his cloak as a prop – but later settled to give a nicely judged interpretation of Dandini. With a return to full vocal health he’ll seem happier.

The two sisters have more to do that one realises in this opera, and can be overlooked. Both were nicely differentiated here, but Leah-Marian Jones’s experience in this production certainly told. It is quite hard to take your eyes off her Tisbe at times, as she’s a natural comedienne even when not the focus of attention. Watch for her gulping pills at Angelina’s veil being lifted at the ball.

The orchestra under Evelino Pidò delivered a very energetic account of the score – not always perfectly precise but full of brio. Some of the tempos seemed dangerously fast and the woodwind-playing was amazingly articulate and beautifully phrased and moulded nonetheless. All the felicitations of Rossini’s score rang our clearly and brightly with only a hint of stodginess in the lower strings and brass sometimes, albeit rarely, souring the mood. Occasionally Pidò allowed his singers to race ahead and had to drive the orchestra to catch them up. Thus not all those exhilarating ensembles that gradually build up and then take off quite did so. The short storm-passage in Act 2 – a characteristic scene-change device in many Rossini operas – was perfectly judged. Mention should be made of the sparkling recitative and the excellent fortepiano continuo.

So this is an enjoyable ‘panto’ substitute this Christmas with Moshe Leiser and Patrice Caurier’s production in Christian Fenouillat’s simple, colourful and effective designs reviving well once again.