This extended revival of Richard Eyre’s splendid production of La traviata returns with a new cast and conductor for another stint. Ailyn Pérez, who sang Violetta on the Royal Opera’s 2010 Japan tour, now plays the role in the House. Her bright, well-rounded tone instantly impresses, ringing out clearly across the large space. Youthful and radiant, she looks the part too: a touch too healthy for a consumptive, perhaps, but delightfully coquettish in Act One. Her broad-brush coloratura left something to be desired, especially in the ‘Brindisi’, but her ability to sing softly without losing tone comes into its own in the poignant tenderness of the second and third Acts.

Her partner is Piotr Beczala, who has been taking principal roles at Royal Opera for several years; this is his first Alfredo. Vocally there were a couple of minor shaky moments, but on the whole Beczala boasts a strong, fluent voice and good stage presence. His contrasting arias at the beginning of Act Two were delivered with confidence, and his hot-headed passion in Flora’s salon suitably intense. Pérez and Beczala are well-matched and a dramatically plausible couple, and bring a genuine compassion to their intimate scenes. 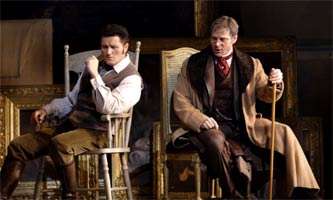 Simon Keenlyside, playing Germont for the first time in London after touring Japan, does not possess the deep basso profundo that has marked out many of the great interpreters of the role, but his mellifluous tone is notable in its own way and ensures an affecting ‘Di Provenza il mar. Grey-haired and leaning on his cane, Keenlyside cuts a sternly unbending father-figure.

Making his Covent Garden debut, Patrick Lange’s conducting is well-paced and lively. He does not quite mine the score of its full emotional potential, but he has a sure, sensitive touch. The ROH strings were wonderfully sumptuous, particularly in the Preludes to Acts One and Three.