“O Camelia, thou art sick”, as William Blake might have said (but thankfully didn’t). Although by no means ready for the compost, on this showing Richard Eyre’s evergreen production of La traviata, Verdi’s operatic setting of La Dame aux camélias by Dumas fils, does suffer from a touch of blight. The canker starts at the tap root – the conductor’s podium – and filters its way through much of the performance. 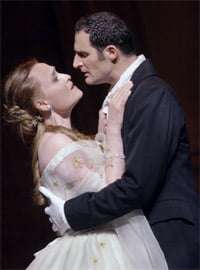 It is hardly the fault of Jan Latham-Koenig that the ROH musicians can play this over-familiar score in their sleep, but the fact that he sanctions their doing so doesn’t speak well of the working relationship. The Orchestra of the Royal Opera House began the current season on blistering form with Il trittico and Faust, which makes it all the more disappointing to hear this routine evening of note-bashing and to witness – from the Balcony – a level of disengagement that allows all four horn players, resplendent in eye-catching Daz-white shirtsleeves, to slope out for a fag (or some such) even as Violetta is wheezing her last. When they drift back to the pit, barely five minutes later, they distract us with their visual radiance for a second time. Is this approved house practice? I doubt it; but, if rules can be bent on a hot evening, let the shirts at least be black.

Jan Latham-Koenig’s limpid account of the Prelude raised expectations, although these were dashed as Act One grew in complexity. Shaky co-ordination between pit and stage put paid to any hope of an organic reading, and the uncomfortable listening experience was compounded by an absence of chemistry between Marina Poplavskaya’s Violetta and the Alfredo of James Valenti. Revival Director Harry Fehr is wrong to assume that the audience knows who’s who and what’s what in this busy act; I am certain that some first-night spectators will have been mystified by the heroine’s state of health, by the hero’s state of mind and by both characters’ gawky, ill-focused representation of love at first sight.

The role of Violetta needs a pure legato and a rich, sweet centre to accentuate the reformed courtesan’s inner goodness. The score demands nothing less. Poplavskaya was vocally clouded and tonally uneven; moreover, her asides lacked definition, with a tendency to inaudible drop-out when a line dips low. For stretches of that crucial first Act, she was barely in role. As her suitor, Valenti demonstrated to his cost that it takes more than a fine instrument to sing Verdi. The brindisi, ‘Libiamo ne’ lieti calaci’, showed both the tenor’s strengths and limitations: he relished the long lines but during ornamentations and vocal bounces the notes were approximate. As for ‘Dei miei bollenti spiriti’, his Act Two opener, Valenti’s physical stolidity and squeezed high tessitura made a nonsense of the aria’s carefree lyric. 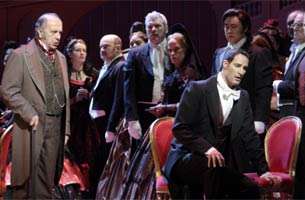 Matters improved with the appearance of Leo Nucci as Germont père, revisiting the role he created in this production back in 1994. Anno domini may be scuffing the voice these days, but the characterisation is absolutely in place; besides, a touch of croaky old age seems perfectly reasonable in the father of a grown-up son. It makes his extended scene at the conclusion of Act Two/scene one emerge as properly care-worn and troubled – qualities that elude him in Solti’s recording of 1994, where he merely sounds tetchy.

The Royal Opera Chorus has been enhanced for the occasion, presumably to allow the company to cope with presenting so many chorus-heavy operas in quick succession, and the acrobatic table-top dancers are lithe and committed. The ensemble work still has some residual benefit from Richard Eyre’s personal intervention for the revivals in 2010. As for Bob Crowley’s monumental designs, they are as always the star of the show, their foundation of naturalism lightly salted with Expressionistic touches. With a cascade of performances lined up between now and January 2012 (twenty-two in all), and a triple-relay-team of casts to be nurtured, there is always pleasure to be had from the constants even when, as here, the transient elements are less than ideal.