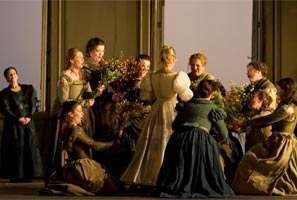 With David McVicar on hand to rehearse a new cast for this third revival of his 2006 production of “Le nozze di Figaro” this was anything but a routine resumption. McVicar had obviously worked closely with the fresh ensemble and had the singers enacting some new and stimulating ideas and playing to their individual and collective strengths. The overall feel was darker and more intense than I recall earlier performances, and it accorded with Sir Colin Davis’s nicely autumnal reading of the score. Tanya McCallin’s simple, changeable and atmospheric designs still look great and facilitate seamless transitions between the various acts – most effectively between the final two as the evening jollities of Figaro and Susanna’s wedding morph into the more dangerous intrigues of the gardens by night.

This was very much an evening belonging to the men. McVicar is at pains, even with the behaviour of the servants constantly spying or observing the action, to demonstrate the complex hierarchy within the Almaviva household, where woman are the subject of constant scrutiny and suspicion. The undoubted ruler of the roost is Mariusz Kwiecien’s assertive, predatory and yet very charismatic Count Almaviva. Kwiecien’s robust baritone was heard to great advantage and he was entirely credible as the continually thwarted aristocrat. He made great play of words in both recitative and in ensemble. He also has a natural stage presence, an expressive face and plenty of swagger. This Count’s bouts of anger and jealousy were credible and added a sense of danger that made the more comedic moments such as the emergence of Susanna from the wardrobe or his treatment of the Countess slightly uneasy. 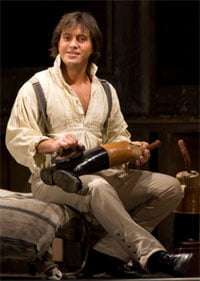 Opposite him was Erwin Schrott’s entirely re-thought interpretation of Figaro (previously heard in this house under Antonio Pappano) – very much more serious in approach than before. This Figaro was certainly testing his mettle against the Count and there were moments when the confrontations felt potentially explosive – especially at the end of Act Three. This Figaro’s relationship with his Susanna was not as easy-going as many, and there was a sense that the behaviour he disliked in the Count he was quite capable of emulating. His resonant bass-baritone seems to have acquired some darker hues. He too made much of the varied pace of recitative with the aid of Christopher Willis’s sprightly harpsichord continuo.

It was a bit of shame that the principal ladies were not quite in the same league. Annette Dasch’s Countess was an accomplished piece of acting and she had a dignity that eludes many interpreters. It may have been nerves but her two big arias needed far more poise. Some of the higher phrases were not floated as one might wish and certainly did not demonstrate dynamic finesse. True, ‘Porgi Amor’ must be a nightmare to sing cold, but ‘Dove sono’ also found her lacking breath to sustain it at the rather leisurely tempo that she and Colin Davis adopted. This was a shame as elsewhere in ensemble she had some excellent moments and her rich vocal quality was much in evidence. She too seemed to relish the recitative and got many of the laughs from the audience, and also engaged its sympathy when she challenges and forgives her errant husband. Eri Nakamura’s Susanna was a rather serious interpretation, and her voice seemed a tad underpowered and tonally unvaried for a house the size of Covent Garden. Under stress there was an occasional edginess to her singing, though her ‘Deh, vieni’ had simplicity and sincerity in abundance. Dramatically one did not always get Susanna’s more mercurial and quick-witted facets and this was needed to provide contrast to the interpretations around her.

In the smaller roles there was an abundance of experience and talent. Marie McLaughlin, once one of the best Susannas in the business and a stalwart of the old Johannes Schaaf production during the Haitink years, was a feisty, mettlesome and attractive Marcellina – making Susanna’s jealousy of her much more credible. She had a great rapport with Robert Lloyd’s impressively sonorous and amusing Dr Bartolo – and it was fun to note that these characters retained a certain interest in one another. Peter Hoare’s camp and oleaginous Basilio made his mark, and Jurgita Adamonytė (replacing Christine Schäfer) was a touching Cherubino who was rather more restrained than some, but to humourous effect. Adamonytė sang very touchingly too and her arias were nicely contrasted in mood. Messrs Gillett and Folwell made what they could of the few opportunities their characters get.

Colin Davis’s conducting was mellow and loving – and it certainly had pace and variety, the ROH Orchestra very responsive to him; and he also catered to the needs of the singers. Some might consider the reading lacked sparkle or easy vivacity but McVicar’s re-thinking certainly did not need that more ‘traditional’ approach. This is absolutely not to suggest that those that like their productions to be that way will be disappointed – for there is much to amuse. One particularly telling moment was the way the potential credibility problem of the differences in height between Susanna and the Countess was resolved in the final act – genius!