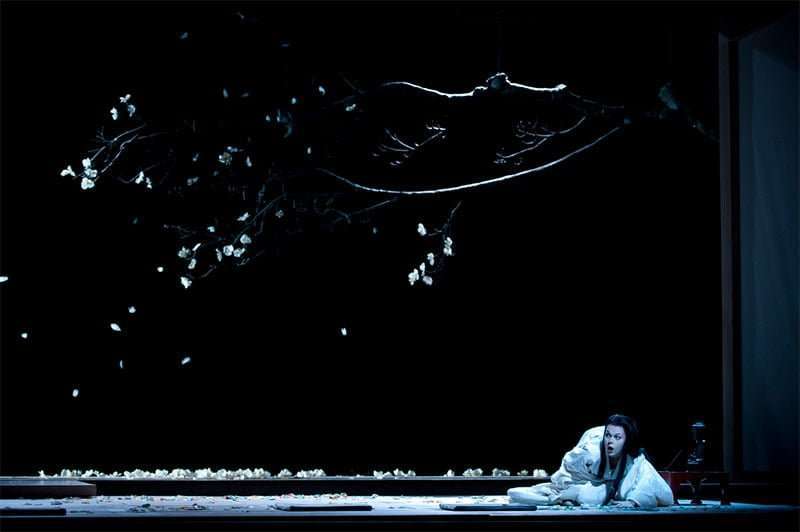 When this production of Puccini’s Madama Butterfly, first seen here in 2003, was last revived, in 2011, Kristine Opolais took over the title role at short notice, and, with her husband Andris Nelsons conducting, sparks flew. Opolais is back for most of this run, now led by Nicola Luisotti, San Francisco Opera’s music director. Despite misgivings about the Leiser & Caurier staging (here directed by Justin Way), she makes this revival unmissable.

The production is dependable, based on a minimalist Japanese house with sliding panels working overtime, revealing kitsch backdrops of cartoon-like landscape paintings and starry firmaments. There are plenty of cherry-blossom-type clichés and one tacky miscalculation – where Butterfly, in her death throes, falls to the floor flapping her voluminous kimono sleeves like butterfly wings, with that cherry-blossom falling clunk to the ground to emphasise the clunking metaphor. 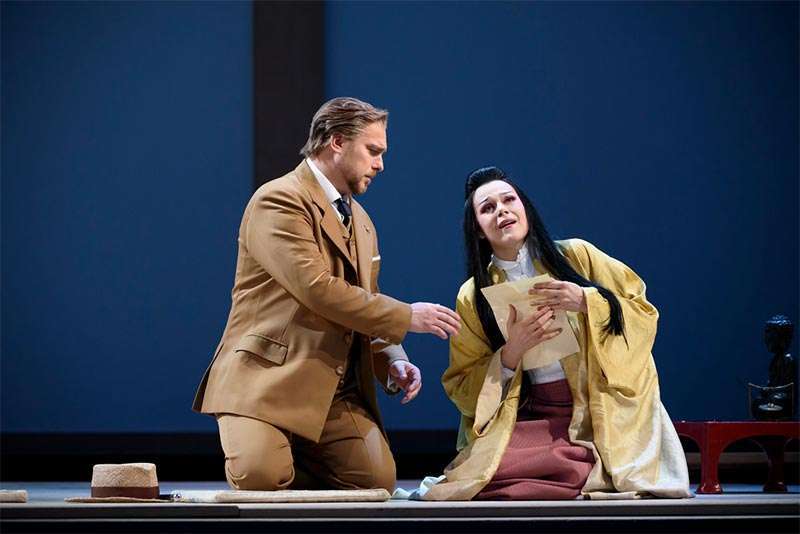 Opolais transcends all this and gets to the heart of an innocent girl fast-tracked to tragic maturity. Without being twee or girly, this tall and elegant Latvian makes the 15-year-old Cio-Cio-San credible, mainly by reducing her voice to an expression of tremulous expectation, only letting it fill out when she removes her sash in preparation for her wedding night. The singing itself is remarkable. Opolais’s control of the flexible, sculptured phrase, of sighs, a subtly fluttering vibrato, elegant portamento and a thrillingly sexy lower register is impressive enough. When applied to character, the result is overwhelming, and threading through her technical accomplishment is a voice of great beauty and personality – as those who heard her in the Royal Opera’s recent Manon Lescaut can testify. The fact that she held a bit back from full-on Italian emotionalism is a big plus, and only deepened her portrayal. The love scene and ‘Un bel di’ (One fine day) instantly connected with the crux of Puccini’s Japanese tragedy, and Opolais kept us with her at every tightening of the emotional screw.

For once, Cio-Cio-San had a Pinkerton worth throwing herself away for. The American tenor Brian Jagde (making his Royal Opera debut) rightly dominated the first Act. To go with his good looks, Jagde’s voice has the heroic lyricism and passion that suits Pinkerton’s reckless seductiveness, and its occasional hard edge, whether intended or not, was a brilliant expression of Pinkerton’s lacerating arrogance.

The production makes Suzuki more assertive than is the norm, and Enkelejda Shkosa, often sounding more contralto than mezzo, made her very lively and sympathetic. Interestingly, though, Sharpless, whose “Damn you, Pinkerton” can be so telling, is not directed with such imagination, although the role was decisively sung by Gabriel Viviani. Similarly, Prince Yamadori is denied depth as Butterfly’s potential savior, despite the baleful authority of Yuriy Yurchuk’s singing. Carlo Bosi’s elegant singing and intelligent acting kept Goro away from being a caricature. Luisotti, as well as unleashing waves of orchestral drama, also threw a light on Puccini’s many influences in this score, brought to vivid, atmospheric life by the ROH Orchestra.