The Orchestra of the Royal Opera House
Bruno Campanella 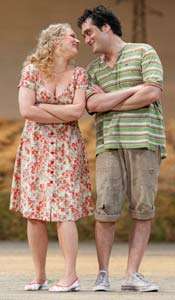 Laurent Pelly’s fun and unpretentious production of “L’elisir d’amore” – Donizetti’s first major success – returns to Covent Garden for its first revival. It does not have the makings of a classic production but it is pleasing on the eye and it is suitably ‘busy’ for the frenetic and humorous antics of the story. Set in a rural Italian village of the 1950s there are hay-bails piled high and young couples riding Vespas. Sunny and light. What a pity that this is not reflected musically.

Bruno Campanella, no stranger to bel canto repertoire, led an account of the music that was loving and rich in sonorities but lacking deftness of touch; the ROH Orchestra is immersed in Wagner at the moment (a run of “Lohengrin” is concurrent). Too often the intensity of the sound overwhelmed the excellent Chorus and did not inspire a fun and sparkling opera. There was also smudgy ensemble.

In the role of the lovesick, not-too-bright farm-boy Nemorino, who wins the heart of Adina, is Giuseppe Filianoti. He puts his being into the role, bounding about, very expressive with his acting but his singing was disappointing. That most-famous of tenor arias, ‘Una furtiva lagrima’, which made Caruso a star, failed to elicit that he now knows Adina loves him. Elsewhere, there was breathlessness making it difficult for him to be heard. 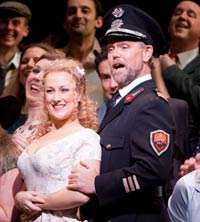 Diana Damrau’s account of the landowner (and so desirable) Adina was similarly disfigured by uncertainty, though stage directions hinder her characterisation. For someone Adina’s position she ought to be a little more dignified, yet she wants to fall for the dashing Belcore, rather than simply seeing where things might go with him. It was a deflated, leaden performance that did not get going until after the interval, when Damrau managed to be more convincing, matching Adina’s motivations – which range from delaying her wedding to Belcore so that she can sing of her love for Nemorino.

The other two main parts were more successful. As the supplier of the faux elixir the quack Dr Dulcamara found Simone Alaimo on sparkling, comedic form, with excellent patter. His voice is big and commanding, making his sales pitch for his ‘love potion’ wonderfully surreal and believable, even amiable, and surely exactly what is needed for someone selling nonsense dressed as a panacea.

Nemorino’s competition for Adina’s hand is Belcore, sung by Anthony Michaels-Moore. Again, like Alaimo, he relished the fun that can be had with his debonair part. It was pleasing that the character was not played as a conniving womaniser with a malicious streak, but rather as a man trying his luck. Eri Nakamura’s Giannetta, a Young Artist of the Royal Opera, made a notable impression as the farm worker who rallies the chorus girls at various moments; she is a talent to look out for.

There was much to admire but when the principal parts’ performances inspire less than ideal and the fun in their roles is played-down it’s a shame.