Donizetti
L’elisir d’amore – Melodramma giocoso in two acts to a libretto by Felice Romani; sung in Italian with English surtitles 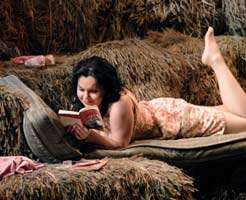 The Royal Opera has a new “L’elisir d’amore” that replaces the much-revived 1975 production by John Copley, one that was very colourful and had a picture-book quality about it. It was looking dated, and its charms were probably fading.

The new one could not be more different. Laurent Pelly’s production updates the action to a realistic rural Italy of the latter part of the last century. The first scene and the second act are dominated by hay-bale-mountains on which the characters move around. The second half of the first act is set outside a roadside tavern, with ploughed fields and electricity pylons running into the distance. The presentation is that of an impoverished farming community. Costumes for the inhabitants are therefore generally scruffy, and only Sergeant Belcore and his two sidekicks are dressed smartly.

Essentially Pelly plays the action relatively straight, and focuses on Adina’s growing emotional awareness of Nemorino’s love for her, and her response to that. Like his other Donizetti production at Covent Garden, “La Fille du régiment”, he does indulge in a few visual gags, but mercifully these are not overdone as this piece does have its serious side. Occasionally the settings hamper. Nemorino’s ‘Una furtiva lagrima’ was probably spoiled for abut a third of the audience by Stefano Secco being placed atop a hay bale to the right-side of the stage almost tucked behind the sides of the proscenium arch, rendering him invisible to everyone placed on that side of the house. Why this disdain for the audience, some of whom will have paid rather high prices for their seats? It’s surely part of basic directing to have characters visible. This may be a production imported from a theatre elsewhere with a different layout (Opéra National de Paris), but since the original director has been hired can he not modify his staging for the new space? It is not a mistake that an ‘old-fashioned’ director like Copley would have made.

Things were not altogether settled on the musical side either. Mikko Franck is not a particularly obvious choice a conductor for Donizetti, and there were moments where ensemble was not quite as tight as one might have hoped, and occasionally there were some rather startling gear-changes in tempo that appeared to be there to allow the singers to accommodate their more florid moments of their parts. This was particularly true in the duet between Adina and Dulcamara duet. Additionally, Franck sometimes allowed the orchestral blast to drown the principal singers. That being said there was much to enjoy in his infectiously spirited interpretation of the composer’s tuneful score. The wind playing at the start of the overture set the pastoral scene very nicely, and the brass had a nice mock swagger at Belcore’s entrance. The bassoons seemed to be having a field day. I particularly enjoyed the prominent timpani rolls that accompanied the chorus of ladies and Giannetta’s ‘Saria possibile?’ when they discovered that Nemorino had inherited his uncle’s fortune.

The singer who perhaps made the greatest impression was Paolo Gavanelli who is normally associated with big Verdi roles. This was apparently his role debut as Dr Dulcamara and it is already a fully rounded interpretation both vocally and visually. It’s a gift of a part if you have the patter technique, and how wonderful to hear it sung by an Italian singer able to put the words over and in a voice that is still supple and resonant. He managed also capture the disreputable nature of the character without making him repellent, and almost with charm. I’d probably have bought a bottle of elixir off him! 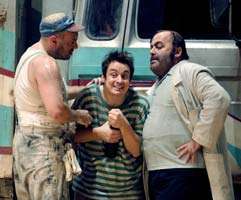 Stefano Secco’s Nemorino did not seem to get off to a particularly relaxed start. In ‘Quanto è bella’ he sounded a little bit constricted and tentative and he gave the impression of breathlessness by putting rather a lot of aspirates into the fluid vocal line. Thereafter he did warm up and once he’d ‘had a drink’ he seemed much more relaxed both vocally and dramatically. Secco’s placing during the first stanza of ‘Una furtiva lagrima’ aside he delivered a well-controlled account of it, although perhaps lacking the melting beauty of tone that say Pavarotti brought to it. (These Royal Opera performances are dedicated to Pavarotti’s memory.) The updating of the action probably makes interpretation of this role harder, as it’s difficult to play the lovelorn and rather simple character set within a rather more knowing society. Thus in the early part of the opera he was left looking a bit hangdog and waving his arms rather aimlessly. Once the character’s inhibitions were released by ethanol his performance developed a nice sense of liberation and abandon.

The updating similarly did not always help Aleksandra Kurzak’s Adina. Initially one wondered why such an attractive and feisty girl was still stuck in the countryside when a quick trip to town would probably have found her a good looking and wealthy partner. Her leading on of Ludovic Tézier’s robustly sung if somewhat charm-less Belcore was certainly very cool and calculated, but she did manage to evince the character’s vulnerability convincingly. Vocally she has all the technique and vocal allure for the part, but the voice is not quite big or bodied enough for this house. She tended to get lost in ensemble when singing within the middle of her range, and did not ride the climaxes effectively either, although the orchestral volume may have been partly to blame. The same was true of Kishani Jayasinghe’s playful Giannetta. The chorus seemed on particularly fine form, and, as Pelly is excellent at integrating a chorus into the drama by providing these singers with a distinct character and identity, they made their presence felt.

Once again The Royal Opera programme is full of interesting articles, and there is also a tribute to Luciano Pavarotti including photographs of his beaming charming Nemorino from performances in the old ROH production, as well as others from its many revivals that leave one with a nostalgic reminder of its many charms. That is as it should be, but Pelly’s new production is of its time, and will probably revive well too!